She blocked a black man from entering his own building, then followed him to his door. 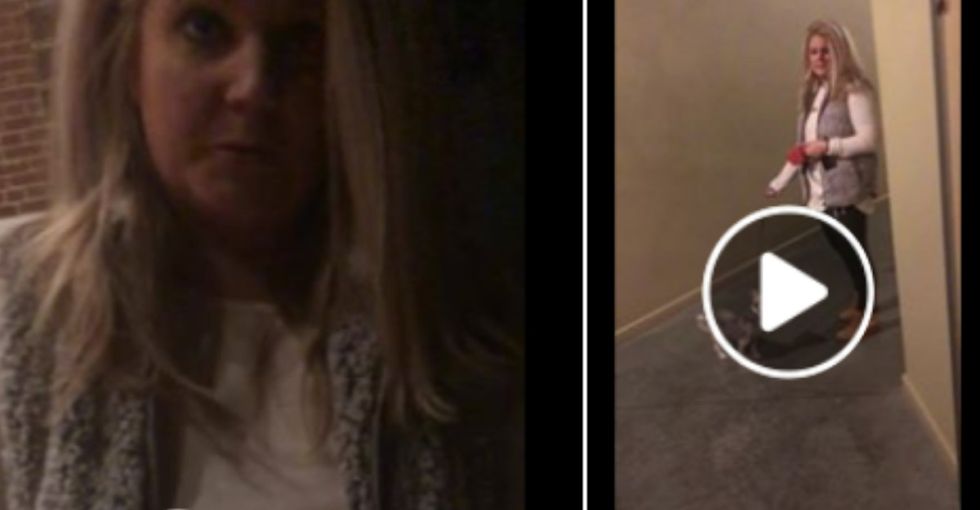 Why do some white women insist on harassing black people for living their lives?

We've seen the stories of Permit Patty, BBQ Becky, Pool Patrol Paula, and other white ladies calling the police on black people doing normal, everyday things. Apparently, some have not yet figured out that black people can, you know, live lives.

This past week, we've added Walmart Wendy, who called the cops on a black man who was babysitting two white kids because she had a "funny feeling." (Has anyone ever called the cops simply because they saw a white person caring for two black kids? That's a no.) Then Cornerstore Caroline traumatized a 9-year-old black child who accidentally bumped her with his backpack, claiming he grabbed her butt, making lewd gestures toward him, and acting like she was calling the police to report a sexual assault.

And now we've got Apartment Ashley, who tried to block a black man from entering his own apartment building and followed him to his front door because she felt "uncomfortable" and didn't believe that he lived there.

D'Arreion Toles shared videos of the woman blocking him from entering his building.

According to CBS affiliate KMOV, Toles was returning from a late night at the office when the incident occurred. As he tried to enter his luxury apartment building in downtown St. Louis, he was stopped and questioned by a white woman.

The woman can be seen asking why he was trying to enter her apartment building. When he told her he lived there, she asked him what apartment he lived in — all while physically blocking his way into the building. He calmly told her he wasn't going to give her that (personal, private, none-of-her-business) information, and said, "Excuse me" as he tried to go past her. But she blocked his way and said, "I'm uncomfortable."

To Be A Black man in America, & Come home,Women tries to stop me from coming into my building because she feels...

I'm all for women being assertive when they feel uncomfortable, but let's just back up here a minute. She's blocking him from entering his building. She's asking him for personal information. She's refusing to believe him when he offers proof of his residency and refusing to let him by . . . and she's the one who's uncomfortable?

Not only did she try to stop him from entering the building, she followed him into the elevator.

Once Toles moved past her, undoubtedly feeling more than a little uncomfortable himself at this point, Apartment Ashley followed him to the elevator. Despite his being nothing but calm and polite, despite his having named the people who manage the building, and despite his having a key fob for the building, she felt the need to follow him and repeatedly ask him who he was there to see.

Now, her behavior here begs the question: If she was really concerned about security and worried that this man might be some scary bad guy of some sort coming into her building, why did she get on the elevator with him alone?

Could it be that she wasn't actually afraid of him, but rather afraid of the idea that someone who looked like him might live in her building?

Not only did she follow him into the elevator — she followed him all the way to his front door.

Even after Toles told her that he was considering calling the police to report her for harassment, this woman still insisted on following him all the way to his front door.

Only at this point, she starts to tell him that if he really is a neighbor then she wants to introduce herself and get to know him. And even after he showed her that he was in the apartment, with his key in the lock, she still stood there trying to tell him she just wants to know his name.

If this were a one-time incident, we could chalk it up to a wacky woman with some serious boundary issues. But it's not.

Could the woman have been inebriated, as some suggest? Sure. Is it possible that this woman has some mental issues? Yep. Does that mean racism was not at the heart of this incident? Absolutely not.

Practically every black person I know has a story that fits the category of "White person freaking out because a black person is doing normal life things." It's not unusual. It's not a one-off. Some may say it just seems common because we're seeing viral videos of these kinds of encounters, but it's actually only a fraction of encounters that get filmed and sent around on social media.

Ironically, the woman actually worked for a luxury apartment company, but has since been fired. A statement from her former employer reads:

“The Tribeca-STL family is a minority-owned company that consists of employees and residents from many racial backgrounds. We are proud of this fact and do not and never will stand for racism or racial profiling at our company. After a review of the matter the employee has been terminated and is no longer with our company.”

Poetic justice, I suppose. But for Toles and other Americans of color who put up with this kind of crap regularly, true justice won't come until we root out the racism that causes such incidents in the first place.