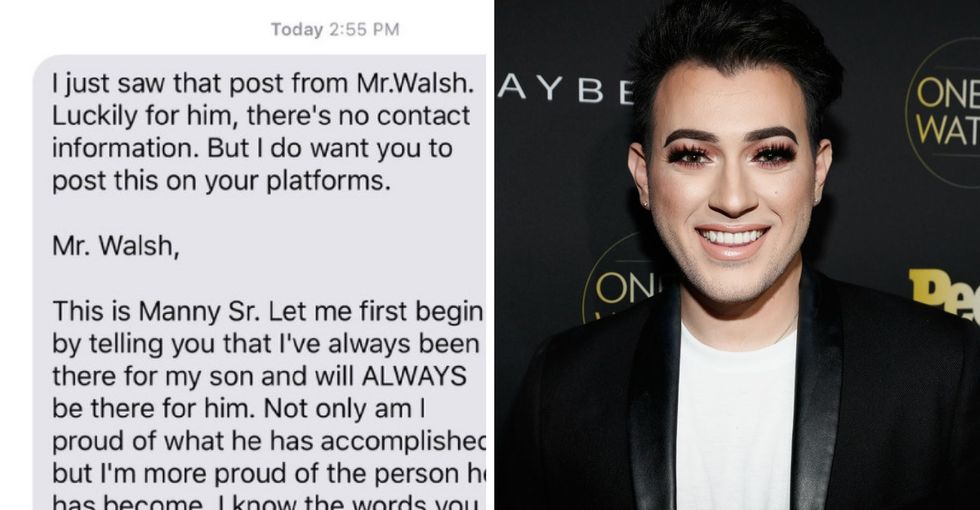 This article was originally published on January 18, 2017

This is YouTuber and makeup guru Manny Gutierrez.

He's taking the beauty world by storm, one tweet at a time.

Maybelline just recruited Gutierrez to be the face of its new mascara campaign — the very first time the role has ever been given to a man.

From a promotional standpoint, the move was a smart one. Gutierrez has amassed millions of social media fans who follow him for his expert makeup advice and hilarious online presence.

But with all the extra fanfare lately, Gutierrez, who is openly gay, has attracted some unwanted attention too.

On Jan. 6, 2017, conservative blogger Matt Walsh tweeted out a photo of Gutierrez, writing, "Dads, this is why you need to be there to raise your sons."

Dads, this is why you need to be there to raise your sons.pic.twitter.com/8ybirgppKi

Needless to say, Walsh's tweet — which racked up nearly 5,000 favorites and over 1,600 retweets — encapsulates a whole lot of bigotry and ignorance in less than 140 characters.

Walsh's rhetoric wasn't just harmful, though, it was factually incorrect too.

Gutierrez's dad, "Manny Sr.," has been there for the social media star.

In fact, he's been one of Gutierrez's biggest supporters.

After Walsh's example of fragile masculinity went viral, Manny Sr. — who works for his son and is "so proud" of him — decided to throw in his two cents. He wrote a message addressed to Walsh and asked Gutierrez to share it on his social media accounts:

My dad is a fucken SAVAGE, I can't with him pic.twitter.com/iWceEmZ6L4

"Not only am I proud of what [my son] has accomplished, but I'm more proud of the person he has become," Manny Sr. wrote.

"I know the words you speak are from lack of knowing anybody from the LGBT community," he wrote. "If you did, you would soon realize they are some of the most real and kind hearted individuals that walk this planet of ours."

Fortunately, Manny's tweet with his dad's message has spread much further than Walsh's original hateful comment, garnering more than 12,000 retweets and nearly 60,000 favorites.

Gutierrez's dad's love for his son reflects a broader shift in parents who are accepting and supportive of their LGBTQ children.

While the popularity of same-sex marriage doesn't necessarily indicate progress on all queer issues, it does serve as a general barometer to gauge Americans' evolving attitudes on LGBTQ rights. And in that sense, we've come a long way.

Not only has national approval of marriage equality trended upward in recent years — surpassing 60% in 2016 — but, more specifically, parents of a certain generation are coming around to the idea too: A 2016 WedInsights study found that 60% of married same-sex couples reported having emotional support from their parents — up from 46% in 2013.

There are many more Manny Sr.'s out there.

In response to the letter, fans applauded Gutierrez's dad.

Whether it was through an abundance of exclamation points...

Can we have your dad for president?!

...or sending him a simple message of love via hug.

Fans loved Manny Sr.'s message of inclusion. And that message, of course, wasn't lost on Gutierrez either.

Hana Sofia Lopes was due to attend a highly prestigious even when her bag containing all her necessary items was lost.

Lopes had landed in New York Cit. Her luggage was stuck in Germany.

For Luxembourg-born Portuguese actress Hana Sofia Lopes, traveling overseas to hobnob with industry elites should have been a dream come true. But it quickly became a nightmare.

As CNN reported, Lopes had planned on visiting a friend in New York City before arriving in Montreal where the event would be held. It was an event she was eagerly looking forward to and had the perfect outfit for it carefully tucked away in her luggage.

Only the luggage never arrived.

The actress spent a week calling the airline during her New York stay, but all to no avail. Things didn’t look good. "Here I am in New York, with no clothes other than those I was wearing during the flight. No shoes. No brush for my hair. No makeup. No socks. Nothing. Just me and my handbag," she told CNN.
Keep ReadingShow less
faith in humanity
Joy

Keep ReadingShow less
lost items
Get stories worth sharing delivered to your inbox
By signing up you agree to Upworthy's privacy policy.
Joy

"We don't have that many more years to do something dumb and stupid."

Couple ties the knot in the mayonnaise aisle

Everyone does something a little outside of the norm at least a few times in their life.

Of course this isn't based in science, it's just an observation that likely keeps life interesting. A couple took a step outside of the expected when they decided to get married in the "mayonnaise aisle" at their local grocery store, Fry's Food and Drug in Casa Grande, Arizona.

The two were both strolling down the aisle looking for mayonnaise when their paths crossed and it was love at first sight. Denis and Brenda Delgado decided to exchange phone numbers and the rest quickly fell into place.

Keep ReadingShow less
wedding
Get stories worth sharing delivered to your inbox
By signing up you agree to Upworthy's privacy policy.
Trending Stories
biofinity energys
Sponsored