NY Post slammed for inciting violence against Muslim congresswoman over her 9/11 comments. 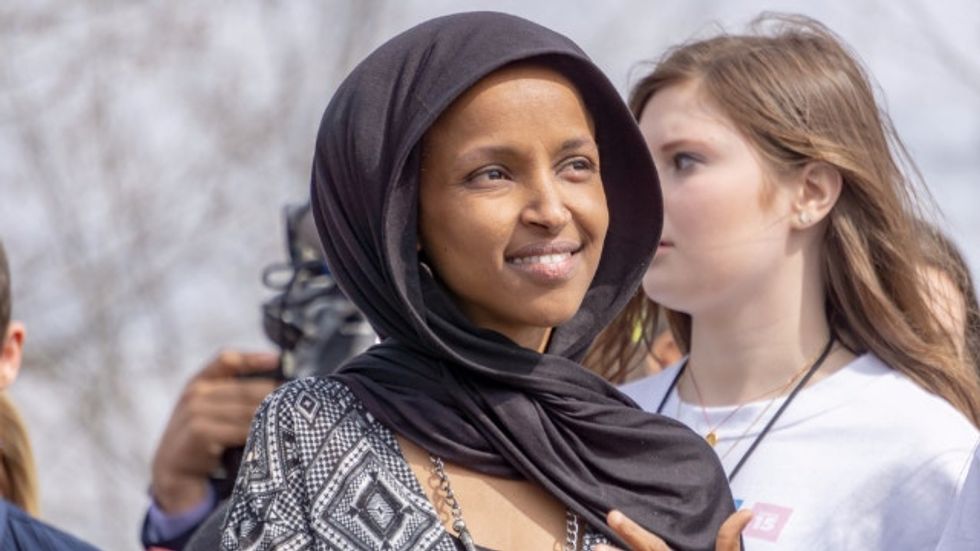 In a speech to the Council on American-Islamic Relations, Congresswoman Ilhan Omar discussed the Islamophobia Muslims received after 9/11, as many hateful racists associated every Muslim with the attack. On Thursday, The New York Post decided to prove her point with a horrific cover associating her with the attack.

"[The Council on American-Islamic Relations] was founded after 9/11 because they recognized that some people did something, and that all of us were starting to lose access to our civil liberties."

Right-wing media, and its members of Congress, decided to pluck out Omar's "some people who did something" clause and pretend it was an attempt to downplay the biggest terrorist attack on American soil in history, rather than its intended use of explaining that innocent Muslims are innocent.

First Member of Congress to ever describe terrorists who killed thousands of Americans on 9/11 as “some people who… https://t.co/fZmyD9cqwF
— Dan Crenshaw (@Dan Crenshaw) 1554831909.0

Without quoting The Post or fellow congressperson Dan Crenshaw, Rep. Alexandria Ocasio-Cortez (ever heard of her?) pointed out the hypocrisy behind the anti-Omar crusade.

Crenshaw has yet to support renewing the Victim Compensation Fund, a fund which compensates victims, but I'm sure 9/11 survivors appreciate all he is doing to whip up hate.

Just last week, the FBI arrested a man for allegedly threatening to murder Omar, and since then, the rhetoric has only gotten worse.

This is dangerous incitement, given the death threats I face. I hope leaders of both parties will join me in condem… https://t.co/UBPvu7Z1Jx
— Ilhan Omar (@Ilhan Omar) 1554913916.0

She also pointed out that President George W. Bush used the same language as her, referring to Al Qaeda as "people."

What kind of person would look at a terrorist attack and think, "very fine people on both sides"?

This article was originally published by our partners at someecards and was written  by Orli Matlow.

Keep ReadingShow less
culture
Get stories worth sharing delivered to your inbox
By signing up you agree to Upworthy's privacy policy.
Health

And there's a scientific reason that it's more common for women.

This article originally appeared on 02.13.18

You wear extra chunky sweaters. You've never met a mitten you didn't like. You may even keep a lap blanket at work.

You're one of those people who is always cold. And you are not alone.

Inside or outside, you just can't seem to get warm. This characteristic of yours manifests itself in extra blankets, wild heating bills, and enough complaints that you start going hoarse.