Not everything is terrible: 7 great things that happened this week. 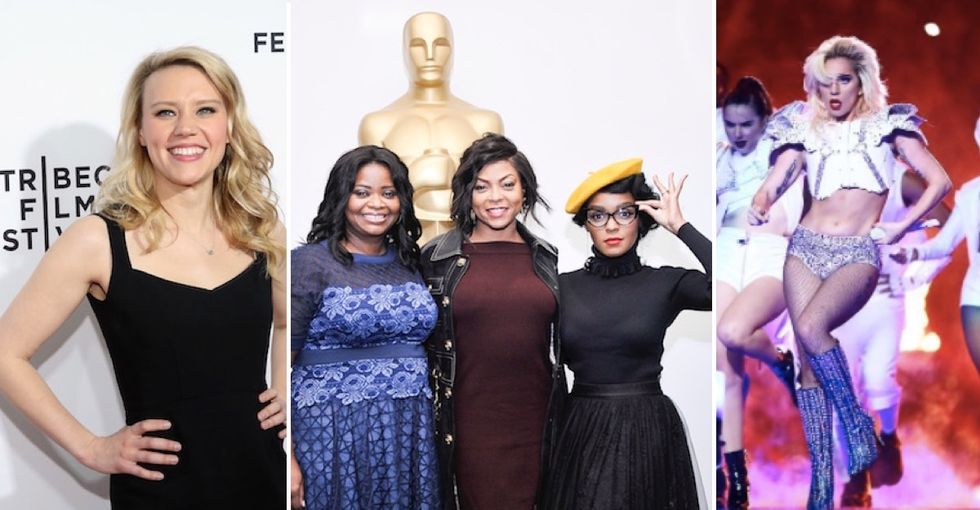 And it would take another 21 days to recap everything horrific, unacceptable, and plainly un-American that has happened since Inauguration Day.

So, instead, consider this a safe space. Give yourself permission to take a break from being angry, and check out these seven pretty awesome news stories you might have missed this week.

I'm betting you could use 'em.

The cast of "Hidden Figures." Photo by Kris Connor/Getty Images for Academy of Motion Picture Arts and Sciences.

If you thought only chiseled white guys could be Hollywood moneymakers, think again.

"Hidden Figures," the incredible true story of three black women who made landmark contributions to NASA in the 1960s, was released in mid-December. So far, it's grossed over $119 million at the box office, edging out its fellow Best Picture nominees, including "La La Land."

Money talks in Hollywood, and the more proof we get that diversity in film is both the right thing to do and can be good business, the better.

2. People tried to body shame Lady Gaga after her Super Bowl performance, but even more people shut them down.

While Lady Gaga was busy wowing millions of people with her high-wire act, powerhouse vocals, and precision dance moves, a few surly folks were a little overly concerned with how her bare midriff looked.

Obnoxious comments on social media were easy to find. But Gaga fans, and most good humans in general, weren't having it.

Gaga herself, of course, took the high road.

I heard my body is a topic of conversation so I wanted to say, I'm proud of my body and you should be proud of yours too. No matter who you are or what you do. I could give you a million reasons why you don't need to cater to anyone or anything to succeed. Be you, and be relentlessly you. That's the stuff of champions. thank you so much everyone for supporting me. I love you guys. Xoxo, gaga

PSA: We can drown out the hate if we all speak up for what's right together.

3. "The Magic School Bus" is coming back.

Admit it, you always wished you could be in Ms. Frizzle's class as they shrunk down to explore the inner workings of the human body or blasted off on a deep space adventure.

Well, you still can't. But soon you can enjoy all new episodes of everyone's favorite after-school show!

And the absolute best part: The brilliant Kate McKinnon, of "Saturday Night Live" fame, will voice Ms. Frizzle in a Netflix reboot set to debut later this year.

This is my kind of good news.

Do you live to work, or do you work to live? If you're like most people, there is at least one thing more important than the ol' 9 to 5: family.

So kudos to the people at Facebook who just announced some great, progressive changes to their leave policies. According to COO Sheryl Sandberg, the new policy will give employees dedicated and paid time off for grieving and caring for sick family members on top of the company's already pretty good parental leave.

There have been many times when I've been grateful to work at companies that supported families. When my son was born...

It's great to see forward-thinking, people-first policies coming from some of our country's most influential companies.

5. A guy created an Amazon Dash button so he could easily donate $5 to the ACLU every time Donald Trump made him mad.

Hey, you know Dash buttons, right? They're the supposed shopping device of the future, making getting laundry detergent delivered to your home as easy as hitting a button above the washing machine. Or you could put a button in the mug cabinet that orders coffee the instant you run out.

Well, designer and programmer Nathan Pryor decided to take this concept to the next level and create a button he could smash every time he read a baffling tweet from President Donald Trump. Each time, it would donate $5 to the American Civil Liberties Union.

Unfortunately, this isn't an "official" thing, so not everyone can get one, but it is a great reminder to try to channel your frustration into something productive.

You can donate to the ACLU online right here, in fact.

6. Oh! And speaking of Trump, even Kanye West is turning on him now.

There are few things as disgusting as entertainment industry schmoozing that won't quit, and Trump has certainly rubbed elbows with a lot of famous people. Many of his old golf buddies and party pals still refuse to denounce him. (Looking at you, Tom Brady.)

But we can finally scratch Kanye West off that list.

Yep, even Yeezy has had enough of Trump's shit. According to TMZ, Kanye has deleted every mention of Trump from his Twitter timeline and no longer supports the current president.

I know, I know. It's Kanye and who cares, right? But while watching the country slowly become unrecognizable largely in part because none of Trump's friends and allies will stand up to him, it's hard not to be excited about any sign of pushback.

7. A review board told Comcast to stop saying it has the fastest internet: a big win for objective facts.

How is Verizon winning a case against Comcast good news? I'll tell you.

Comcast has been claiming for a while to have the fastest internet in America. Verizon had data that suggested that simply wasn't true. So the National Advertising Review Board ruled Comcast had to stop making the false claim.

Someone lied, and there were actually consequences! In 2017, how is this not good news?

Now, if only the media would start covering terror attacks.

There's bound to be great news next week, too. You just have to look a little harder for it these days. But I promise you, it's worth it!