New U.S. citizens are racing to the polls for the first time this year. They told us why. 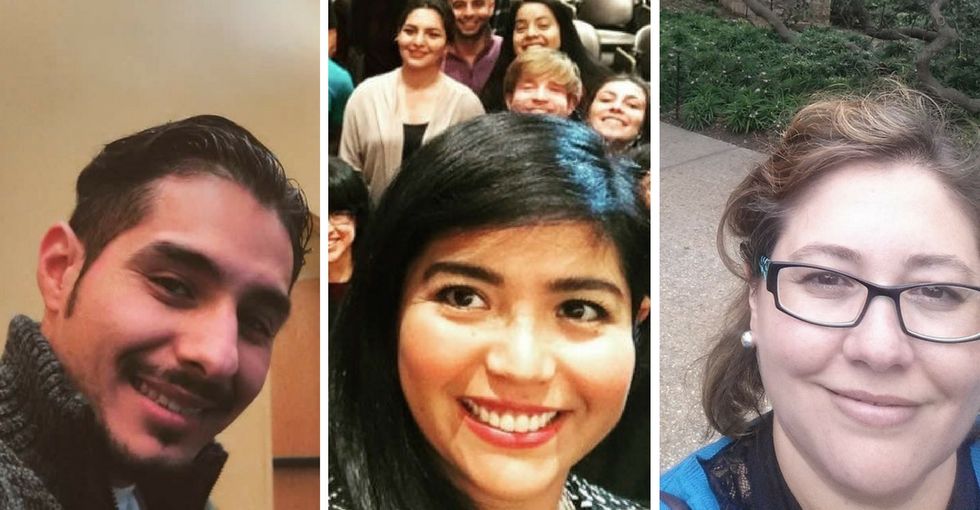 In 2016, the American melting pot is more diverse than ever before, and it's showing in who's heading to the ballot box on Nov. 8.

Despite warnings of low-voter turnout, a record-breaking 200 million people are registered to vote in the upcoming election. A large portion of that figure represents new U.S. citizens casting ballots for the very first time. If early indicators have told us anything, it's that these folks are putting their votes where their livelihoods are.

We spoke to four first-time voters from across the country who are also new U.S. citizens. Here's what they had to say about the 2016 presidential election.

(Interviews have been edited and condensed for clarity.)

Julissa Arce: A 33-year-old author from Los Angeles, California, who became a citizen in 2014.

"I had sacrificed so much to be able to be in this country. And to finally be recognized by my country as one of its citizens was a really beautiful moment."

Julissa speaking at The Berkeley Forum. Image via Julissa Arce, used with permission.

Why Julissa feels so strongly about voting: "If you don't vote, then you're letting someone else make decisions about how you're going to live your life. This election in particular, I can't fathom not going out and voting. It's the most critical election in our lifetime."

A critical issue she thinks needs more attention: "The media coverage around climate change hasn't been there. It's like a couple sentences here and there. And the reality is if we don't have a planet, none of these other things matter."

Her thoughts on Donald Trump: "The silver lining is that we have a clearer picture of the work that has to get done. The reason Donald Trump is where he is is because there are literally millions of other people who think like he does, who believe in the things he believes in. While that's a scary thought, it also shines a light on the fact that these issues have never gone away: racism, sexism, bigotry, xenophobia. It's not that they didn't exist in our country; they were buried."

Robin Wood-Mason: A 31-year-old director of development at a nonprofit preschool, who lives in Denver, Colorado, and became a citizen in 2014.

"The folks that think they'll just sit the election out — as a new citizen, it absolutely infuriates me that people take that process for granted and don't give it the respect that it deserves."

On misconceptions about immigrants: "It was interesting being a white male and being an immigrant [from the U.K.] and seeing how people perceive you differently. When you say, 'immigrant,' people assume Latino and other people of color, and it's been bizarre seeing how different people have responded to learning that about me."

The most important issue this election cycle: "The biggest thing for me has been the Supreme Court and wanting to make sure that whoever gets to appoint the next two to three justices shares a lot of my values. Hillary Clinton and the Democratic party far better align with what I think America's real values are or should be. We might actually be able to have a Supreme Court that values diversity and progressive issues and makes sure that people get to live with a sense of equality."

On his passionate support for Hillary Clinton: "My husband will tell you that I'm addicted to hitting the donate button in almost every one of the emails [sent from her campaign]."

An issue he thinks should be making more headlines this election: "I would like to see more conversation around renewing our support for AIDS research. Things like [HIV prevention drug] PrEP — making that widely available through Medicaid and Medicare — and coming up with other sources of funding for us to make sure we're really putting an end to the HIV epidemic, particularly as it's shifted away from being 'the gay guys' disease' that it was in the late '80s and '90s. Now that it's hitting people that are using injection drugs, and it's shifted into being more about poverty than anything else — how can we address that?"

Barbara Cenalmor: A 43-year-old engineer from Chandler, Arizona, who became a citizen in 2013.

"As a legal resident, you pretty much can do anything that a citizen can do except vote. And for me, I wanted to be able to vote — not only for president, but also on local level politics. It really affects my kids, my kids' schools, the city where I live."

Her take on a two-party system: "To me, it seems like the two-party system has not worked well. I think this year it's become clear that voting for the party does not work; it does not work for a lot of people. I've been here for other elections — and I've been in Spain, where elections are pretty brutal too — but how it's turning into some kind of reality TV show where everybody just rips everybody apart. It's stressing me out."

On disliking Trump...: "I definitely don't want Trump to be the president."

...but disliking Clinton only slightly less: "I'm a little bit disappointed with myself [for planning to vote for Clinton]. But I think that, if I didn't vote and then Trump won, I would be mad at myself — especially if he wins by a small margin."

On voting for things other than the presidency: "The two big propositions in Arizona, which [are] recreational marijuana and the minimum wage, I think they're huge. I'm still reading through them. I'm one of those people that, unfortunately, I cannot make decisions until I've done an incredible amount of research, which I know is exhausting. [laughs] It's just my personality."

On the outside world's view of Donald Trump: "I actually traveled to different European countries this summer, and everywhere I went, the question was, 'That's a joke right? He's not a real candidate?' It's embarrassing."

A critical issue she thinks needs more attention: "One of the most important issues lately is race and police. I don't think it's being very well addressed by either candidate. I don't think it's been a big focus, and it's a huge thing that's happening in the country — race relations in general. We need to sit down and figure out what's going on and how do we fix this."

Juan Carlos D. Ruiz Durán: A 29-year-old student from Olympia, Washington, who became a citizen in 2013.

"As a first time voter, I feel like I'm actually participating in the overall conversation more because I have these privileges now. Permanent residency almost makes you a second-class citizen — you get some benefits but not all. You can get a job here, live here, own a house, but you can't vote."

On why he stays focused on the issues — not the politics: "I would say, as far as the overall political system, I'm not totally engaged, but I am engaged in the activist side of it which advocates for diversity and equity within college, school, access to resources, and people's rights."

Why he's voting with higher education in mind: "I think, as far as our society goes, that's really where a lot of innovation and creativity comes from — college. Bill Gates and Steve Jobs [who both didn't graduate from college] are not typical examples of innovators."

On voting for Hillary Clinton after supporting Bernie Sanders: "Hillary has a lot more experience; she also has a problematic past. And it's not like I'm forgetting about that, but comparing that to the Republican base, which, to me, is just fanatical, like espousing the most ignorant stuff I've heard — and a few of my family are also Republican, who say the same stuff, the same problematic language — I've just transitioned [to supporting Clinton]. The lesser of two evils in a sense. But I'm optimistic policy will be more progressive."

On social justice around race playing a role this election: "There are extremes, but in the middle, there is a concise, very direct message: Stop killing black people and indigenous women and men and immigrant folks. That's really what's made this election cycle more colorful in that sense — you can see a lot more of people's colors and their opinions than before."

The coolest thing about our democracy is that it doesn't matter where you live or where you come from — you can have a seat at the table.

You just have to vote.

Not sure if you're registered? Find out now.

Wondering what day your state's registration deadline is? There's a website for that.

And don't forget — you might live in a state with same-day registration.

Don't watch from the sidelines Nov. 8. Make your voice heard.