'Love, Simon' star, on being bullied, fan reactions, and one horrible audition. 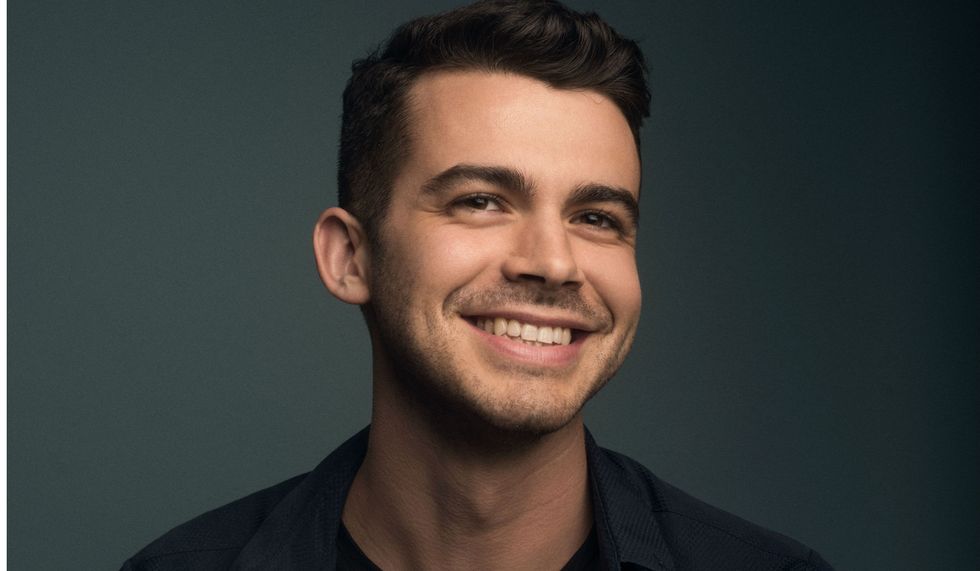 Joey Pollari says he was almost certain he didn't get the part in blockbuster teen film "Love, Simon."

During the audition, he embarrassingly mispronounced a word, stumbled nervously through his lines, and came dressed looking the part of the role he was auditioning for: a Waffle House employee. He was the only actor auditioning who did so.

It appears the waiter look didn't end up hurting his chances too much, though. The 23-year-old from Minnesota landed the role of "Lyle" in "Love, Simon" — Greg Berlanti's groundbreaking film based on Becky Albertalli's 2015 bestselling novel, "Simon vs. the Homo Sapiens Agenda."

In the film, Lyle plays a potential love interest to Simon, and there's a real possibility he's also "Blue" — a pseudonym for the gay classmate Simon is corresponding with romantically online.

Its big budget and wide release meant most young LGBTQ people across the country could see "Simon" at their local theater. That's never been the case with an LGBTQ-themed movie for teens before.

While the film opened to modest box office results after its March 16 premiere, a top rating from Cinemascore, rave reviews, and successful word-of-mouth slowly turned "Love, Simon" into a success in more ways than one.

For Pollari — who came out as gay at age 18, and had experienced bullying because of his sexual orientation — the film's themes hit especially close to home.

I sat down with Pollari to discuss the film's success, positive fan reactions, and the audition fail that totally wasn't.

On the moment it truly sunk in that "Simon" was a film like no other:

I probably learned it way too late. [laughs] I think it wasn’t until I saw the movie in a pre-screening that I thought, "Oh, this is weird, isn’t it? I’m watching a gay narrative on a major studio lot. 20th Century Fox made this. No one had to strong-arm them into getting it made, and it’s not fringe." That’s when it really hit me and dawned on me that a big step was being made.

On his personal similarities to — and differences with — Simon:

Our stories are somewhat related, in that the environment was productive for coming out — and by that, I mean supportive. But Simon and I were pretty different, I would say. I was a pretty fabulous kid. [laughs] I don’t think many people were surprised [to learn I was gay]. So that experience was different. I got bullied here and there for people thinking that I was gay. I see myself in Simon, but I see myself in Ethan, too, [actor] Clark Moore’s character.

On "Love, Simon's" impressive word-of-mouth heating up the box office:

It’s really nice that people are responding to it and want to go see it again, and are telling someone else to go see it. It shows that the people really want this movie and they want their friends to see it.

If we’re looking at it in an industry sense and financial sense, it’s doing really well, and maybe will help support more [LGBTQ-themed] movies getting made.

On fans reacting to the historic nature of the film:

A couple people have reached out — more than a couple — saying they either came out [as LGBTQ] because of the movie, or expressing their gratitude. You know, feeling appreciative they can see themselves in any way, shape, or form on the big screen.

Or, older people reaching out and saying, "I wish I had this movie when I was a teenager, but I’m happy to have it now." People have been really generous with it. I think that’s been the coolest part of the whole experience — how people have been responding to it.

On thinking he totally botched his audition for "Love, Simon":

I thought the whole thing was a stumble through. [laughs] I was the only one dressed in something that resembled a Waffle House uniform. I was like, "I’m so stupid, wearing this stupid uniform." It was a hat and collared shirt, tucked into pants. And I was there and thought, "You are such a nerd." [laughs] "Why are you here?"

I went to the audition thinking I was just going to be me during it. And then I was really being me when I pronounced "Hanukkah" wrong. I was nervous. It was a whole thing. I called my manager afterward and was like, "Well, that’s one for the books, onto the next!"

SPOILER QUESTION AND ANSWER BELOW.

On fans hoping Lyle was really Blue at the end of the film:

I did have some people who were rooting for Lyle to be up there on the Ferris wheel. Mostly my family, to be completely honest. [laughs]

Check out Joey Pollari — in all of his Waffle House uniform glory — in a trailer for "Love, Simon," below:

This interview has been condensed and edited for clarity.