Law enforcement gets a lot wrong. But here's what the Dallas Police got right.

Five officers were killed in a shooting in one of the nation's model police departments. 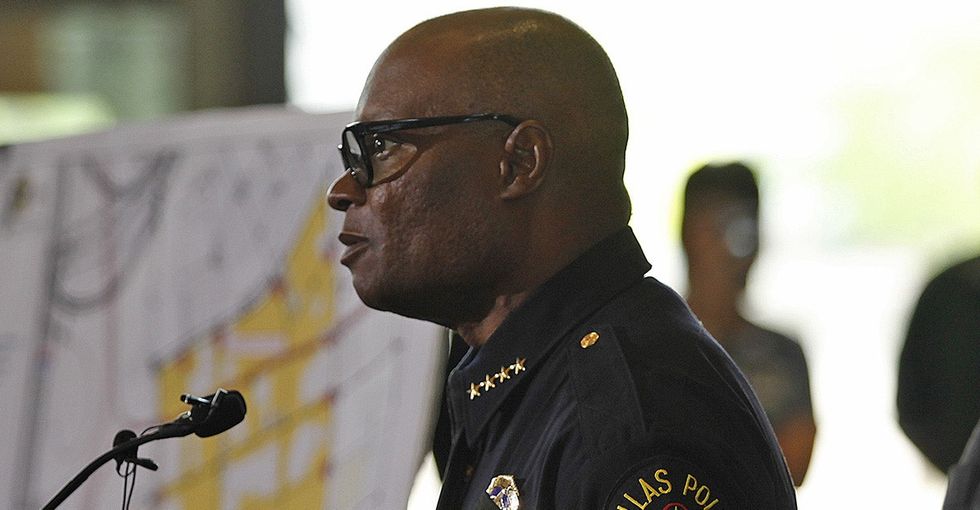 On July 7, 2016, 12 Dallas Police Department officers were shot along with a civilian who had marched in a Black Lives Matter protest.

Five of those officers were killed.

This news came at the end of a dim week in American history.

The Dallas shooting arrived on the heels of intense talks of the impact of gun violence in communities across the country and two high-profile police killings of black men Alton Sterling and Philando Castile. The number of civilian deaths by police officers this year has now surpassed 560 people.

All of this obviously demands a number of questions but especially:

What are we getting wrong? And is anyone trying to get it right?

Statistically speaking, the DPD actually was getting some stuff right.

Police chief David Brown has made some major strides in improving police engagement with communities of color through what some would call unconventional tactics (by former police standards).

And although the department is not perfect by any stretch, the DPD has actually become a model institution for many large, city-based police departments around the nation, especially those that struggle with civilian claims of excessive police violence, staggering homicide rates, and a large number of civilian deaths by cops. Most impressively, from 2009 to 2014, excessive force complaints were down a whopping 64% in Dallas, a statistic that should be applauded.

The reforms took a major overhaul, but a few key elements really started getting the job done. Here are some of the bright points:

1. They added new crime-fighting techniques to their department, all aimed at helping people in the community.

Under the direction of Brown, the DPD has implemented new techniques, including training on how to de-escalate high-stress situations. Professions such as therapy and nursing typically require their employees to learn de-escalating, or reducing the intensity of a situation, but police don't generally learn these skills.

Because police have long been taught to use force, the idea of backing off might seem ridiculous to some officers — but Dallas is proving that it actually works. Not only did these new skills help reduce homicide rates, but they also helped with the drop in excessive force complaints in recent years.

2. They've worked toward being transparent with people.

Again, they're not perfect, but they've tried really hard. After Brown met with White House officials in June to discuss police transparency, the Dallas police released information about the police force and shootings to everyone in their community.

According to the report, they used force more than 2,200 times last year. Of those instances, 11 shootings involved officers while the rest included situations where suspects were taken to the ground by officers, tasered, or hit with a baton.

With this information release came an opportunity to start a conversation in the community about how to be better. And that's really important.

3. They have been open to change.

As frustration and violence increased, the leaders of the department have reportedly become more accepting of constructive criticism. In a op-ed for The Dallas Morning News, Brown explained:

"We are by no means perfect; there is plenty of room for criticism. We continue to be open to changing policies, training and community engagement. My biggest hope is that I am holding true to what I told that police recruiter: 'I want to serve the community, sir.'"

It seems that the relationship between the DPD and communities of color, while strained, showed signs of progress during recent years, too. Witness accounts from the Black Lives Matter protests are evidence of that.

4. While evidence is still coming out about the assailant(s) in the Dallas shooting, Brown made it very clear during a press conference that militarizing his police staff isn't an option.

"We are not going to let a coward who would ambush police officers change our democracy," he said.

Black Lives Matter protestors are fighting against violence, not for it. Photo by Yana Paskova/Getty Images.

Communities of color live in fear of heightened homicide rates. Black men are especially susceptible to being killed by police in contrast to their white counterparts. Black people have higher incarceration rates. And our history with law enforcement in America is bleak.

But a willingness to change in law enforcement could help us improve.

As we mourn with the DPD, it's important to remember that there aren't just two sides to these issues.

Many have pitted Black Lives Matter activists and officers against each other this week, but the fact is that most folks in each group want the same thing: peace.

Honoring black people and cops isn't mutually exclusive: You can respect the lives of police while also recognizing the concerns and heartache of black Americans. And acknowledging the fact the police brutality is real and needs reform doesn't mean that you can't respect and appreciate police.

And while our police system needs improving, the DPD's recent record is an example of what happens when people in power listen carefully.

It shows us that when people in power react swiftly instead of dragging their feet and put their citizens over the set status quo, change is actually possible.

So this week, as we're mourning black people killed unjustly along with innocent officers killed in the line of duty, we should remember that the DPD is by no means perfect.