John Oliver flew 10 hours to Russia to interview Edward Snowden and get him on record. 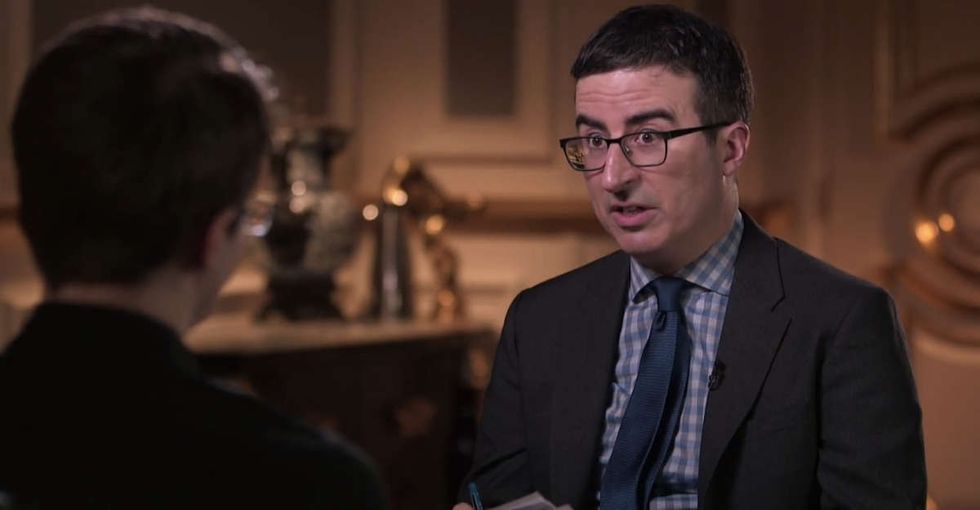 For those of you who aren't able to commit to the full 33 minutes right now, let me gist-ify this for you because it's important.

There is a shady, shady government program called Section 215.

It pretty much requires businesses to turn over customer records to the government for any reason whatsoever with only the most basic fig-leaf shred of justification required. Particularly phone records.

And sure, the provision still requires the government to ask the courts if they want to track your phone calls. But since those courts were implemented in the '70s, tens of thousands of requests have been made to see people's phone records, and the courts have only turned the government down about a dozen times.

And we know how easy it is for the government to collect these records because the information was leaked to the press in 2013.

They don't even know the name of the guy who leaked all this classified NSA information in the first place.

John Oliver was frustrated by this. But then he thought, "Hey! Maybe I'm just not asking these people the right question."

So he changed his strategy.

He started asking folks on the street how they would feel if the government were passing around naked pictures of them.

Sure enough, they got pretty animated.

Then, he did something extraordinary.

...to find out from Edward Snowden himself how easily the government could spy on naked pictures of people if they wanted to.

By showing him a picture. Of his own d*ck.

And asking if the government could legally see pictures of his d*ck under various NSA programs.

And in pretty much all cases, the answer was...

As it turns out, the U.S. government can pretty much see your junk whenever it wants without really having to go through much of a process to clear it with anyone.

I don't know about you, but I'm against that.

The Patriot Act is up for renewal this summer. If this bothers you, you might want to consider getting on the phone with your elected representatives — like, yesterday — and telling them exactly how you feel about them seeing HD images of your gonads. For, um ... security. National security.