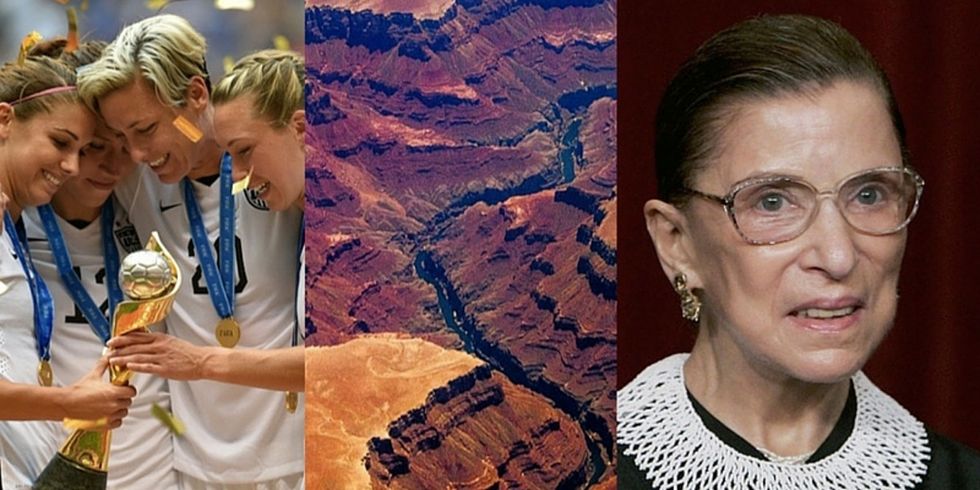 (Fun fact: The gun in the picture was made by the American subsidiary of a Belgian company that made guns for the Nazis in World War II. The only way Jeb's gun could be less "American" is if it was photographed shooting flaming bullets at an American-flag bikini.)

To which I respond: "Yes. Indeed. Welcome to the party. Grab yourself a drink."

While others responded in kind, posting images of weapons that they thought represented the spirit of other great nations and fictional planets:

Comedian Cameron Esposito took the opportunity to say perhaps America is better represented with images like this:

Naturally, many were quick to point out the problematic nature of using a gun to represent a country that has a massive and unflinching gun problem.

In 2015 alone, about 13,000 people were killed by guns in the United States, which isn't exactly something to be cavalier or patriotic about.

Whether you think America is about guns or diversity or a shockingly wide variety of Oreo flavors, one thing became clear in the wake of Bush's tweet: It's pretty hard to sum up America in a single image. But that's not going to stop us from trying.

Here are 13 images that inspire love for America way more than a gun.

We all love this big, beautiful, imperfect country. So why not take this opportunity to appreciate some of the things about America that actually are cool and inspiring and patriotic?

1. How about this picture of the U.S. women's soccer team winning the World Cup?

Tell me that didn't make you want to wrap yourself in an American flag and run around screaming, "We're the best in the world when it pertains to kicking balls into designated goals!" or something to that effect. America.

2. Or this photo of Neil Armstrong walking on the moon?

That's right. Italy might have amazing food and Japan has those nifty sleeping pods, but WE'VE BEEN TO THE MOON. I hear Brazil has beautiful beaches. That's cool. WE WALKED ON THE FREAKING MOON. Ireland has some cool cliffs. America? MOON.

3. What about a photo of American singer/songwriter Bill Withers?

If Bill Withers doesn't make you love America, nothing will. Bill Withers wrote "Lean on Me." Can you fathom that for a second? He sat down and wrote "LEAN ON ME!" When he released "Ain't No Sunshine" in 1971, every human being on the planet should've been lining up just to grab a handful of the American soil that sprouted this national treasure.

4. Or hey, how about TV and film actress America Ferrera?

Not only is she a talented and socially conscious actress bringing some much-needed diversity to primetime television, but her name is America! Her literal name is America. When she makes a reservation at a restaurant, someone has to actually yell out, "Table for America?" That's a table I want to sit at every night.

5. Here's another great one: The Wright Brothers taking the first flight.

Yeah. That happened. Other countries were cool just staying on the ground, but Wilbur and Orville Wright said: "Screw that. Let's take to the skies. America!" That's what they actually said. Seriously! Look it up. Don't look it up.

You may also remember it as the day everyone was literally weeping red, white, and blue tears. Team USA defeated Russia in ice hockey at the Olympics and, in doing so, basically ended the Cold War. Which is cooler than Jeb's engraved gun by a factor of several infinities.

America was founded to get away from the rule of monarchs. Despite that, one American woman continues to reign supreme. Beyonce isn't just a singer, songwriter, and actress. She's royalty. Long live the queen. Long live America.

You name it, we fry it. Fried chicken? Duh. Fried shrimp? Easy. How about fried Oreos, Twinkies, and literal sticks of butter? Only in America do we have the true grit to batter up a stick of butter, fry it, and call it food. Sure, it's disgusting. But you know what's more disgusting than deep-frying a stick of butter? Not having the right to do so in the first place.

Also known as "The Greatest Holiday in the World," Thanksgiving is the day where Americans get together and celebrate food and family while politely ignoring the holiday's genocidal origins and our implicit contribution to that embarrassing time in American history. It's simply the most American day there is.

The Ginsburger. Notorious RBG. Ruthy-Bades. Her record speaks for itself. Pro-gay-rights, pro-choice, and a pro at being awesome. In her 23 years as a Supreme Court justice, she has voted on the right side of history nearly every single time. She's one of the primary torchbearers of American progress, and she's doing it all without owning an engraved weapon. Although I do like to imagine that she owns a pair of "RBG"-inscribed nunchaku.

Two things happen when you visit the Grand Canyon. The first is that you're struck by its size and pristine majesty. The second is that you realize you've actually been saluting the entire time, while gently reciting the Pledge of Allegiance in your head.

12. All this beautiful corn.

Forget baseball. Corn is America's actual pastime. We grow it, we eat it, we put it in EVERYTHING. And we love it. American bodies are basically made out of corn. If the average American had a husk and a cob, we could go out to Nebraska, gently sway in the wind, and return to our truest form.

The Puppy Bowl. What can I even say about this? When the Founding Fathers got together and dreamed up the idea of a nation founded on freedom, liberty, and everything good and just in the world, they had no idea how seriously we would take it. The Puppy Bowl, a self-explanatory event that takes place annually at the same time as the Super Bowl, is the American dream incarnate. Sports. TV. Puppies. Don't even think about it. Just put on your American flag sweatpants, grab a medium-cooked burger, sit back, and enjoy.

That seems obvious to most of us. In fact, Jeb probably knows that, too, and only posted the tweet to pander to a conservative base. He doesn't actually think a picture of a gun is what America is really about.

But it's still hard to get around the fact that a picture of a gun represents something way more troubling than inspiring.

America is a big place with lots of problems. But sometimes, it helps to appreciate its triumphs.