Racists 'Zoom-bombed' Rep. Jahana Hayes' event but her response showed exactly how to defeat them 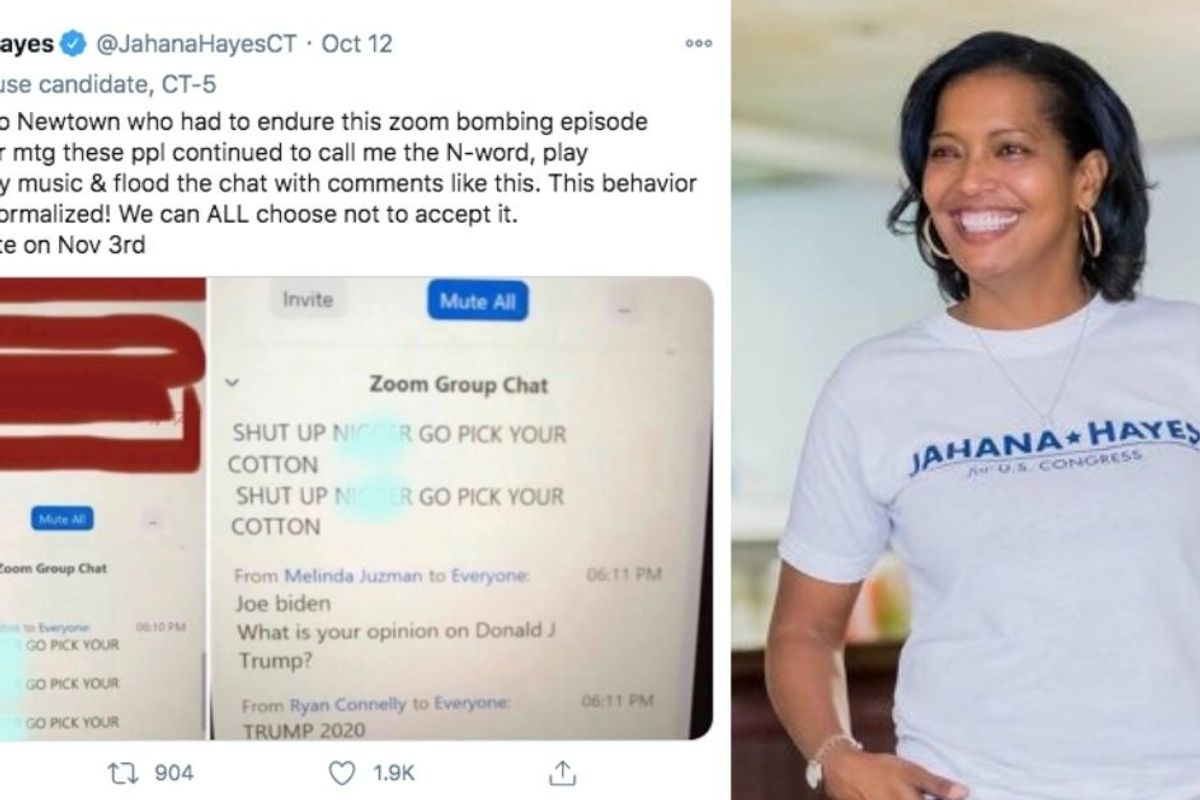 Jahana Hayes serves in Congress as the Representative of a district in northwest Connecticut. As part of her re-election campaign this year, she is hosting a series of virtual conversations throughout her district over Zoom so she can listen to the cares and concerns of the people she serves.

What she didn't expect to listen to in one of those conversations was six minutes of racist bile directed at her.

First it was a voice, about 10 minutes into the meeting, saying "Shut up, N-word." After Hayes' team blocked that person, another came in with a clip of a song using the n-word on repeat. Again, her team removed the offending party. Then two more chimed in—clearly a coordinated effort.

Hayes kept it together during the racist attacks, smiling and apologizing to the people in the call and waiting patiently while her team took care of the trolls. She had just a handful of minutes between calls to check in with her team members and prepare for the next conversation, and she did. But that didn't mean she was okay. In fact, she shared a post on Medium in which she made it clear that she was not okay.

"I am tired, completely and utterly tired," she wrote. "No, actually I'm exhausted. This is something that a leader is not supposed to say; but it's whatever."

After explaining what happened, she wrote, "To wrap up my evening, I call my staffer, who was moderating the event, to see if she is ok—I call the only other Black person on the zoom to check in on her and be sure she is ok—I call my Communications Director to instruct him to report the incident. I cannot even reflect on what just happened because I have to be sure my team is ok. I sign out of my computer, but not before I post a screenshot of a section of the zoom chat which read 'SHUT UP N-word GO PICK YOUR COTTON,' repeated in all caps over and over—fully appreciating the fact that cries of 'identity politics' are sure to commence."

So sorry to Newtown who had to endure this zoom bombing episode During our mtg these ppl continued to call me the N… https://t.co/QsbduZGxxV
— Jahana Hayes (@Jahana Hayes)1602543410.0

She went on to explain how all of this feels:

Black women are expected to press on, to ignore this behavior; to not talk explicitly about it because it is uncomfortable, divisive or does not reflect the sentiments of most people. I have watched other women weather this storm and fend off these types of attacks and wonder if in their quiet places they have felt what I am feeling right now. We have become numb to this behavior, instinct kicks in and we just move on. So many well intentioned people say things like, ignore it, you're better than that or don't let it bother you. Even as I write, I am exhausted by the fact that I am carefully choosing my words, as to capture the experience, but not offend the reader. We are left debating zoom security, yet not addressing the underlying issue—that pockets of racism and hate still exist right in our own front yard. The most painful part of it all is that no matter what you achieve in life, no matter how many degrees you earn or how good of a person you try to be—all some people will ever allow themselves to see is a N-word.

Has anyone ever considered the trauma of such an experience? Words matter and they cut deep, no matter how hard you try to suppress or ignore them—words hurt. In that moment I was reminded that I carry the weight of leading by example and knowing that everyone was watching my next step. As the first African American woman ever elected to Congress from CT, I know there is likely no blueprint for how to communicate my feelings on this topic to my constituents. I heard the words of Michelle Obama 'when they go low we go high' play over and over in my head. I imagined if my Grandma were here she would shake her head and immediately start to pray as she recalled some of the most painful parts of her own history. I thought of the 17 year old who is met with the same racist, vitriol attacks and has to make the life defining decision of how they will respond. So NO—I am not ok.

It does not mean that I am broken, or that I will give up. It does not mean that I do not love my country or recognize that one person does not speak for the majority. It means that, tonight I will practice some self care. I will read a book, take a bath and maybe have a good cry and tomorrow I will steady myself and get back to work."

There are people in this country who think that successful Black Americans don't experience racism, as if achievement in their careers or a certain level of economic comfort somehow hides the color of their skin. There are people in this country who brush off blatant racist incidents as an outlier—a rare occurrence that should just be ignored and that will just miraculously go away on its own.

But as Hayes points out, that's not the way this works.

"Check in on your Black friends, I can assure you that there are many who are not ok in this current climate. Stop saying that this doesn't happen here or dismissing it as anecdotal. Have an honest conversation about what we are all experiencing. Listen, don't project, don't make judgements, just listen. While understanding my pain may be a journey for some, a refusal to acknowledge it is a non starter for anyone who seeks to heal our nation. The only way we can cut the cancer of racism out of our communities is by calling it out when we see it and raising our collective voices to get rid of it. In the words of Edmund Burke, 'the only thing necessary for the triumph of evil, is for good people to do nothing.' Let's all commit to doing something and being ok together."

Yes, let's all commit to doing something to destroy this cancer once and for all.