It takes a strong person to be a Marine. Meet Jamie DePaola. 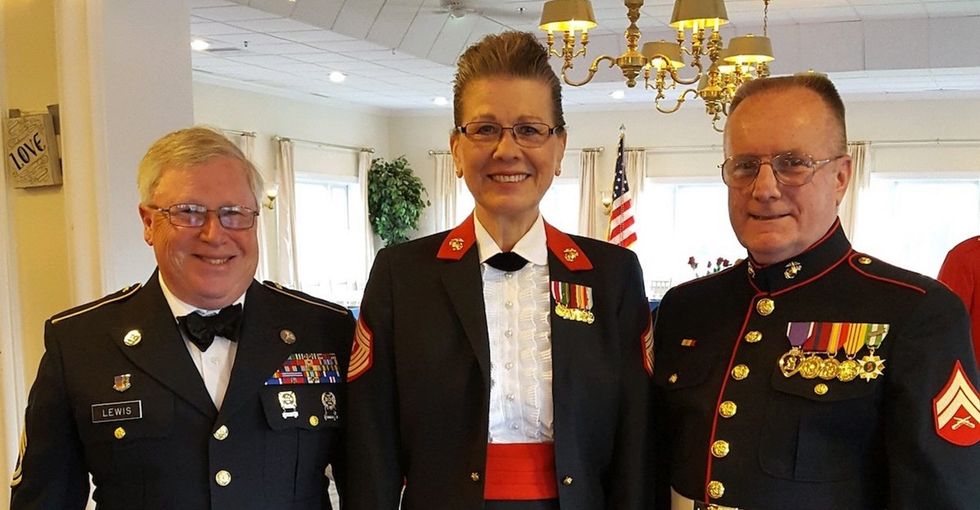 Being a Marine is one of the toughest jobs in the U.S. military.

Jamie DePaola was just 19 years old when she knew she wanted to be one.

Growing up in a small town in Ohio at the close of the Vietnam War, DePaola knew a lot of young men who ended up in the military. Bored and looking for a challenge, she thought about joining them.

“I found out by accident that there were women in the Marine Corps, and at the time, I was most concerned with finding out what the female officers were called,” she says. “I learned that in the Navy, females were called WAVES. In the Army, they were called WACs. But, in the Marines, women are called Marines.”

DePaola was sold. Two weeks later, she enlisted. One week after that, she told her parents.

“My father was a former Navy man and he worried about me. He asked why I’d want to enlist, and I told him that he’d raised us to be patriotic and I wanted to serve my country,” she says. “Then he asked why I didn’t want to join the Air Force instead.”

Despite her father’s hesitation, DePaola’s heart was set on becoming a Marine. “I was 19 years old. I could enlist in the military and I could vote,” she said. “I was an adult, and no one could tell me what I could or could not do.”

While the Marines Corps has taken great steps in recent years to eliminate gender-based differences, that wasn’t the case in the mid-1970s.

During boot camp, DePaola and her fellow female Marines were segregated from their male counterparts. Everything was different: their training programs, the jobs they could do later, even their uniforms set them apart. That’s not to say that women Marines were not held to exceptional standards; they absolutely were (and still are), particularly when it comes to physical fitness.

According to DePaola, “When I was active and training, the physical fitness standards for a female Marine were the same as for a male member of the Army.”

When DePaola chose to leave the Marines to get married and start her family — at the time, enlisted Marines weren't allowed to get pregnant — she assumed her career in the service was over.

But, a few months later, she received a surprising phone call. It was an officer with the Marine Forces Reserve, asking if she’d be willing to re-enlist. “He told me it was one weekend a month, and that there’d be options to reduce my responsibilities when I was pregnant,” she recounted. “Basically, he talked me into it.”

Being a Marine comes with knowing there’s always a chance you’ll be called to serve in combat. For DePaola, that was Desert Storm.

DePaola and her battalion, the 25th Marines, after Operation Desert Storm.

In August 1990, Iraq invaded Kuwait. The U.S. military, along with NATO soldiers, immediately deployed to the Persian Gulf. DePaola’s battalion, the 25th Marines, was deployed in February 1991. Their first task was to participate in a month-long NATO cold-weather training exercise in northern Norway. DePaola was the only female Marine among several thousand men. She carried her own 80-pound pack and slept in snow caves or 10-person tents with her fellow Marines. “I had one shower in 30 days and just a few bales of hay for privacy,” she shares with a laugh. “We just made it work.”

DePaola’s battalion never saw combat in Iraq. While they were in Norway, the three-day ground war in the Gulf began and ended.

Seven months later, she returned home and discovered that everyone had changed. Including her.

“When I came home I was told to my face by my friends that I was a horrible mother because I left my children alone with my husband. They said I’d abandoned them,” DePaola reveals.

“I knew that wasn’t true, so I called on the inner strength I’d grown as a Marine, and I focused on my kids and my husband as we found a new normal. I learned that it wasn’t that my family didn’t need me anymore, but that they needed me in different ways.”

Recognizing that civilians will never understand what happens to military personnel when they deploy is why DePaola stays active in the Marine veteran community. As the Area 1 director of the Marine Women’s Association, she’s focused on connecting former and current Marines with each other.

“I think a lot about the women today that come home from combat with experiences I didn’t have. They come home and they’re different, and they’re not able to communicate how they’re different or why. That’s why it’s so important to have a network of sisters that support one another in a way that no one else can understand.”

Over her career, DePaola has held many titles: sergeant major, mom, grandmother. She embraced each one with style and grace.

“If I look at my life in rearview, there’s nothing I would have done differently. I balanced my life with being in the Marine Corps, being a mom, and being a wife, and all of those things made me better at the other. When I think about stuff I can’t do, I remind myself I’m a Marine and I do it,” she says.