What should you do if a random girl suddenly approaches and acts like she knows you? Play along. 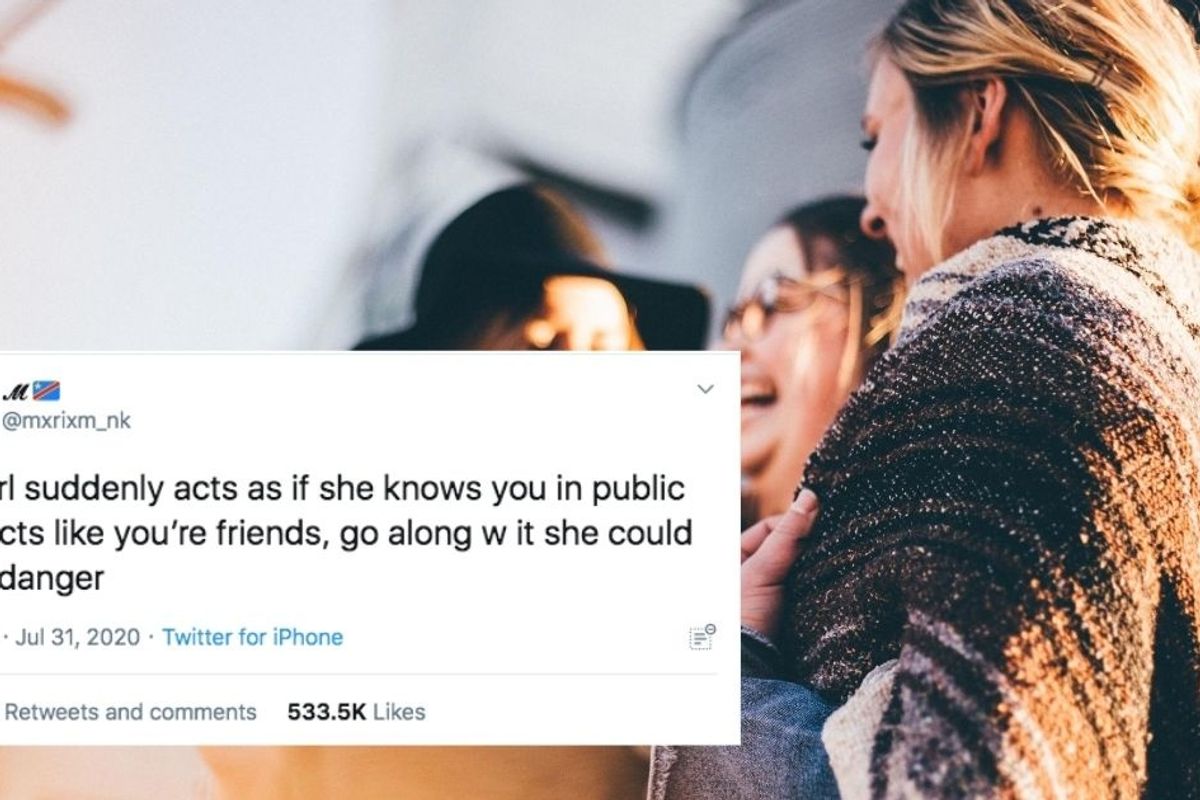 Most women, at one point or another, have felt some wariness or fear over a strange man in public. Sometimes it's overt, sometimes it's subtle, but when your instincts tell you something isn't right and you're potentially in danger, you listen.

It's an unfortunate reality, but reality nonetheless.

A Twitter thread starting with some advice on helping women out is highlighting how real this is for many of us. User @mxrixm_nk wrote: "If a girl suddenly acts as if she knows you in public and acts like you're friends, go along w[ith] it. She could be in danger."

Other women chimed in with their own personal stories of either being the girl approaching a stranger or being the stranger approached by a girl to fend off a situation with a creepy dude.

One wrote, "A girl did this FOR me one time when I was sitting alone at a bar because she could tell I was in a very uncomfortable situation and I'll never forget her. It was bold of her to do that for a stranger but she literally saved me from some creep ass guy."

Another added, "I had a waitress do this for me once when an ex was yelling at me. She didn't leave me out of her sight and when he went to the bathroom she asked if I was ok and if I had roommates or if I was going to be alone with him after. An actual angel."

Another shared how a woman joined her and her husband as if they were old friends until her friends arrived.

"A woman walked up to my husband and I saying 'I haven't seen you guys in so long!!' then hugged us. We were ???, but went w/ it. She then pointed out a group of guys that followed her in, and the one that wouldn't leave her alone. He kept getting drinks right near us. Which was odd because we were in the corner out of the way. She hung out w/ us until her other friends got there. Once we realized what had actually happened we were a little shocked."

User "AmberLUVV" shared a story of being in a Dominican Republic port on a cruise when two girls pretended to belong to her family.

"When I went on a cruise with the fam, we ported in DR for a day. My dad and I decided to go the local shopping market. We had took a break on a bench cuz it was HOT! But all of sudden two girls walk up to us and addressed my dad as their own, and proceeded to say that they had And scared! We played it out for a minute longer until they told us what happened! Some men in a van were following them promising to take them to the beach and wouldn't leave them alone! They pointed out one of the guys and I had seen him turn away when they addressed my dad!"

"Raeloe" shared how a girl approached her at a nightclub to get away from a creepy guy when she'd been separated from her friends.

"I had this happen in a nightclub once. My hubby and I were working PAX and this club let's [sic] the enforcers in for free with their badges, I've never been before so he said c'mon let's go. Bout 2 hours in this girl comes up and dances with me and asks if it's okay to stay awhile. She lost her friends and this dude was creeping on her. I told her to take all the time she needs to find her friends. She came back with them later and gave me a big hug for making her feel safe. Would do it again without hesitation."

Another person shared how they'd been the one who needed help.

"Been the person who needed this. Creepy dude wouldn't leave me tf alone, so I walked over to a group of girls and acted very excited to see them again. They immediately caught on and we started talking about whatever. For over an hour. Bcuz he wouldn't leave. They ended up giving me a ride around town bcuz the creeper was following. Made some friends and we made him run a red light, which had a cop chasing him. They got me home and we hung out regularly after that."

And another explained how grateful she was to a woman on the bus who let her act like they were best friends.

@SacredNewBegini @mxrixm_nk This happened to me at a bar and this woman and I are still friends TO THIS DAY!
— Comrade_cerveza (@Comrade_cerveza)1596358159.0

One person even shared a video showing exactly what such a scenario looks like in real life.

Some people responded with various "what if" scenarios, like what if a woman is really trying to lure them into a dangerous situation, or what if they want them to accompany them somewhere that might not be safe? But those questions seemed to miss the point that no one was suggesting anyone go anywhere private with anyone, and also seemed to miss how often women actually do find themselves in situations where they need to turn to a stranger for help.

As one woman wrote, "All the people fighting this saying it'll be a setup are underestimating how often women actually do this to get away from creepy men. I've had to do this at a bar and I've also gone up to a women I saw distressed and pretended to be her friend and she played along. It happens.

I've yelled back. I've thrown drinks in guys faces. I've pushed them away from myself and others. I've reached out for help and asked other guys or security to step in. Sometimes the path of least resistance for a good night is to blend in real quick."

And others pointed out that women don't generally approach men for help unless they feel like they really need to—usually because they end up in situations where men don't respond to the word "no."

Finally, someone suggested a tip for using your phone to ask a girl if she's in danger while pretending to show her a picture, so you both can be clear on what's really happening.

But the bottom line is, if a girl or woman walks up to you and pretends to know you, more often than not it's because she's trying to get away from someone. Play along and accompany her until she's safe. Guaranteed she'll be eternally grateful.

From Your Site Articles
Related Articles Around the Web
women
popular