I spent my life trying to defy race and gender stereotypes. Here's why I stopped. 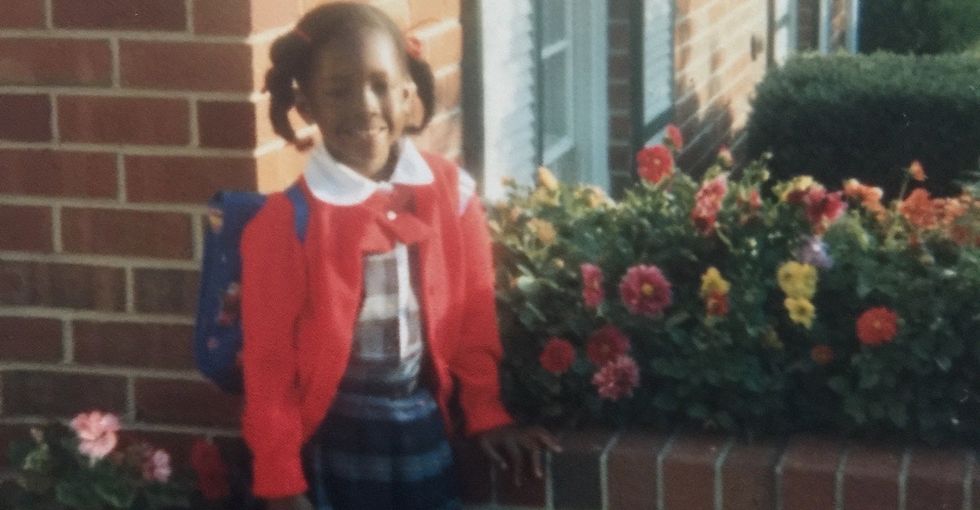 I remember how shocked my third-grade teacher was that I knew the word "hyperbole."

The day I used it perfectly in a sentence, her eyebrows raised so high I thought they would leap fully off her forehead into her frozen blonde bob. "Where in the world did you learn such an advanced word?" she asked. She looked at me strangely for the rest of the day.

Sure, it was a big word for an 8-year-old. But what she didn't know is that my father taught it to me that morning and told me to use it in a sentence in class just to see her reaction.

The middle-aged white woman had been not-so-kind to me, one of only two black children in the class, all year long — seating me in the back, not letting me read out loud to the class, never ever letting me answer the hard questions despite my hand always being first in the air.

Unbeknownst to me, my parents had already filed a complaint and could only assume that despite the fact that I was a well-behaved and academically advanced child, her assumptions about my race led her to have very low expectations for me.

When I got in my father's car that afternoon, he asked if I had done as he instructed. I told him yes and described her incredulous reaction in detail.

And then he smiled. He was proud of me, and while I didn't understand why, I knew right then and there that somehow, by showing her that I was smarter — different than she previously assumed — I had done something good.

That was the day I became a Stereotype Defier.

You see, we Stereotype Defiers are everywhere. In fact, you yourself may be one. We move through our lives making choices (sometimes even subconsciously) about what we will do, say, be, or enjoy in order to confound others' expectations of us.

Sometimes the choices seem harmless: “Um, no. I don't want to be the woman with a pink glitter phone case in a business meeting full of men. I'll take the gray one please."

Sometimes those choices push us to do better and showcase our talents: “Oh, you think because I have a disability, I'm not smart? Well watch me ace this test and show off with the extra credit a bit."

But other times the choices are a bit more pernicious:

Like if you were the Asian kid who really, secretly did love math but pursued English in college because you just couldn't be that guy.

Or if you're a woman suffering a hurting, broken heart but buried your pain deep inside because you refused to be seen as sensitive or weak.

Or if you've ever offered to pay for people at a group dinner knowing that you barely had enough money to get by for the week because God forbid they know you're poor.

Or if you're a single mom but you volunteered for a senior position in the PTA that you know you don't have time for, but no one expects the single mom to be that involved so you overcompensate.

Or if you worked hard to get rid of your Southern accent because you know what people think about people who are "country."

No matter the scenario, we Stereotype Defiers try to convince ourselves that the negative stereotype we face is actually a motivator pushing us to be great — even as we narrowly define greatness as “the opposite of whatever they think."

Living your one wild and precious life within the confines of another person's limited opinion limits your freedom, your brilliance, and your joy.

We tell ourselves that we make these choices not just for ourselves, but for others. We worry (often nobly) about how those who come behind us will be perceived as a result of our actions today.

But the irony in that reasoning is perfectly explained by something that researchers call “stereotype threat." When people worry that their performance might be seen as confirmation of a negative stereotype about a group they belong to (race, gender, socioeconomic, or otherwise), that stress and self-doubt can end up significantly reducing their performance — ultimately creating the very outcome they were trying to avoid by defying the stereotype in the first place.

In other words, worrying about the opinions of others and how they might reflect on us causes us to do and be less than who we really are.

Still, we tell ourselves that we enjoy the thrill of the raised eyebrows, of proving “them" wrong.

But often, hiding behind the short-lived thrill of defying a stereotype lies the very dangerous fear of fulfilling the stereotype. And fear is the ultimate killing machine — RIP dreams, RIP authenticity, and, many times, RIP good old-fashioned fun.

So what is this thing that we've given so much power over us?

The word stereotype originates from the 18th century world of printing — it was a tool for the printing press that allowed printers to more easily reproduce text instead of having to place letters in order one by one; It was a single metal plate made from a mold of the original letters. In non-technical terms, a stereotype was a printing tool that made it easier to copy something because the work of actually reproducing the original was too painstaking, too hard.

A stereotype mold being made. Photo via Wikimedia Commons.

Now think about that in the context of modern stereotypes. A stereotype as we know it today is a collection of traits that we associate with specific groups of people that makes it easier for someone to categorize an individual person. Too often, this happens because the work of fully knowing the unique, complex individual person is too painstaking, too hard.

And when you follow that logic, why would we ever consciously make any choices guided not by our own instincts, desires, or intentions, but by our desire to reject a misconception that someone else created as a shortcut to accommodate their limited capacity to know us?

We deserve so much more.

In her famous TED Talk “The Danger of a Single Story," writer Chimamanda Ngozi Adichie says that stereotypes are not always inaccurate. They are just incomplete. Yet somehow, we have been tricked into thinking that we can never be what others presume about us, which, ultimately, robs us of our humanity.

Junot Díaz, another writer, calls stereotypes a sensual cultural weapon. But guess what? The only way we let the weapon harm us is by allowing its very existence to become an internal GPS, guiding us to go left, go right, slow down, take this route or that one when in fact the stereotype has no idea what your true destination is supposed to be.

Here is what I learned during my years of Stereotype Defier rehab: The most powerful challenge any of us who are routinely and unfairly stereotyped can give to the incomplete picture that exists in the world — and to the people who apply those stereotypes to us — does not come from breaking the mold and proving them wrong. It comes from our agency, our choices, and our wholeness.

Let me say it another way.

Even if that means embracing behaviors that others deem stereotypical.

Living your one wild and precious life within the confines of another person's limited opinion limits your freedom, your brilliance, and your joy. And that burden is far too heavy to carry. So why not just put it down?

Go ahead and cry.

Bring fried chicken and watermelon to the office party.

Have another baby and stay at home to raise her.

Go back for seconds and fill up that plate in a room full of skinny people.

Laugh loudly on the subway.

Shop at the thrift store.

Stick that WWJD bumper sticker on your car.

Retire your title of Stereotype Defier. And as much as you can, just be your authentically angry, emotional, country, flamboyant, occasionally late, beautiful self.

The original print of you is so much better than a stereotyped copy ever could be.