I looked into the backstory of male birth control. Turns out, it's a racist, sexist mess. 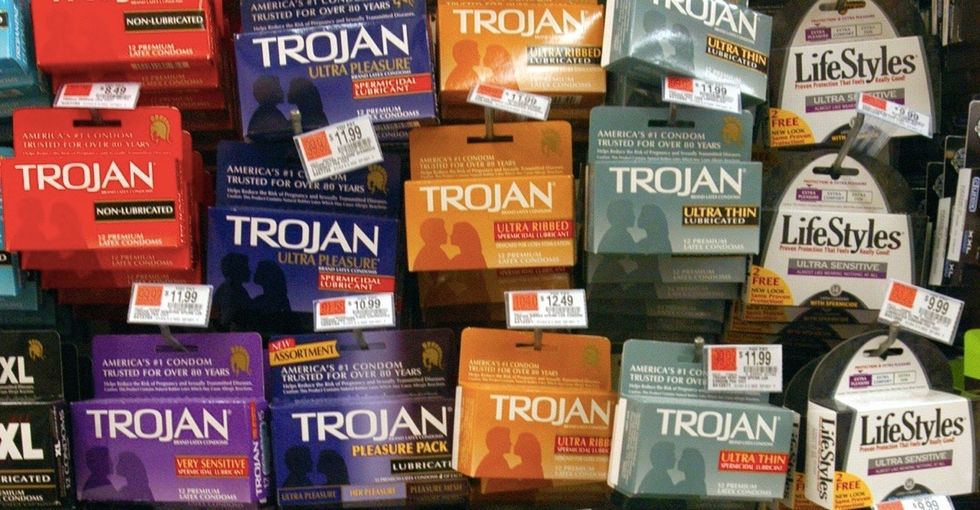 There once was a study about male birth control that made everyone freak out.

You know the study I'm talking about, right? The one where a handful of dudes took male birth control, and they got all sad and bloaty, and then most of them quit the whole thing altogether. The one that recently spawned dozens of articles making fun of those dudes' fragile masculinity.

In the study, which ran from 2008 to 2011, 266 monogamously committed guys in 10 different countries tried out a sperm-suppressing injection that looked to be 98% effective. In the end, 7.5% of the guys who took the male birth control dropped out for maybe experiencing side effects similar to women who take birth control. The study was also really tragic because it might have permanently sterilized a guy, and some of the subjects attempted or died from self-harm.

As a dude who would happily take birth control, I have some thoughts about this study and our response to it. Because there's a lot more going on here than it sounds like, and we need to talk about, well, all of it.

First, just to get this out of the way, this study was total crap.

Dr. Jen Gunter, an OB-GYN and, yes, a woman, runs through the study in detail on her blog, and suffice to say: The parameters behind it were a bust. It just wasn’t worth continuing.

The sample size was a mess: There were 320 guys at the start of the study, but that number dropped to 266 before the depression-bloaty-acne issues (plus 1,500 other side effects) came up. By the time it ended in 2011, the study was down to 111 subjects.

They also didn't control for consistency across the different testing locations. They hadn't screened participants for mental health or in any way that would allow them to measure their emotionality. So when they realized, for example, that most of the adverse side effects were coming out of Indonesia, they had no idea if that was cultural, dietary, or tied to the meds.

On top of that, the Food and Drug Administration requires 20,000 menstrual cycles' worth of safety data for women. But since men don't cycle, no one has determined how long men's birth control would need to be tested to be deemed safe.

Coupled with the difficulty of establishing placebo controls for contraceptives (giving someone a sugar pill and telling them it's fine to have unprotected sex is generally frowned upon), the potential rewards of this particular study were really, really unreliable.

Well, guess we're back to the ol' go-to! Photo by William B. Plowman/Getty Images.

The anger behind the findings of this study is totally valid, though, because of the shoddy history behind women’s birth control.

It turns out, birth control studies have almost always been deplorable and rooted in a very deep history of gendered medicine and racist abuse.

The short version of the story: Puerto Rican women and asylum inmates were forced to participate in early trials for female birth control pills in 1955. In fact, in Puerto Rico, where contraception and abortion were legal and available but forced sterilization was also occurring, the researchers specifically sought out the "ovulating intelligent" in medical school, where the trials became a required part of their curriculum. If they dropped out or refused to participate, they'd be expelled from school.

Later, when the drug was tested under slightly more humane circumstances, there were still some big problems: The researchers enticed women with the "no pregnancy" part while conveniently leaving out the details about the potential side effects of the pills. If the recent male trial that got everyone up in arms was bad by modern standards (which it was), then these adverse effects were monstrous: 17% of participants had serious complaints, three people may or may not have died as a result, and one of the researchers even straight up admitted that there were "too many side reactions to be generally acceptable."

But they stuck with it anyway, using a dosage that was 10 times higher than necessary for contraception, and got the thing approved.

The progress and development of the pill over the last 50 years was only possible because women fought to make it better once it was out in the world, despite its nightmarish origin story.

So yes, you are absolutely right to be outraged when it comes to this study: Women have carried the brunt of birth control side effects for way too long. While this one recent male study was crap, so were many that came before it that were much worse for women.

Apparently scientists did briefly consider making a birth control pill for men just before the Puerto Rican trials, by the way, but they figured dudes couldn't handle the mild shrinkage and that women were better suited to silently suffer through the side effects because of their higher pain tolerance.

That's just further proof that women have been putting up with this kind of shit for long enough, and we shouldn't have waited so long to start developing a male birth control pill. (Of course, if we had started earlier, who knows how many more blatant human rights violations would have occurred? Grr.)

The good news is that a majority of men are totally on board with using a pill to keep our swimmers on the sidelines.

We don't even mind the side effects! Really! In fact, 75% of the participants in this particular study and their respective partners said they were down to keep doing it.

In another study of 9,000 men in nine different countries, 57% were open to popping a (theoretical) pill. For comparison, about 17.5% of women ages 15-44 in the U.S. use oral contraceptives. So the odds there aren't bad. Lots of us guys are down with this — I promise.

There are lots of other people working on alternative forms of male birth control, too.

Gandarusa is an Indonesian herb that produces an enzyme that basically prevents individual sperm from making it all the way to egg. It apparently originated as a stress reliever with temporary infertility as a possible side effect.

The "clean sheets pill" does exactly what it sounds like: It stops you from actually spillin' yer stuff but still keeps the sensation of an orgasm otherwise intact.

There's also Vasalgel, which is not a pill, per se, but a gel injection into the vas deferens to keep the sperm out of your semen. A similar process involves injecting gold nanorods into your testicles, which, um, probably makes for an interesting pickup line, at the very least. Ahem.

BE A HERO LIKE THIS GUY. Photo via iStock.

Sex, contraception, and pregnancy are all shared responsibilities. They are consensual.

So, dudes, let’s get moving. You want to help push an actual male birth control pill through? Talk to your doctor. Sign up for a study. Talk about it, yell it from the rooftops, maybe try screaming it in bed if that's your thing. (Hey, you never know until you try.)

A lot of guys already know this, but if you don't, here it is: We all need to do a better job for working toward more equitable solutions, and not just for birth control. So let's make that clear to the women in our lives, and let’s move along from this crap study and design some better ones. It’s time to get shit done.