How far would you go to make sure your child felt included? This mom got creative.

What a single mom's viral dad disguise can teach us about accepting all families. 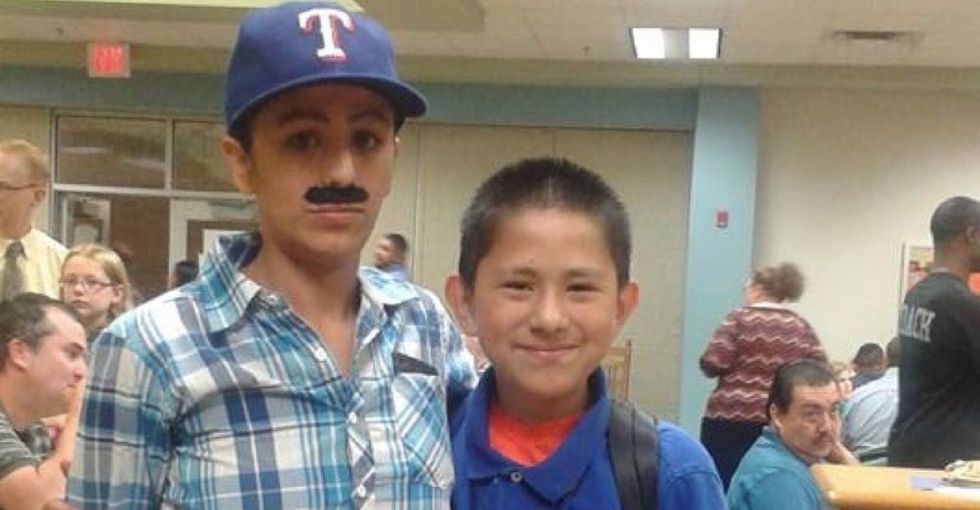 When 12-year-old Elijah helped his mom, Yevette, put on a fake mustache, a plaid shirt, and a dash of cologne, he had no idea what was going on.

Yevette Vasquez is a single mother. Since Elijah was born, she's raised him alone.

So when Yevette found out there was a Donuts With Dad event at her son's school Sept. 1 in Fort Worth, Texas — an event her son thought he couldn't attend — she got creative.

Good morning, today at my son Elijah's skewl as I was dropping him off i ask him why there was so many cars... He said...

Good morning, today at my son Elijah's skewl as I was dropping him off i ask him why there was so many cars... He said Donuts 🍩 with Dad, so we quickly went back home cause I wasn't about to let him miss out..... I know seeing other dads with there kids isn't easy for mine but its life, at least I can do whatever it takes to put a smile on that face, so here it goes..... and please don't hate I know I'm a woman an so do my sons lol #ilovehim#wegettingthemdonuts#noexcuses

Yevette showed up at Donuts With Dad looking hilarious in her "dad" costume.

She said most of the parents' reactions to her get-up were really cool, although she admits to sensing a little negative energy from a few dads who might have felt uncomfortable with her obvious disguise.

And while her costume was funny, it also reveals an important thing about inclusive school events.

Yevette takes a selfie of herself dressed as a dad. Image by Yevette Vasquez/Facebook, used with permission.

Sure she could have just gone as herself — a mom — and still have proven a point by setting an example. But by dressing up as a dad, she drew attention to a major issue.

Vasquez grew up without a father, so she knows the feeling of not having a dad in your life well. In fact, her situation is pretty common these days: U.S. Census data shows there were 9.9 million single mothers in 2014. That number marks a steep 3.4 million increase from 45 years ago.

Her Donuts With Dads story is also part of a larger issue, though: There are many types of families who don't necessarily consist of the "traditional" nuclear setup of mom, dad, two-point-five kids, and a pet.

Actually, less than half of kids in the U.S. live in a home with two married parents.

So events like Donuts With Dads can inadvertently feel like exclusion to students, like Elijah, who aren't raised in what many consider a traditional family headed by mother and father figures.

Yevette put herself out there so her son wouldn't feel excluded, and it was a beautiful act.

She says Elijah was happy and excited to go back to school after the Labor Day weekend to see the reactions of his mom's story going viral.

"I know I can't replace a man in his life, but I can turn a negative moment into a positive one," she said. "And at that moment, he is all that mattered."