What happens when vision loss changes the way we enjoy our favorite sport? 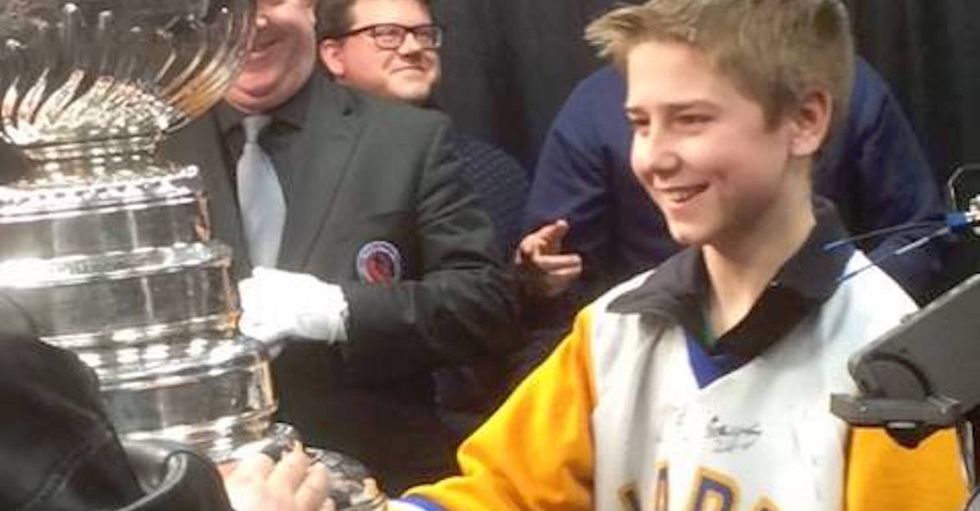 As any sports fan knows, love of the game can run pretty deep.

There are player names to memorize, stats to learn, jerseys to collect, and of course, games to watch. For many families, loving a sport or a team brings them together. Parents and kids pile onto the couch or into the arena to watch games as a group.

Gerry Nelson has always enjoyed watching hockey. But things got a little trickier when blindness made it so he couldn't watch the game he loves.

Gerry wasn't always blind. But after years of ignoring his childhood diagnosis of Type 1 diabetes, he lost his sight at age 25. "I lost my parents when I was very young, and I didn’t look after myself in my late-teens and 20s," Gerry said. "I didn't get the education I needed around how important health is when you're diabetic. But now I’ve turned it all around."

Losing his sight hasn't kept Gerry from living a full life. He's become an accomplished golfer. He also is an active father to his son, Wyatt, who is now 12 years old. "In reality," Gerry said, "he's more 12 going on 30."

When Wyatt was 5 years old, they started attending hockey games together, mostly the local WHL team the Saskatoon Blades. Wyatt would watch the action on the ice, and Gerry would follow along listening to the live play-by-play broadcast on a local radio station.

Their system worked perfectly — until the night they attended a preseason game the radio station wasn't covering. Gerry was happy to sit in the arena alongside his son, but Wyatt wanted to give him a better experience. So, he started narrating the action on the ice, emulating the play-by-play announcers hockey fans know so well. Through Wyatt's words, Gerry was able to see the action as well as he could have with sight.

From that night onward, Gerry hasn't needed his radio when he and Wyatt go to games together. Wyatt's play-by-play is enough.

“Sometimes when he is doing something with me I feel like I am taking him away from his time with his friends,” Gerry told an interviewer late last year. “But he says, ‘No, Dad, I love doing it and I want to do it.’”

Gerry and Wyatt's story started making waves in Canadian media last December. As it turned out, some folks in the NHL were following along.

Over the last year, they've had some incredible experiences thanks to hockey fans who've been inspired by their story. They've attended a Stanley Cup final game, gone to the NHL Player Awards in Las Vegas and met some of their heroes on and off the ice.

Wyatt even did play-by-play announcing for Game 2 of the Stanley Cup finals on a local radio station in St Louis. "He did 17 minutes of the first 20-minute period," Gerry said proudly. "The more and more he does, the better he gets at it."

By far the most emotional moment for the two came last spring when a news crew visiting Saskatoon brought a special surprise to the local arena for the Nelson boys.

Hidden in a distant room at the rink was hockey's greatest trophy: the Stanley Cup. It's a huge piece of hardware, standing nearly three-feet-high and weighing 34.5 pounds. For fans, it's especially magnificent.

Wyatt Nelson-Zook with the Stanley Cup. Image by Gerry Nelson, used with permission.

Gerry and Wyatt got to experience the cup in a way few people do — just the two of them.

"Growing up on the streets of North Battleford, our Stanley Cup was an aluminum garbage can," said Gerry. "All of a sudden, I was realizing that it was my son and I, alone — no one else in the room with the Stanley Cup. It was one of the most amazing feelings. I was able to put my hands on it, without 200 other people in the room at the same time. That’s when it really started to hit home and got pretty emotional for me."

All of these incredible moments, shared with the sport they love, haven't changed Gerry or Wyatt one bit.

When the big moments are over and the Stanley Cup has been put back in its case, Gerry and Wyatt Nelson still have their remarkable connection — and the game that brought it to light.

"The perfect thing is the quality and type of relationship that Wyatt and I have," said Nelson. "It wouldn’t matter if it was a peewee game on the local outdoor rinks or the Saskatoon Blades or an NHL game in the big city. Nothing could make it better because I’m already spending this wonderful time hanging out with Wyatt, sharing our love of hockey. For him and me, the blindness doesn’t figure into it. Wyatt does what he does because Dad’s Dad and Dad can’t see."

As for all the kudos Wyatt has received for his play-by-play announcing skills, Gerry says he'll leave it up to his son to decide if that's something he wants to do. "So far Wyatt's [wanted to be] a baseball player and a hockey player and a firefighter. I know for me it took a lot of trying to figure out what I wanted to do with my life, and he's got a lot of time to figure things out," said Nelson. "I’ll support Wyatt in anything and everything he wants to do. If he opted to go that route, I would support him. After all, I'd get to go to a lot more NHL games!"