Haven't heard about South Africa's gripping protests? 11 quick points will get you up to speed. 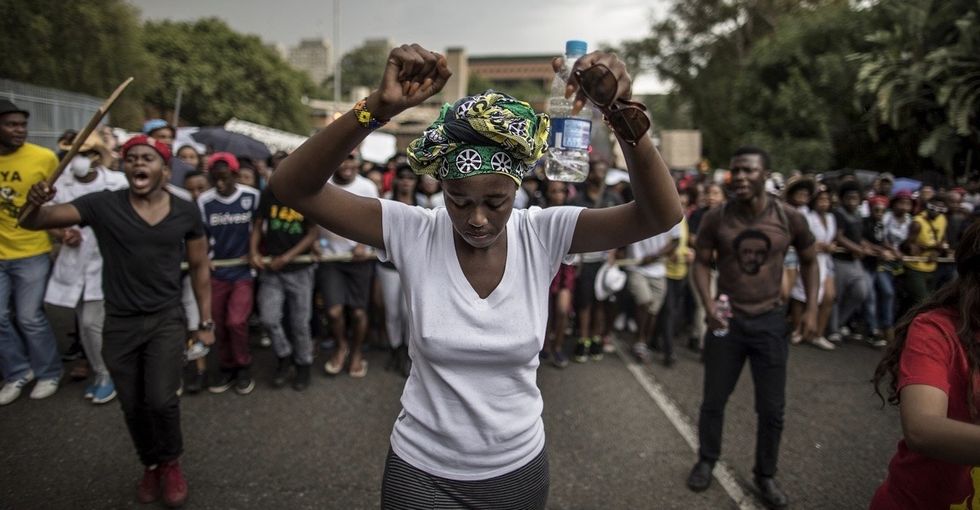 An amazing thing happened in South Africa this month when the government tried to raise university tuition.

Students fought back. And they won.

A demonstration against fee hikes in Johannesburg on Oct. 22, 2015. Photo by Gianluigi Guercia/AFP/Getty Images.

Over the past few weeks, thousands of students flooded the streets, voicing their frustration with a proposed hike in tuition fees. The movement gained steam when the hashtag #FeesMustFall started trending on Twitter. Next stop: some serious international attention for their cause.

The student movement became so vocal and widespread that on Oct. 23, 2015, South African President Jacob Zuma agreed to freeze tuition increases at public universities for the next year.

That's right: They fought, and they won. For all of you students in the U.S. (or anywhere in the world) facing a mountain of student-loan debt, this is a pretty inspiring moment.

The protests are about way more than just college costs, though, and we'll get to that in a minute.

Here are the 11 things you need to know about the movement (and why it isn't over yet):

1. It all started at Johannesburg's University of the Witwatersrand (known as "Wits") after a proposed a tuition hike.

Students were outraged when the government proposed a 10.5% fee increase.

A young woman marches through the Wits campus on Oct. 21. Photo by Marco Longari/AFP/Getty Images.

2. Protesters were particularly upset because they felt the higher costs would disproportionately affect black students.

South Africa may have overcome apartheid in 1994, but that didn't lead to economic equality between races. According to South Africa's 2011 census, the average annual income for black households amounted to roughly $8,700, which was about one-sixth of what white households earned.

The New York Times reports that tuition at Wits ranged from $2,400 to $3,500 in 2015. And some other public universities in South Africa are more expensive.

Protesters on the Wits campus. Photo by Marco Longari/AFP/Getty Images.

3. There was a serious ripple effect, with classes at several universities canceled due to demonstrations.

The cancellations were especially disruptive because exams were set to begin in the coming weeks. Some universities remained closed at the start of the week.

On Oct. 21, police fired tear gas at students who stormed the gates of the country's parliament in Cape Town. During a rally two days later outside government offices in Pretoria — the country's de facto capital — a small group of demonstrators threw rocks at police, and authorities responded with stun guns and water cannons.

Most recently, police fired stun grenades and arrested a student during a protest at Wits on Oct. 28.

Students from the University of Cape Town clash with police after they forced their way into the South African parliament on Oct. 21. Photo by Rodger Bosch/AFP/Getty Images.

5. Three women are leaders in the protest movement — and are winning admiration.

The incoming student council president at Wits, Nompendulo Mkhatshwa, has been a leading voice of the movement.

"The youth have been saying that a revolution is coming, and indeed we are at the door of it if not in it already," she told Destiny Man, a South African men's magazine.

A series of three mini-profiles in South Africa's City Press highlights the work of Mkhatshwa alongside two other leaders: Shaeera Kalla, the outgoing student council president at Wits, and Jodi Williams, a political science student at Stellenbosch University.

“In social justice movements, most of the time leadership positions are hijacked by men," she told City Press. "We are turning the tables."

6. This is about more than just tuition.

In March, students at the University of Cape Town defaced a statue of British colonialist Cecil John Rhodes and went on to protest until it was removed from campus. The goal? Student activists feel it's time to "decolonize" education throughout the country, and the current demonstrations are a part of that movement.

The statue is removed on April 9. Photo by Rodger Bosch/AFP/Getty Images.

Students called the Oct. 23 march on Pretoria "historic." And with more than 10,000 demonstrators attending, they might just be right.

Writing for CNN, Wits graduate Basani Baloyi and researcher Gilad Isaacs compared the action to an apartheid-era youth uprising in Soweto, a black urban enclave in Johannesburg, where students fought a landmark battle for educational rights.

"Not since the Soweto Uprising of 1976 have this many youth arisen to demand the right to quality and accessible education."

8. The economic divide is a big part of the problem.

University fee increases are nothing new in South Africa; BBC reports that annual tuition hikes in South Africa range between 7% and 14%. But broader economic factors could be playing a part in students getting tired of those ongoing increases.

Since the fall of apartheid, the incomes of whites and Asians have grown significantly while black incomes have been "nearly flat," according to Pew Research Center.

9. The protests could provide a boost to opposition political parties.

Since the end of apartheid, the African National Congress has pretty much run the show when it comes to South African politics. Now, opposition groups are hoping to capitalize on the frustrations of protesters and make headway during municipal elections next year.

A sign outside the ACN headquarters on Oct. 22. Photo by Marco Longari/AFP/Getty Images.

10. This movement has spread far beyond South Africa.

Supporters of the movement have gathered in London, New York, and even Duke University in North Carolina.

President Zuma announced on Oct. 23 that he would freeze fees, which is a major victory for the movement:

"Government understands the difficulty faced by students from poor households and urges all affected to allow the process to unfold to find long-term solutions in order to ensure access to education by all students."

But some students are vowing to continue their activism until the government provides free education to all South Africans.

Even if the #FeesMustFall movement cools down in the days ahead, this doesn't look like the end of youth activism in South Africa.

There is an enormous economic divide along racial lines in South Africa right now. And until that's been addressed in a more comprehensive way, young people will continue to demand justice.