With confirmation fast approaching, Democrats need to pick up one more vote against DeVos. 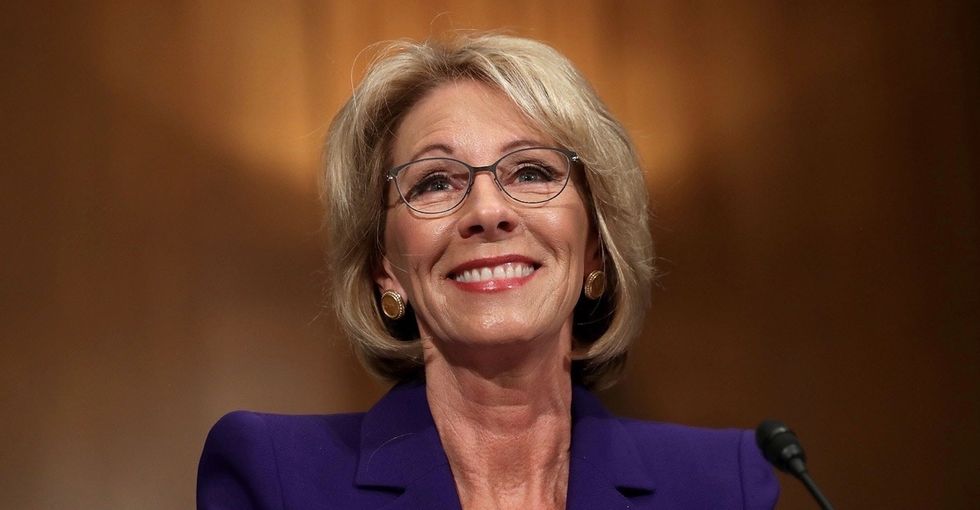 At noon on Tuesday, Feb. 7, 2017, the U.S. Senate will vote on President Donald Trump's secretary of Education nominee.

This is normal. What's happening in the 24 hours leading up to the vote, on the other hand, is not normal at all.

In an effort to win over one of their Republican colleagues, Senate Democrats are pulling an all-night filibuster as they take turns making the case against Betsy DeVos, Trump's choice to head the Department of Education. For 24 hours, Democrats plan to hold the floor in the run-up to a vote that may very well determine the future of America's public education system.

DeVos speaks during her confirmation hearing on Jan. 17, 2017. Photo by Brendan Smialowski/AFP/Getty Images.

Two Republicans have already indicated plans to vote against DeVos. It'll take at least one more vote to tip the scales.

Last week, Sens. Susan Collins (R-Maine) and Lisa Murkowski (R-Alaska) came forward to announce that they would not vote to confirm DeVos. With the 46 Democrats, two Independents, and now two Republicans lining up against DeVos, it looks like there are 50 votes for confirmation and 50 votes against.

Should the vote end up being a tie, Vice President Mike Pence has indicated that he will cast a tie-breaking vote to confirm DeVos as the next Education secretary.

There are a number of reasons to oppose DeVos' nomination that should have people on both sides of the aisle feeling a bit nervous.

For one, DeVos has never attended or worked in a public school, her children have all gone to private schools, and she has no experience working in government or education. There's also the fact that she's a proponent of shifting tax dollars from public schools to charter programs in an effort to "advance God's kingdom" through the education system.

And finally, there's the simple matter of her nomination being "pay-to-play" politics at its absolute worst. DeVos and her family have donated more than $200 million to Republicans through the years. In 1997, she even wrote, "I have decided to stop taking offense at the suggestion that we are buying influence. ... We do expect something in return. We expect to foster a conservative governing philosophy consisting of limited government and respect for traditional American virtues. We expect a return on our investment."

Additionally, DeVos had a pretty disastrous confirmation hearing in which she suggested that guns in schools might be a good idea because of bears, showed ignorance about a federal disability law, dodged questions about protecting LGBTQ students and victims of sexual assault, and made it abundantly clear why her confirmation appears to be the one cabinet nomination that may not meet the required 51-vote threshold.

So far, the filibuster is off to a strong start, as Democratic senators implore their colleagues to prioritize the welfare of America's students over party lines.

No matter how this vote goes, it's good to see the Senate living up to its potential as one of the world's great deliberative bodies.

If there's a case to be made against (or for) DeVos, it will most certainly be made between now and tomorrow's vote. The exchange of ideas and action that follows is democracy in action.

It's even better to know that elected officials take into account what constituents think. Sen. Murkowski indicated that her decision to vote "no" was influenced by "thousands of Alaskans who have shared their concerns about Mrs. DeVos as Secretary of Education, by phone, in person, by email and through petition."

Between now and when the Senate votes on DeVos, there's still time for constituents to take action — whether it's calling their senators to thank them for their vote against DeVos or trying to convince them to change their minds.

If you're interested in calling but aren't sure what to say? No worries. 5 Calls is a great resource for calling your elected officials on any topic.

Watch the 24-hour action from the Senate floor filibuster here:

WATCH LIVE: Democrats in the Senate will hold the floor all night to protest the nomination of Betsy DeVos to secretary of Education.