Greg Hardy gets his you-know-what handed to him by Katie Nolan when he acts flippant about abuse.

Her reaction to his macho front is actually the best part. 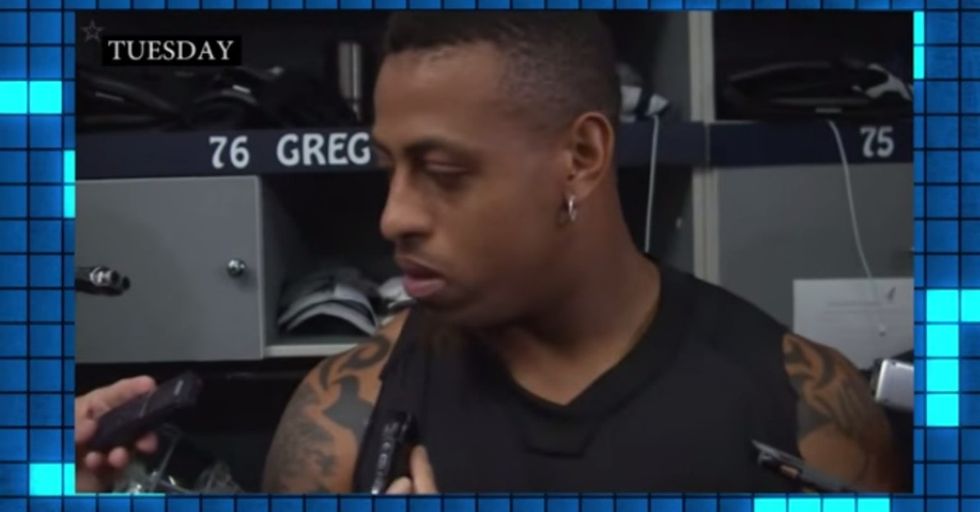 The NFL has been trying to patch up its image through some slick PR.

After getting major flak for their perceived indifference to domestic violence, the NFL partnered with No More, an organization that's been criticized for not clearly giving any of the money raised to domestic violence programs. Together, they put out NFL-oriented ads to make it seem like the league really cares about addressing partner abuse.

They took a hard stance with Ray Rice, issuing an indefinite suspension (which now is overturned on an appeal). He's technically eligible to play — it's just that he can't get any teams to touch him with a 10-foot pole. The NFL had to freeze him out. The public wasn't having it any other way after the horrifying videos surfaced of him punching out his then-fiancee Janay.

Ray Rice before the epic and deserved fall from grace. Image by Wallstreethotrod/Wikimedia Commons.

Is it anything more than a polished PR move, though?

We all know about Ray Rice, but what about Greg Hardy?

He was suspended last year for a vicious attack on his girlfriend. It's just that TMZ never got hold of a video of it. Now his suspension has been drastically reduced, and he's returned to his team.

If the NFL's stance on domestic violence had any real sincerity behind it, as opposed to being shrewd PR calculation, would they have lifted Greg Hardy's suspension early in spite of his complete lack of remorse?

There's a lot of speculation the NFL isn't doing more on domestic violence than feel-good ads and lip service.

Not after Hardy's bizarre interview responses upon returning to the Cowboys (read on and watch the video below for those).

She takes real issue with the fact that when asked even gently about his regrets for the reason he was suspended, Hardy makes it clear the only thing he regrets is not being there for his team. Then he goes on to make comments about looking forward to seeing Tom Brady's wife, supermodel Gisele Bundchen, at games. Some reporters seem to egg him on regarding other "attractive" NFL wives, as if it's funny.

Katie absolutely dismantles the layers of problems with the NFL, her colleagues, and Greg Hardy's flippant attitude:

"Greg Hardy had to pretend to respect women for TWELVE minutes — just twelve minutes — and he couldn't even do that. ... Expecting a garbage human, who has been punished for being garbage, to come back from his suspension and not IMMEDIATELY resume being garbage, is asking the bare minimum. And if me hoping that the League, and the Cowboys, and their PR people, and the media could act with just a shred of human decency is ruining football for you, then I'm disappointed, I guess, in how much we're willing to accept in order to protect our precious Sundays."

You can see the whole well-deserved tongue lashing by Katie Nolan here, along with the nonchalance Greg Hardy displayed that prompted it.

Katie Nolan just emerged as a heroic and truthful voice on domestic violence in the NFL. Cheers to her for saying it, and cheers to you for sharing it.