When it comes to puppies, pit bulls are pretty perfect. 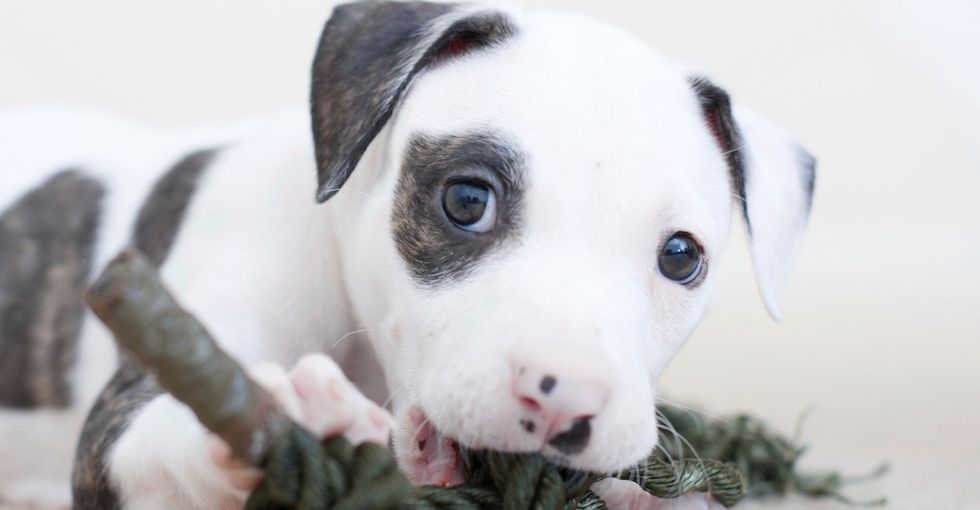 No matter what you've heard, pit bulls are actually a really friendly, loving breed of dog. They just get a bad rap.

Some cities (and even entire countries) have at one point or another tried to deter ownership of pit bulls on the basis that the dogs were vicious, aggressive, or otherwise dangerous. At its peak, more than 700 cities and towns in the U.S. had pit bull bans. For a while there, the outlook wasn't so positive for our four-legged friends.

"You're afraid of me? But I'm so tiny and adorable and I'll love you forever and ever." Photo from iStock.

Over time, though, it became clear that banning pit bulls didn't actually do much to reduce the number of dog bites being reported, and the problem was less with the breed itself and more with how the dogs are cared for and socialized.

The Obama administration even weighed in on breed-specific bans, stating its opposition.

"We don't support breed-specific legislation — research shows that bans on certain types of dogs are largely ineffective and often a waste of public resources," reads the response to a 2013 "We the People" petition.

As we all know, President Obama has a bit of a soft spot for cuddly dogs — but then again, who doesn't? Photo by Pete Souza/The White House via Getty Images.

The response concluded that "any breed can become dangerous when they're intentionally or unintentionally raised to be aggressive" and it provided a list of steps put forward by the Centers for Disease Control and Prevention to reduce the risk of dog bites.

But stigma continues to go along with pit bulls. That's why pit bull owners have taken to Twitter to #ShowUsYourPits.

Again, that's "pits" with a "p." If you misread that hashtag, you're probably going to be really disappointed with the rest of this post. Sorry.

Mary shared a photo of her two rescues, Hazel and Brisket.

This goofball is named Chico.

Andre here is a 5-month-old pit bull/Jack Russell mix from Second Chance Rescue. Oh, and also a New York Mets fan, but I can forgive him for that (go Cubs!).

And Roscoe is just too cool for his own good.

The #ShowUsYourPits hashtag was started by Animal Planet to promote the return of its show "Pit Bulls and Parolees."

Pit bulls, somewhat similarly to people recently released from prison, can have a hard time finding a second chance in society — hence the show's name.

The show follows the story of dog trainer and founder of New Orleans' Villalobos Rescue Center Tia Torres. She and a crew made up of people out on parole work to rehabilitate and help find homes for abused and abandoned dogs. The show bills itself as "a chance at redemption for both man and man's best friend."

Do you have a pit bull? Add a photo of your buddy to social media with the hashtag and help fight the stigma!

SO CUTE. SO CUDDLY. SO HAPPY. Photo by iStock