Feel better after being outside? There’s a scientific reason for that.

Throwing shade at mental health. But, you know, the nice kind of shade. 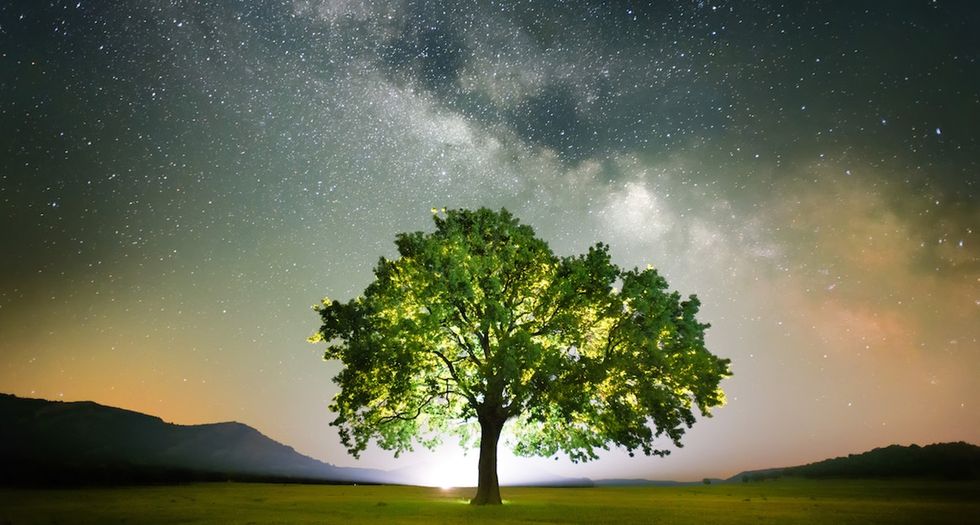 As long as humans have been reading and writing, thinkers and researchers have been studying trees and their immense impact on our world.

We know they're powerful carbon sinks, sucking up carbon emissions and helping purify our air and limiting runaway climate change. We know their extensive root systems act like giant sponges, helping to sop up rainwater during storms and prevent erosion. At all stages of their life cycle, they provide habitats for other living things — from moss to lichen to insects to birds to delightful Disney-esque woodland creatures.

Nature is adorable! GIF from "Bambi."

With all of the things trees do for the world, it's easy to wonder: What other ways do trees influence our lives? When people say they feel better after a long walk in the woods, is there a psychological, or even physiological, reason for that? According to scientists: yes. There really is.

The physical health benefits of trees are hard to deny.

A 2014 study in Environmental Pollution tried to quantify the health benefits of trees in America. Looking at data from 2010, they determined that each mature tree removes 17 metric tons of air pollution, and collectively, trees prevented 670,000 cases of respiratory problems like asthma and 850 human deaths. A 2015 study of residents in a Toronto neighborhood found that people who reported better health lived on streets with more than 10 trees. Researchers were able to equate those improved health perceptions with an income increase of $10,000 or a relative age of seven years younger.

Being around trees isn't necessarily the only way to reap their benefits  — sometimes just having the ability to look at them can help.

A famous study of surgical patients recovering in a Pennsylvania hospital in the 1970s found that persons whose rooms overlooked trees recovered faster than those who didn't have that view. Japanese healers advocate for the health benefits of shinrin-yoku, ("forest bathing"), where people take long walks in the woods while inhaling complementary aromatherapy scents. A peer-reviewed study of shinrin-yoku found that it helped people lower levels of stress hormones and decrease their blood pressure, with benefits lasting up to one month.

Whatever it is that's going on in our brains at the time, it really seems that just being in the presence of trees can leave us happier and more content.

Maybe they remind us that life grows and goes on and flourishes in the toughest places. Maybe there’s something about leaves, about vibrant colors, about the smell of strong wood, or the way sunshine looks dappled through summer leaves. Psychologists believe there's truth to that idea. They call spending time in nature attention restoration theory, or ART. The theory behind it is that natural environments demand so much less of our attention than cities do and that being in nature allows our brains time to rest.

Whatever it is about trees that improves our mental health, it’s powerful and potentially transformative. Even city planners are taking notice.

In the past decade, major cities, including Barcelona, New York, and Vancouver, have made increasing green spaces and their urban canopy a big priority. For Vancouver, this includes planting lots of new trees, legislating protections for older trees, protecting parklands, and encouraging residents to spend time outside.

Chances are, though, that you're not reading this while you're outside. Maybe you can't even get outside right now. In that case, maybe a few minutes spent looking at photographs of particularly lovely trees can give us some of the same calm, fuzzy feelings? Let's try!

Worried about your taxes? This beautiful tree has been around for 250 years — longer than every American dollar in circulation.

This gnarly pinyon pine is estimated to be between 80 and250 years old. Image via Grand Canyon National Park/Flickr.

Feeling alone? Let this beautiful moss-covered oak remind you that living things can thrive together — and then call a friend to tell them you care.

Ex got you stressed? This tree has withstood winter storms for decades. Its boughs have adapted to weather them, just as you can and you will.

Hal Borland famously said, "If you would know strength and patience, welcome the company of trees."

He's right, of course. Though we'd also add in "peace of mind" too.