Even small acts make a big difference. Just ask anyone who knew this firefighter. 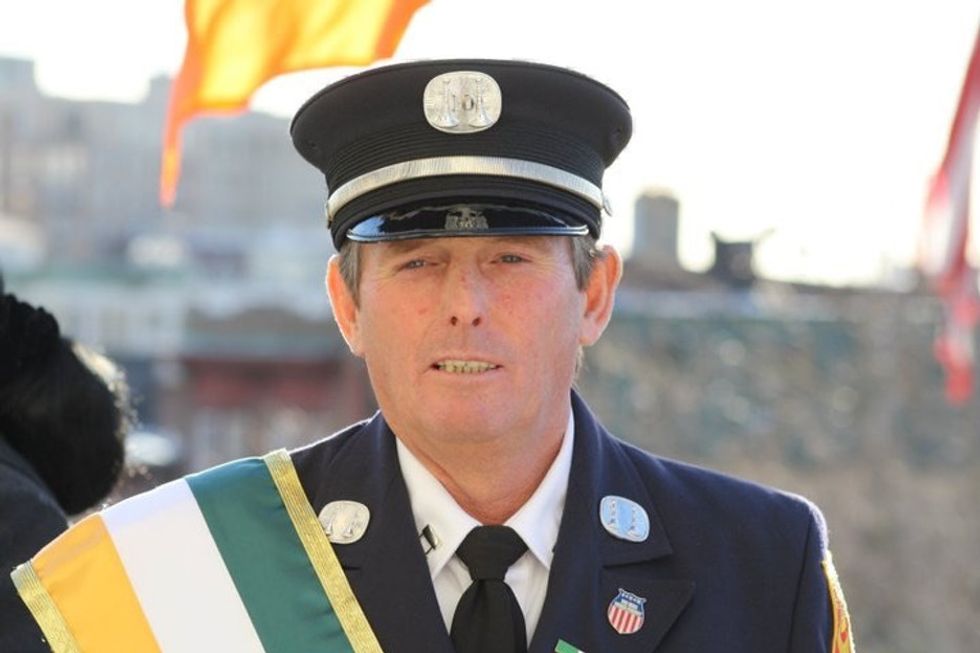 He wanted to do more than his "job."

He wanted to keep helping, even after the fires were put out.

Lee and some of his fellow firefighters in 1987. All images via Cheryl Lee, used with permission.

If a family in the community lost all their belongings in a fire, Mark would come back later to hand-deliver clothes, toothbrushes, and anything else they might need.

"He was also a roofer," his wife, Cheryl, said. "So if someone had a fire in their house and he had worked that fire, the next day he would get back in his truck and go repair their roof for them so they would be able to go back home."

Mark wanted to be there for his neighborhood. "If you had something going on, he would just sit on the front bench of the firehouse, just sit down and talk to people," said Carina Escolastico, who lives across the street from the firehouse. "He always had a smile for everybody. It was motivating to have him around you because he would just bring positive energy."

When people were injured in a fire, Mark would visit them in the hospital, and if they died, he would attend their funerals.

Lee and some of his fellow firefighters outside the fire station during the Jersey City Fire Department toy drive in the 1990s.

"He just took care of the community all of the time," Cheryl said.

Mark would even spring into action on family vacations if help was needed. In Mexico, he rescued five men from drowning after they got caught in a riptide.

But in his community, he was especially driven to help the children.

When he first became a fireman, Cheryl said, he started a new tradition for the kids in his neighborhood: free ice cream. "Every Friday payday, he bought the whole neighborhood ice cream. And I would say, 'Honey, you just got the paycheck,' and he would just say to me, 'But the kids are waiting for their ice cream.'"

Mark also helped build playgrounds in the neighborhood, worked with the Special Olympics, and, for 27 years, led the Jersey City Fire Department’s annual toy drive so that he could make sure that no child was without a present for the holidays.

"[The toy drive] just kept getting bigger and bigger every year," remembered retired firefighter Thomas Facciola, who worked alongside Mark at the firehouse for about 20 years. "It was almost like a yearlong thing because he would keep adding people. ... He would go to all the churches and schools, to all the projects, just to add more kids to the list."

Carina said she will never forget when Mark delivered toys to her daughter as part of the Christmas drive. In 2009, she had given birth to baby girl diagnosed with health issues and brain damage, and as a new single mother alone for the holidays, Carina said she felt down and a little depressed. But Mark brought her new family cheer.

"He just knocked on my door and said 'Merry Christmas,' and he gave [my daughter] her first toys and stuff," she recalled. "He brought a lot of joy to me and my baby at that time. ... He brought tears to my eyes."

Lee and other first responders at Ground Zero.

Mark had worked a 24-hour shift the day before 9/11, and he had planned to take the next day off, Cheryl said, but as soon as he heard that a plane had hit the World Trade Center, he headed straight into the city.

And he stayed at the site for seven straight days.

"He ate there and slept there. ... He did search-and-rescue, he worked on the bucket line," Cheryl explained. "He came home, and he had a very bad cough, you know."

Lee and other first responders at Ground Zero.

Years later, Mark began to develop a series of chronic illnesses associated with his efforts at Ground Zero.

Mark worked as long as he could, both in the line of duty and through his volunteer causes, until he was too sick to continue.

"He went into the hospital in January [2014], and they said he couldn’t work anymore, but he said to me, 'I’m going back, I’m going back,'" Cheryl remembered. "And he told the doctors. He told everybody, 'I can do this. I can do this,' but in reality, he really couldn’t."

Mark died at the age of 54 on May 9, 2014. Even in death, he helped others by being an organ donor — donating his corneas and skin for burn victims.

Cheryl Lee and one of the Engine 10 firetrucks dedicated in memory of her husband.

Before he died, Mark's family made him a promise that they would continue his work for him in his memory. And they are doing just that.

Cheryl now volunteers with a number of local community organizations, including the toy drive, which they have renamed the Capt. Mark Lee Christmas Fund Drive in his memory.

Mark chose to live his life knowing that every decision you make — from the biggest to the smallest — affects others.

Whether it is being there to listen to a neighbor or helping families rebuild after a tragedy, any positive action can help make someone else's day just a little bit better. Even if these gestures seem small at the time, they can have lasting impacts on our communities for the better.

Carina recently applied to have the street with his firehouse dedicated to Mark because of the lasting effects he had on his community. "We still miss him. We will always miss him, and that is why we want to dedicate the street to him to recognize all his hard work — 29 years serving our community."

Through his service in the line of duty and his volunteer work, Mark worked diligently to make the world a better place not only for his own family, but for his community. And in the process, he inspired others to follow in his footsteps.

Lee and his son.

"If we had fruit in the house, [my daughter] would cross over to the firehouse and bring an apple, a banana, ever since she was two," said Carina. Her daughter is now seven. "She thought that Mark was nice — he would give her toys — so she still remembers him."

And Cheryl said her family was inspired to do good, too. "My son is just like him … [and Mark], he inspired me. He made me who I am today," Cheryl said. "He touched so many lives, and he will continue to touch their lives. We will make sure of that."

Inside the Beatles’ messy breakup, 50 years ago

This article originally appeared on 4.10.20 via The Conversation

Fifty years ago, when Paul McCartney announced he had left the Beatles, the news dashed the hopes of millions of fans, while fueling false reunion rumors that persisted well into the new decade.

In a press release on April 10, 1970 for his first solo album, "McCartney," he leaked his intention to leave. In doing so, he shocked his three bandmates.

The Beatles had symbolized the great communal spirit of the era. How could they possibly come apart?