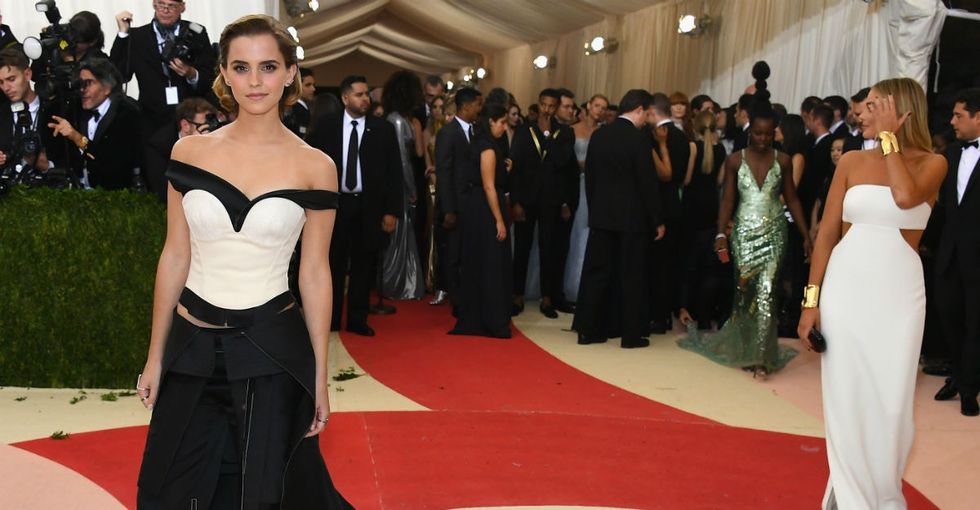 Emma Watson knows how to rock a red carpet, and the Met Gala on May 2, 2016, in New York City was no different.

The event's theme was "Fashion in an Age of Technology," and Watson totally nailed it.

Not only was her gown stunning in and of itself, it was also created using sustainable products.

As Watson explained, the gown combined "creativity, technology, and fashion" to send a bold message about curbing waste.

"I am proud to say it is truly sustainable and represents a connection between myself and all the people in the supply chain who played a role in creating it," she wrote on Facebook.

According to Watson, the fabrics of the dress were woven from recycled plastic bottles — "one of the biggest pollutants on the planet," she noted. The cotton used in the design was organic — not the conventional kind that uses chemicals to grow and thus damages the earth and puts workers' health at stake. Even the zippers were crafted from recycled materials.

Watson has no plans to keep the gown locked away in a closet forever either.

"It is my intention to repurpose elements of the gown for future use," she wrote. "The trousers can be worn on their own, as can the bustier, the train can be used for a future red carpet look … I’m looking forward to experimenting with this. Truly beautiful things should be worn again and again and again."

Watson wasn't the only star committed to going green on the red carpet. Lupita Nyong’o wore a jade sequin dress that showed style and sustainability can totally go hand-in-hand.

Can we take a moment to appreciate that amazing hair style? Photo by Timothy A. Clary/AFP/Getty Images.

"The dress is a celebration of craftsmanship and truly reflects the theme" of the gala, according to Eco-Age, the brand consultancy group that partnered with the celebs.

The global fashion industry isn't exactly known for its ethical treatment of people or the planet. But there's been a push for change in recent years.

"When we think of pollution, we envision coal power plants, strip-mined mountaintops, and raw sewage piped into our waterways," as Glynis Sweeny wrote for AlterNet last August. "We don’t often think of the shirts on our backs. But the overall impact the apparel industry has on our planet is quite grim."

From our reliance on cotton (a thirsty crop that needs more than its fair share of water to grow) to an over-dependence on shipping materials cheaply from around the world, thus increasing carbon footprints, Big Fashion really hasn't prioritized environmentalism (like, at all).

That's just part of what makes the #GreenCarpetChallenge designs Watson, Nyong'o, and Robbie, wore on the Met Gala red carpet such an important statement.

Photo by Timothy A. Clary/AFP/Getty Images

Livia Firth, who co-founded the Green Carpet Challenge, is looking at the future of the fashion industry with hope.

"'Fast fashion' will slowly die as we will start realizing they have taken us for a ride for too many years, addicting us to buying too fast and too cheaply," Firth told Conscious Living TV of an industry that sacrifices the Earth and workers' well-being to produce cheap clothing.

"2016 is going to be the year where we will take fashion back for what it is: beautiful clothes made with love and quality," Firth predicted.

Watson, Nyong’o, and Robbie can't revolutionize the fashion industry by themselves, but their red carpet looks can inspire us all to be a little bit more critical of our own closets.

And that's the best way to be fashion forward.