Elephants in sweaters are adorable. Until you realize why they have them. 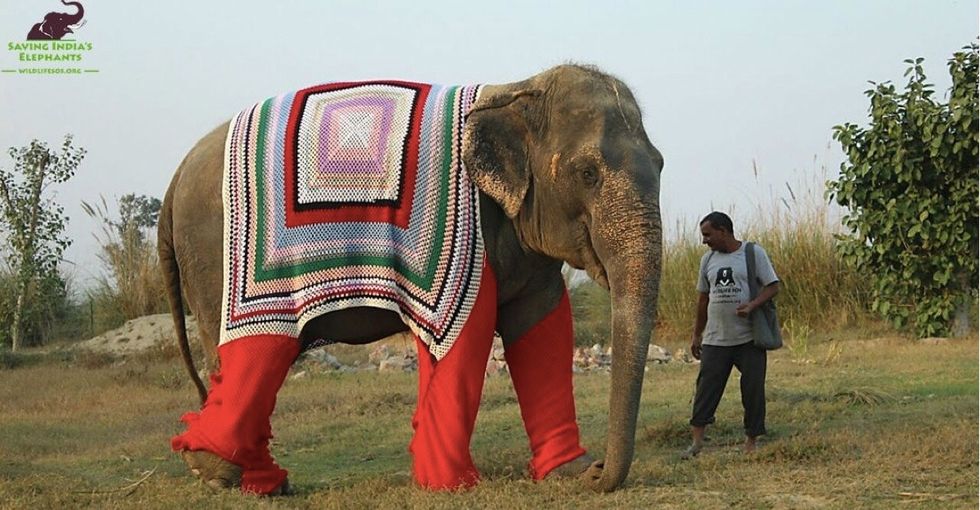 Suzy is toothless, blind, and just one of 23 formerly abused elephants living at the Wildlife SOS Elephant Conservation and Care Center in Mathura, India.

"The rescued elephants under rehabilitation at Wildlife SOS have been rescued from shocking circumstances," said Geeta Seshamani, the center's secretary and co-founder. "We aim to provide them with a safe habitat where they can live like elephants.

Suzy takes a walk with help from her seeing-eye humans. All photos via Wildlife SOS, used with permission.

Wildlife SOS knows how to deal with damage from poaching and captivity. But the threat of below-freezing weather? That's something new.

Despite their thick hides and massive size, elephants are still susceptible to the effects of cold weather. It's not a problem they usually encounter in their natural habitats, but, well, the effects of climate change are altering the places these animals call home.

According to Kartick Satyanarayan, Wildlife SOS's co-founder and CEO, cold weather can aggravate arthritis and other problems in even the most able-bodied elephants. For elephants like Suzy, it can be even worse. "It is important to keep our elephants protected from the bitter cold during this extreme winter, as they are weak and vulnerable having suffered so much abuse making them susceptible to ailments such as pneumonia," Satyanarayan said.

Humans have problems with the cold too. That's why we wear coats. So Satyanarayan and his team figured, why not do the same for elephants?

Thanks to a few women from the nearby village and one dedicated stitcher on staff, Suzy and the other elephants at Wildlife SOS will each have their own tarpaulin cloaks to help keep them warm through the chilly winter, while also protecting them from rain and dew.

Here's Suzy showin' off her stuff:

"They really took to their jumpers!" Satyanarayan told the Daily Mail.

"I know in some countries it is a bit of a joke to wear the most outlandish one you can for Christmas. But the elephants care less about fashion and more about being warm."

The elephant jumper project is still a work in progress while they figure out what's best for the animals.

"We want to come up with a solution to keep these animals warm, that’s all," explained Baiju Raj, director of conservation projects, in an interview with Scroll.In magazine.

For example, they tried to do a photoshoot with the elephants wearing the pachyderm equivalent of footie pajamas in hopes of raising money to continue their efforts and find the best approach for elephant outerwear. But according to Raj, "The pajamas made the elephants uncomfortable. They kicked them off after the shoot."

As delightful and adorable as these winter coats might look, it's important to remember they're just temporary solutions for bigger problems like poaching and climate change.

We can't undo damage done to the planet or the other animals that inhabit it. But it's good to know that we can still find solutions to protect the world and animals we have now. I'm sure that Suzy the elephant appreciates it more than we know