Some cities are going to lose their perfect weather to climate change. How'd you do? 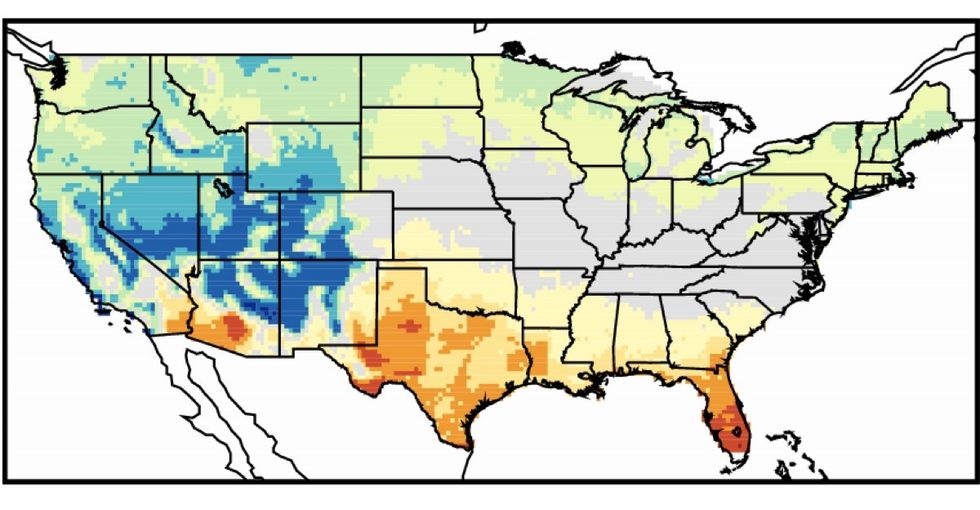 What's the weather in your city like right now?

In Seattle, everyone's walking around with umbrellas and overcoats. We're all waiting for nice, mild weather to return come spring.

But is that nice, mild weather still going to be there in 100 years?

Scientists have studied how climate change is going to affect big, dramatic weather events. We're pretty sure hurricanes will become stronger and droughts may be longer and more intense, but there hasn't been a lot of time devoted to nicer days.

Now scientists from the National Oceanic and Atmospheric Administration and Princeton University are tackling just that.

They've found the United States is in for slightly milder winters but will be ravaged by harsher summers.

What the U.S.'s weather might look like in 2100. Blue is nice. Brown is not. Image from Karin Van Der Wiel/NOAA/Princeton University.

The researchers defined mild weather as 64-86 degrees Fahrenheit with low humidity and low rain. Picnic weather, in other words.

So how does your city stack up?

Virtually all U.S. cities conform to this mild-winter, harsh-summer theme. Numbers-wise, Seattle and Los Angeles will have their harsh summers balanced out by the milder winters. But others ... yikes. Chicago could lose nine days of good weather by 2100. And Miami ... dude, I'm sorry, Miami. By the end of this century, Miami could lose four weeks of picnic-ready days.

Comparatively, America isn't that badly hit. If you're one of the 644 million people in Southeast Asia, 1.2 billion Africans, or 1.3 billion people in India, well, we've got some bad news. Those regions are pretty thoroughly on the fewer-perfect-days side of the equation.

Mild weather matters a lot more than you might think.

Weather affects a ton of businesses — just think about sports. It's one thing to watch a baseball game on a mild, breezy day, but not as many people will be up for a game when it's 100 degrees in the shade. Tourism, transportation, construction, and farming may be affected too, said the authors.

Even if you're celebrating your luck because you're a Seattle or L.A. resident, not to be a downer, but remember that mild weather is just one part of our climate and globe. We'll still have to deal with its other effects, such as sea level changes. And with 2016 being the warmest year on record, these trends are likely to continue.

The scientists hope this will help put climate change in everyday terms for people.

"Extreme weather is difficult to relate to because it may happen only once in your lifetime," study author Karin van der Wiel said in a press release. By focusing on everyday weather, the scientists believe more people will be able to grasp how our climate is changing.

Climate change is a big challenge and it's going to happen, but it's not insurmountable. We know how to lessen its effects. We know how to adapt. And if we act now, we might even be able to save Miami a few more nice days.