Dutch men around the world are holding hands in support of a gay couple that was attacked. 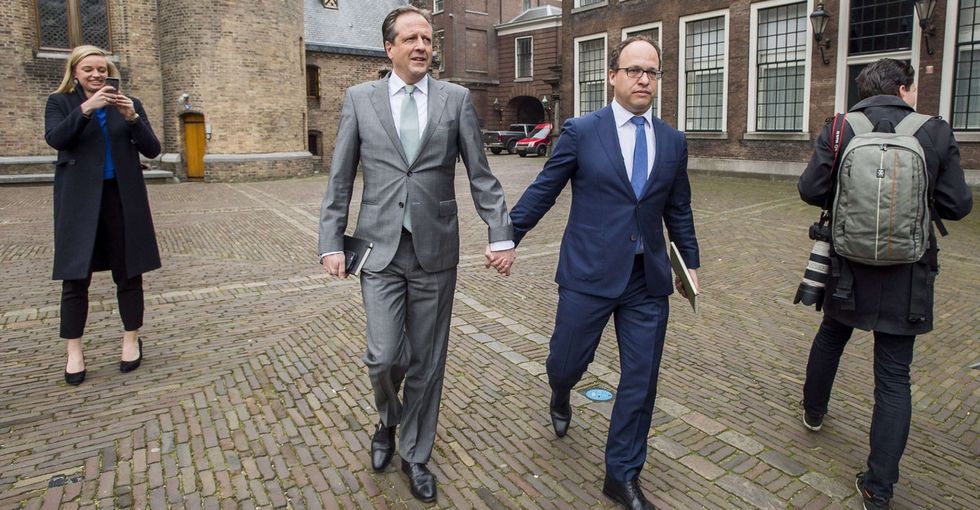 Dutch people from the Netherlands to New York are rallying in support of a gay couple who suffered a devastating assault in the city of Arnhem.

According to a New York Times report, the couple, Jasper Vernes-Sewratan and Ronnie Sewratan-Vernes, said they were holding hands when a group of teenagers attacked them after a party.

Straight, male politicians in the Netherlands are holding hands in an act of defiance after assault of two gay men. https://t.co/wnMmd21Bxf
— Greg Hogben (@Greg Hogben)1491403669.0

A hashtag started — #allmenhandinhand — to show solidarity against anti-LGBT violence.

And the show of solidarity soon spread around the world — with Dutch United Nations staff taking part in New York.

As did the members of N.E.C. Nijmegen, a Dutch soccer team.

The Netherlands was the first country in the world to legalize same-sex marriage, and rights for the LGBT community enjoy broad public support there.

"In the Netherlands, we think it's quite normal, but apparently for some people, it's not," Pechtold, the leader of the liberal Democrats 66 party, told 4 News. "So I think it's important this week that we show that it's absolutely normal."

Politicians across the political spectrum vowed to take a tough line on anti-LGBT violence in the wake of the assault.

"New government or not, this is top priority either way," conservative Prime Minister Mark Rutte said at a news conference.

In the meantime, the sight of hundreds of Dutch men holding hands around the world should be a wake-up call that couples of all genders in all combinations expressing their love in public will never go back to not being normal.