Don Jr.’s tweet about the Mueller report proves he definitely didn't read it. 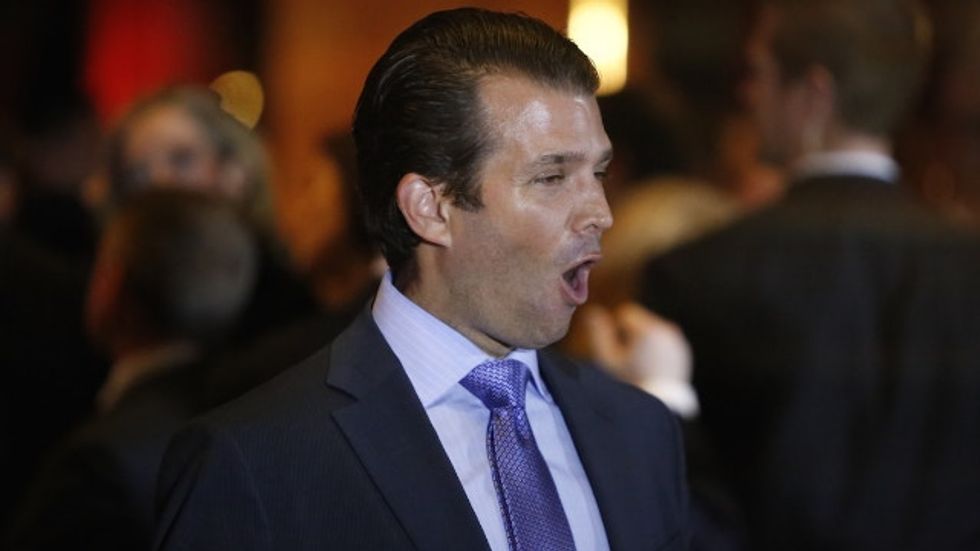 Donald Trump Jr. has really upped the ante on how ignorant he presents himself to the general public. On Thursday, special counsel Robert Mueller and his team of investigators revealed they don't plan to prosecute the president's eldest son for collusion because he is "too ignorant to violate election laws."

The conclusion expressed in in the Mueller report did not name 41-year-old Don Jr. as innocent, but rather, too dim to knowingly break campaign laws:

"The Office determined that the government would not be likely to obtain and sustain a conviction for two other reasons: first, the Office did not obtain admissible evidence likely to meet the government's burden to prove beyond a reasonable doubt that these individuals acted 'willfully,' i.e., with general knowledge of the illegality of their conduct; and, second, the government would likely encounter difficulty in proving beyond a reasonable doubt that the value of the promised information exceeded the threshold for a criminal violation."

While most full-grown adults wouldn't feel so excited about being officially called too ignorant to commit a crime, Don Jr. took it as a win and immediately posted an all caps rebuttal on his Twitter.

As if to corroborate the Mueller Report's estimation of his intelligence, Don Jr.'s response was exactly what a child would yell after being accused of something by their parents. This did not go unnoticed by the general public.

People were quick to point out the irony of him celebrating over being called stupid, while others assumed he didn't fully read the report's estimation of him.

@DonaldJTrumpJr You might wanna keep the braggadicia down there, Jr. I realize you live with many challenges and do… https://t.co/yVUgwvXh8L
— Nancy Lee Grahn (@Nancy Lee Grahn) 1555605911.0

Others pointed out how the report in no way makes Don Jr. look innocent, in fact, this will likely not be the last word on his innocence.

If anything, Don Jr.'s response to the Mueller Report only supports the conclusion that he is too dim to fully understand campaign laws, but that is still a far cry from lawful innocence.

'Top Gun: Maverick' is apparently a total Gen X win and frankly, we deserve this

If you're anything like me, when you heard that a "Top Gun" sequel was being made nearly three decades after the original, you may have rolled your eyes a bit. I mean, come on. "Top Gun" was great, but who makes a sequel 30 years later and expects people to be excited? Especially considering how scrutinizing both audiences and critics tend to be with second films.

Then I saw a trailer for "Top Gun: Maverick," and was surprised that it looked … super not terrible. Then more and more details about the film emerged, then more trailers and behind-the-scenes footage were released, then early reviews started rolling in and … you guys. You guysssss. I don't know how the filmmakers managed to pull it off, but everything about this film looks absolutely incredible.

And frankly, as a member of Gen X who saw the original "Top Gun" at least a dozen times, I could not be more thrilled. We deserve this win. We've been through so much. Many of us have spent the better part of the past two decades raising our kids and then spent the prime of our middle age dealing with a pandemic on top of political and social upheaval. We've been forgotten more than once—shocker—in discussions on generation gaps and battles. So to have our late-'80s heartstrings plucked by an iconic opening melody and then taken into the danger zone in what reviewers are saying is the best blockbuster in decades? Yes, please.