Celebs reveal the absurd reason why we haven't beaten AIDS in telling PSA.

“So why aren't we talking about it?" 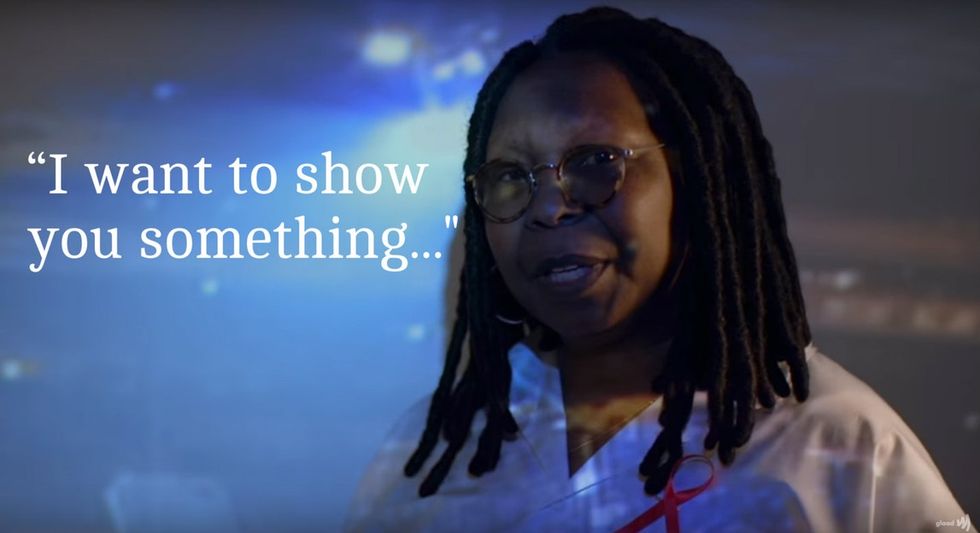 Right now — this very moment — we have the tools to stop AIDS in America ... but the S-word is getting in the way.

Nope, not that one. Stigma.

“I felt very lonely," Justin Bell of Jacksonville, Florida, told WJCT of his emotional health after being diagnosed with HIV in 2007.

Because he'd lived a "clean life," he explained, he didn't think it was possible for him to contract the virus. It took a near-death emergency room visit to spur his diagnosis.

"I felt as if no one else could possibly understand what I was going through."

1.2 million Americans are living with HIV.

Unfortunately, Bell's story is not unique. Despite the fact that we've come so far with prevention and the science behind fighting the virus, misconceptions about what kinds of people have HIV make it much more difficult to combat.

"Stigma is the greatest driver behind the epidemic," according to GLAAD. "Stigma is what prevents people from taking preventive measures, getting tested, and getting into and staying in treatment. By stigmatizing people with HIV, we are actually making all of society more vulnerable."

Stigma is also a big reason why GLAAD partnered with the Elizabeth Taylor AIDS Foundation to create a new PSA.

And they recruited some star power to help get the message out.

Meredith Vieira, Whoopi Goldberg, Jonathan Groff, Michael Emerson, Tituss Burgess, and Bebe Neuwirth can all be spotted in the 30-second ad released on Oct. 20, 2015, which aims to "inspire, inform, and reignite the passion and action needed to beat the HIV and AIDS epidemic once and for all."

According to Sarah Kate Ellis, CEO and president of GLAAD, the PSA focuses on the form of stigma that persists throughout "the sensationalized and negative media coverage of the HIV and AIDS crisis."

"All too often, the way the media portrays HIV today stigmatizes those who are living with the virus. Currently, the popular characterization of people with HIV we see, in news media especially, is as potential spreaders of the virus, and in some worst-case scenarios, as predators."
— GLAAD

It's a shame, too. Because the facts prove we could be doing so much more in stopping the virus.

HIV is still affecting millions of people, but it's not making headlines like it used to.

About 1.2 million Americans are living with HIV — more than the population of some states. And infection rates of young people — those who didn't witness the AIDS crisis of the 1980s firsthand — are disproportionately high.

According to the CDC, people between 13 and 24 years old accounted for over a quarter of all new HIV infections in the U.S. in 2010. What's more, it's estimated that half of American youth who are infected don't even know it yet.

"Conversation about HIV and AIDS is barely discussed in individual circles and has comparatively fallen out of the news cycle. This is despite the fact that the U.S. has not seen a decrease in new infection rates in nearly two decades."
— Joel Goldman, managing director of the Elizabeth Taylor AIDS Foundation

Here's how you can promote change.

It's OK to start small.

Combating stigma starts with simply learning the facts — like who can contract the virus and how. Then, talk about it — don't be afraid to chat about HIV with loved ones or your partners (it may not be the most romantic discussion topic, but it's an important one). And — this one's big — don't forget to get tested and always use protection. It's crucial.

Learn more about HIV and how you can help prevent it here.

Check out the PSA below: