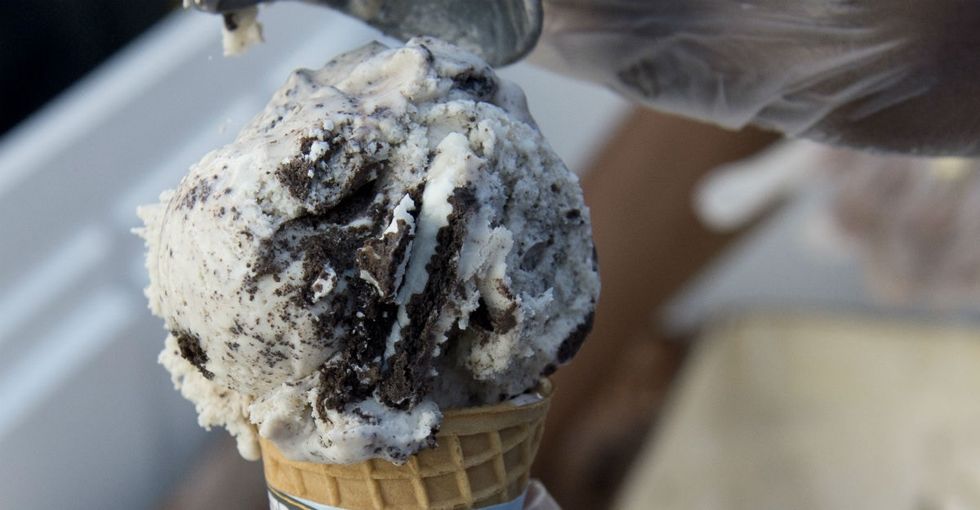 Ben and Jerry's is at it again: churning out flavors you can spoon into your wide open mouth, completely* guilt-free.

*Because you should never feel guilty about eating food you like.

On May 17, 2016, Vermont's most famous dairy dudes, Ben Cohen and Jerry Greenfield, revealed the latest addition to their family of treats with a bigger purpose.

And it didn't disappoint.

Friends, I give you Empower Mint: an ice cream meant to restore the power of the people this election season.

So what's Empower Mint all about? First of all, it's aimed at turning our democracy into an actual democracy.

Through its patriotic branding, the new flavor aims to remind voters we need to take power away from the (ridiculously) wealthy people and corporations that hold too much sway in Washington and hand it back to us, the everyday voters:

"This fudge-filled flavor reflects our belief that voting gives everyone a taste of empowerment, & that an election should be more 'by the people' and less 'buy the people!'"

Cohen and Greenfield don't just talk the talk, either. Just last month, the two were arrested outside the U.S. Capitol for participating in a protest focused on ridding Washington of its Big Money influence. They certainly walk the walk.

These are a few of the protesters who marched alongside Cohen and Greenfield. Photo by Mike Theiler/AFP/Getty Images.

Secondly, Empower Mint wants you to give a damn that our voting rights have been stripped away.

In 2013, the Supreme Court gutted the Voting Rights Act, which had required states with a history of voter discrimination to get a thumbs up from the federal government before passing laws that affect voters. Since the court's ruling, however, certain states have passed eyebrow-raising laws that don't do much in countering the idea they're out to suppress voter turnout among minorities, immigrants, and poor people.

In North Carolina, for instance, advocates argue an unnecessary voter ID law is intentionally discouraging black voters from heading to the polls. In Texas, a law was passed to redraw voting districts so that communities with large immigrant populations have less political power, activists argued.

This doesn't fly with Ben or Jerry, who are encouraging customers to sign a petition to reauthorize the Voting Rights Act on its Empower Mint webpage:

"We must stand together and call on our leaders to not only reauthorize the Voting Rights Act, but to fight back against new laws that undermine our freedom to vote, ensuring a democracy that works for everyone."

I'll eat to that.

So when you spot Empower Mint in an aisle near you, know that's it's not just for you to devour — it's there to remind you we all deserve our voices be heard this November.

Learn more about what Empower Mint is all about from the video below: