Alicia Keys' look at the VMAs shows she meant it when she said she's over makeup.

'I don't want to cover up anymore.' 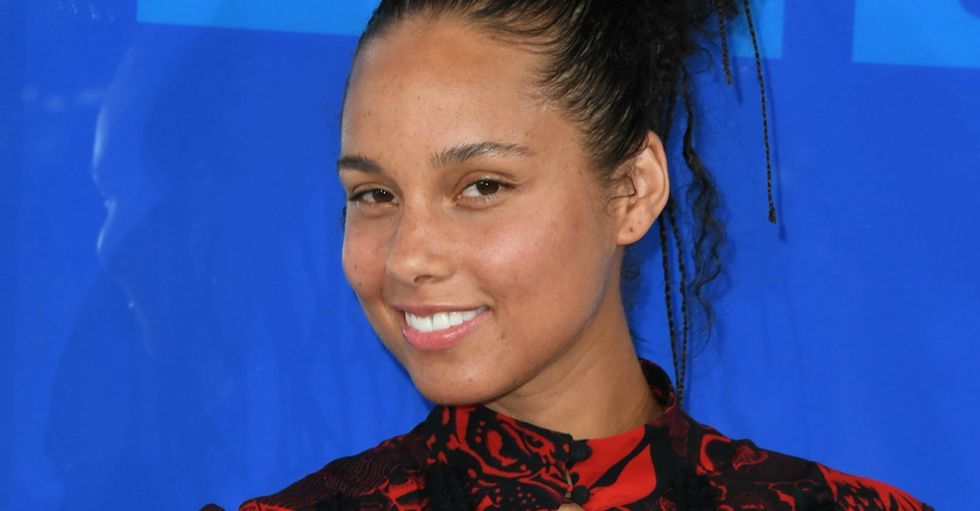 Alicia Keys did something pretty gutsy at the MTV Video Music Awards.

She showed up to the red carpet, husband Swizz Beatz at her side, wearing absolutely no makeup.

We're not talking "no-makeup makeup" either, by the way. (You know, when people use makeup to rock a more natural look?)

Whether she's appearing in promos for her new gig hosting the 11th season of "The Voice" or performing at the DNC, you may have noticed that Keys has been walking out the door without a single dab of lipstick or swipe of mascara.

Keys expressed why she decided to go the makeup-free route in an essay for Lenny in May 2016.

"Before I started my new album, I wrote a list of all the things that I was sick of," she penned in the newsletter, which was co-created by Lena Dunham. "And one was how much women are brainwashed into feeling like we have to be skinny, or sexy, or desirable, or perfect."

"One of the many things I was tired of was the constant judgment of women," she wrote.

"The constant stereotyping through every medium that makes us feel like being a normal size is not normal, and heaven forbid if you’re plus-size. Or the constant message that being sexy means being naked. All of it is so frustrating and so freakin’ impossible."

Keys' decision to ditch makeup is laudable — not because makeup or the women who wear it are inherently bad (they're not) — but because she's embracing what works for her.

People of all genders should be able to wear as much or as little makeup as they choose without feeling like they need to conform to society's expectations (expectations that start kicking in younger than many of us may realize).

To wear makeup or not to wear makeup is a personal choice. When it comes to the images presented in the media, however, it can start to seem like wearing makeup is the only choice. Keys' decision to reject that pressure is setting an amazing example.

No one should feel like they need makeup to hide who they really are, which makes Keys' VMAs look one for the books.

"I don’t want to cover up anymore," she wrote in Lenny. "Not my face, not my mind, not my soul, not my thoughts, not my dreams, not my struggles, not my emotional growth. Nothing."