A school district made a big move to protect transgender students. Here's what that's all about.

This is great news for trans kids in Fairfax County, Virginia. 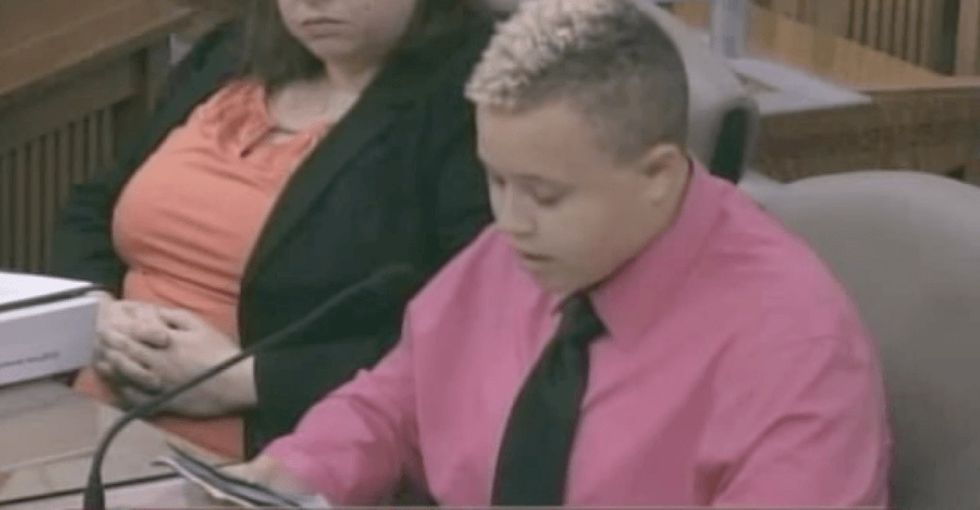 Transgender students in northern Virginia got some good news when the Fairfax County School Board voted to revise the nondiscrimination policy to include gender identity.

The school board adopted the revised policy on the evening of Thursday, May 7, 2015. Until then, the district's policy banned discrimination on the basis of age, race, national origin, disability, religion, and sexual orientation, but not gender identity.

Tamara Derenak Kaufax of the Fairfax County School Board gave a brief rundown of why they decided to include gender identity in the existing policy.

"The decision by the school board to add 'gender identity to our nondiscrimination policy is to provide an environment which promotes equality where every student and employee is treated with dignity and respect. This tells our students and staff that school and the FCPS workplace are places where they can be safe from harassment and discrimination." — School Board Chair, Tamara Derenak Kaufax

So often, the conversation surrounding whether to protect trans students revolves around talk of bathrooms or locker rooms. The reality is, what bathroom a trans student uses is just one of several major challenges they face in school.

Trans kids are harassed, physically and sexually assaulted, and even expelled as a result of their gender.

According to the National Transgender Discrimination Survey, more than 3 out of 4 trans students report being harassed because of their gender.

Worse yet, the harassment isn't solely the product of students. Nearly 1 in 3 trans students reports being harassed by a teacher or school staff member.

The numbers can be startling, but sometimes we need to hear from those most affected by these types of policies — the trans students themselves.

Here's an example of Ashton Lee detailing some of the challenges he faced as a trans student.

When California was considering a statewide policy that would add trans nondiscrimination policies to all schools, one of the most vocal students was then-16-year-old Ashton Lee.
(Full disclosure, in my past job as a freelance writer, I interviewed Ashton for Rolling Stone.)

He discussed how subtle forms of discrimination, both overt and accidental, made school an unnecessarily challenging experience.

Being forced to go by the name he was given at birth, separated from the other boys, and lumped in with the girls in his class, Ashton began to struggle.

He talks about how great it was to finally come to terms with himself for who he really is, but how much it hurts to have his existence erased by classmates, teachers, and parents.

Ashton's public testimony helped put a face to the issue for California lawmakers.

When I spoke to Ashton for Rolling Stone, shortly after the bill passed, here's what he told me about what it meant to him to be able to be treated as himself in school and be treated like any other boy:

"As soon as the governor signed the bill, my school allowed me to use the proper restrooms. If the bill is overturned, it would be a huge blow to me, and I fear that I would have to return to pretending to be someone I'm not at school." — Ashton Lee

It can be hard to take in just how much of a challenge kids like Ashton face. Being a teenager is hard. Why make it any harder?

Hopefully, the actions of the Fairfax County School Board will have the same effect on trans students in northern Virginia as the law had in California.

Kids shouldn't have to worry about being bullied for who they are. And for the naysayers claiming that the school board's decision will lead to boys pretending to be girls in order to use the locker rooms or other nonsense, here's a fact: California's law has been in effect now for more than a year. There have been no issues. The only effect it's had has been an improved environment for trans kids.

Check out Ashton Lee's 2013 testimony in the video below.