A pull-no-punches Q&A with a Native American teacher on how she teaches Thanksgiving. 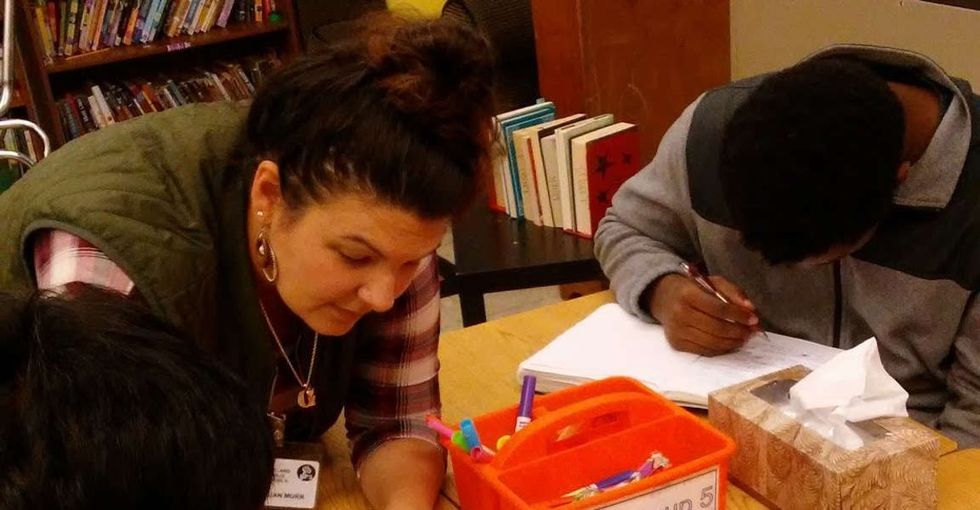 There are two sides to the Thanksgiving story — the one taught in most American grade schools and a more complicated one that coexists alongside it.

Every year, millions of Americans gather around family tables to eat turkey and toast the fellowship of the Pilgrims and their American Indian hosts. And every year, Native American educators attempt to re-contextualize the holiday to add more first-American perspectives to the traditional telling of the history.

The differences are often striking: While most lesson plans treat the first Thanksgiving as a feast co-planned by the Pilgrims and their Native neighbors, from the Wampanoag perspective, the meal was one they happened upon by accident and nonetheless helped rescue with a successful deer hunt. While many non-Native Americans treat the feast as a celebration, many Native people observe the holiday as a day of mourning.

One such educator is Gillian Murr, a fourth-year eighth-grade humanities teacher at Marysville School in Portland, Oregon — and an alum of the American Indian Teacher Program at Portland State University.

Murr, who is Walla Walla and Yankton Sioux, told me about how she approaches the holiday in the classroom and what other teachers can do to include Native perspectives in their lesson plans.

UPWORTHY: What do you love most about your job?

GILLIAN MURR: My favorite part of teaching is really connecting with my students — sharing and learning from them. I don't remember ever having a connection with any teachers when I was younger, and I think it is so important.

I work in a very diverse school, and a Title I school, and I think connections, especially in eighth grade, can make or break the learning that goes on in my class.

UP: What kind of connections do you make with your students? What do you bond with them over?

GM: Having persevered through poverty and oppression, I really try to connect with my students on that level. I think there is a level of vulnerability that is required and that students, this age especially, need and respect.

I let my students know that I have gone through things like they are. I grew up poor, I had parents with addiction problems, I have family members in jail/prison, etc. I think it makes them feel more comfortable in my class. I also share a lot about my own children with them. They in turn feel safe to share and open up in my class.  We also connect about current events, music, TV/movies, etc.

UP: Do you feel like your students come into class with a lot of misconceptions about Thanksgiving?

GM: They come in with all the typical myths. There is always one or two students who have already had the myths debunked, but by and large, the myths are strong when they enter my classroom: "The Pilgrims came on the Mayflower and the Indians helped them by giving them food and helping them plant and grow food, and then they all had a dinner together where the Pilgrims gave thanks."

UP: How do you start breaking down these myths for them?

GM: We always start with what they know and then discuss why that is what they know. One of the overarching questions we always come back to in my class is: "Who is writing the history?" So I like to remind them of that.

Then we just really get into the meat of the lesson. In the past, I have done a couple different lessons. My main objective for them is to be able to look at Thanksgiving from the tribe's perspective.

UP: How do you fold the Wampanoag perspective into your lesson plan?

GM: Last year, I found this great lesson on the Teaching Tolerance website, which has a speech and an essay about Thanksgiving from two different Natives. We analyzed these and then discussed why what they learned is different. We also watch portions of Part 1 of the "We Shall Remain" series. It gives students, especially students who have different learning styles, a solid understanding that it wasn't all potlucks and thanks.

I generally have a class discussion after students have had time to analyze the texts and watch the movies where I have a few leading questions, and they are allowed to come to their own conclusions about why we know what we know. A lot of them are truly blown away with what was left out of history and their earlier teachings.

UP: What parts of the Thanksgiving story are typically left out?

GM: The Native perspective is usually completely left out. I think it is important for them to know while, yes, the Wampanoag people helped the Pilgrims, that help was not reciprocated.

The Pilgrims were religious people, and they gave thanks to their god for subduing the Native peoples. That's a pretty big myth, or lie, rather. Furthermore, this began the long genocide of the Native people of the Americas that continued, and still continues today.

UP: How do your students typically react when they hear this?

GM: There is definitely some surprise involved in their reactions, but at the same time, by this time, we have already studied Columbus, and so they have some prior knowledge about how our history books like to skew things.

Murr and family on the beach. Photo via Gillian Murr.

I don't really get any kind of pushback from students. Maybe partially this is because I am a Native educator, and they don't feel comfortable pushing back, and/or more likely also because I teach a diverse population who already have insecurities about how their families and ancestors have been treated in the history of the U.S.

UP: What's the most important thing you think your students get out of your lesson?

GM: I think the most important thing I convey to them is to look for what, or who is missing, and then [encourage them to ask] why?

UP: What advice would you give to fellow teachers who are struggling to teach Thanksgiving?

GM: I would say to look into what you teach now and ask the same question I hope my students start to ask: Whose perspective is being told, and whose is being left out?