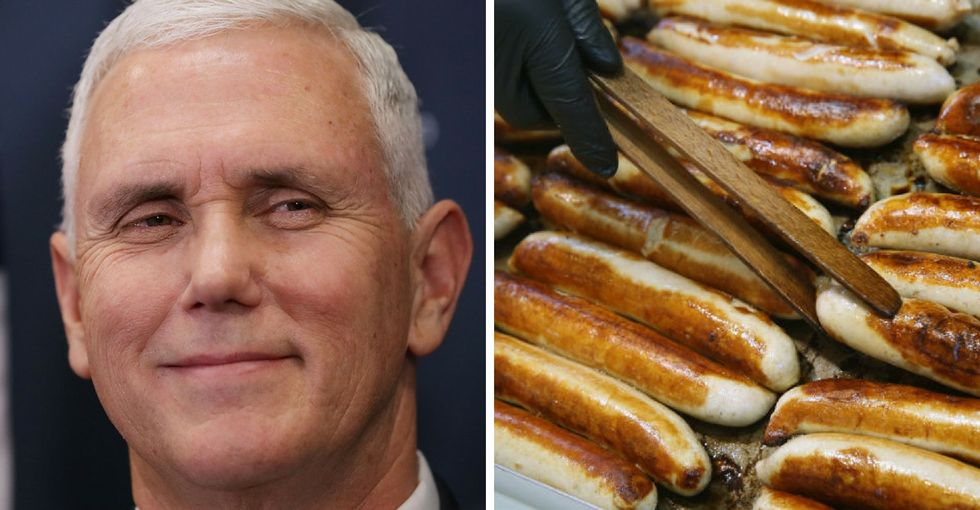 Mike Pence said he plans to be in Kansas City, Missouri, on July 11 to boast about the GOP's tax law that largely benefits the 1%.

Not so coincidentally, a "sausage fest" was planned to take place in Kansas City the same day — right across the street.

Yeah, people are (literally) cooking up some good old-fashioned trolling of the vice president.

Local radio station 96.5 The Buzz is throwing "The Mike Pence Sausage Fest" and giving away free hot dogs at Barney Allis Plaza — right across the street from the downtown Marriott hotel where Pence is scheduled to speak.

"Pence is no fan of the LGBTQ+ community," the station tweeted on July 9. "And we’re no fan of his."

It's admittedly pretty fun to troll Pence when it comes to LGBTQ issues.

Lots of others have done it.

His neighbor in Colorado hung a "Make America Gay Again" rainbow flag on a pillar near the VP's driveway in January. In March, John Oliver published a kids' book, "A Day in the Life of Marlon Bundo," telling the tale of Pence's supposedly gay rabbit (proceeds benefitted an LGBTQ nonprofit).

In January 2017, when then-vice-president-elect Pence was making the leap from Indiana to Washington, LGBTQ advocates threw a "queer dance party" outside his temporary residence near D.C. (I'm not sure what would be more fun: free hot dogs or a #Resistance block party?)

Laughs aside, though, Pence's egregious history on queer issues is downright scary.

At one point, Pence supported gay conversion therapy — a fact he wholeheartedly disputes to this day despite evidence to the contrary.

As governor, Pence effectively legalized discrimination against LGBTQ patrons in Indiana businesses with his religious freedom law. (Backlash to the draconian legislation was so swift, Pence was forced to carve out an amendment clarifying that the law couldn't be used to target the LGBTQ community.)

In the past, he's fought marriage equality, criticized the repeal of "Don't Ask, Don't Tell," and slammed the Obama administration for passing guidelines to protect transgender students in school.

For LGBTQ people and their allies, Pence may be the perfect motivation to throw a sausage fest — but he's still nothing short of a nightmare.

Learn more about and support LGBTQ groups — like GLSEN, Lambda Legal, The Human Rights Campaign, GLAAD, The Trevor Project, and others — fighting back against the Trump-Pence administration's attacks on queer people and protecting those who are most vulnerable along the way.