A gay Chechen man explains what it's like being at the center of a human rights atrocity. 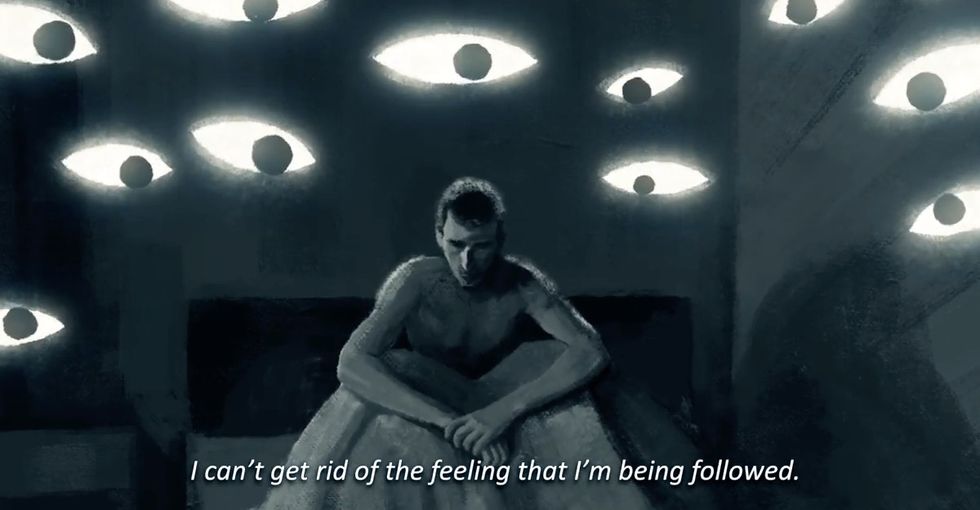 A startling new report from the Russian LGBT Network highlights just how bad the crackdown on gay, lesbian, and bisexual people in Chechnya has gotten in recent months. As the reported number of people who've been detained or killed for suspicion of being LGBTQ skyrockets, it's hard to know what can be done to help. Making matters worse, details are few and far between, with even the new Russian LGBT Network report admitting it's hard to understand the full scope of the assault for certain.

What we do have are stories, like the one a gay Chechen man shared at Meduza back in April, which comes to life in a haunting new video.

Titled "Unable to breathe," the animated short follows the unnamed man as he's arrested for suspicion of homosexuality, physically and mentally tortured for a week without food or water, and eventually flees the country, forced to leave his family behind. (The subtitles are a bit small, so you may want to watch this full screen.)

"They beat me for several hours straight. They broke my ribs. They used electricity to torture me — they have this special coil and metallic pegs. In the neighboring rooms, people were also interrogated and tortured. I could hear their screams. The policemen wanted me to confess to being gay and to snitch on my friends, but I didn’t break."

The story takes a number of horrifying turns, but perhaps the most disturbing aspect is the portion where he reveals that the Chechen government wants families to murder their gay relatives.

"One of my relatives participates in 'gay-hunts'," he says in the video. "He does not suspect me, so he told me that the police have already arrested about 200 people. The police are blackmailing their families, threatening the relatives with dishonor. They are forcing the families to 'take care' of them. It means to kill. If they don’t do it, the police will. I don’t know what to do."

This assault on LGBTQ individuals is a human rights atrocity, and we cannot remain silent.

Some have spoken up — including Senator Marco Rubio (R-Florida), 50 members of the House of Representatives, U.S. ambassador to the United Nations Nikki Haley, former Vice President Joe Biden, and others. Still, many of the most powerful people in the world — such as President Trump and Vice President Pence — have remained silent in the face of this terrible campaign.

That's why it's so important that we don't allow stories like these to just fade into the background. We must keep them front of mind, and sharing the stories of those most affected by this barbaric treatment is one very important way to do that.