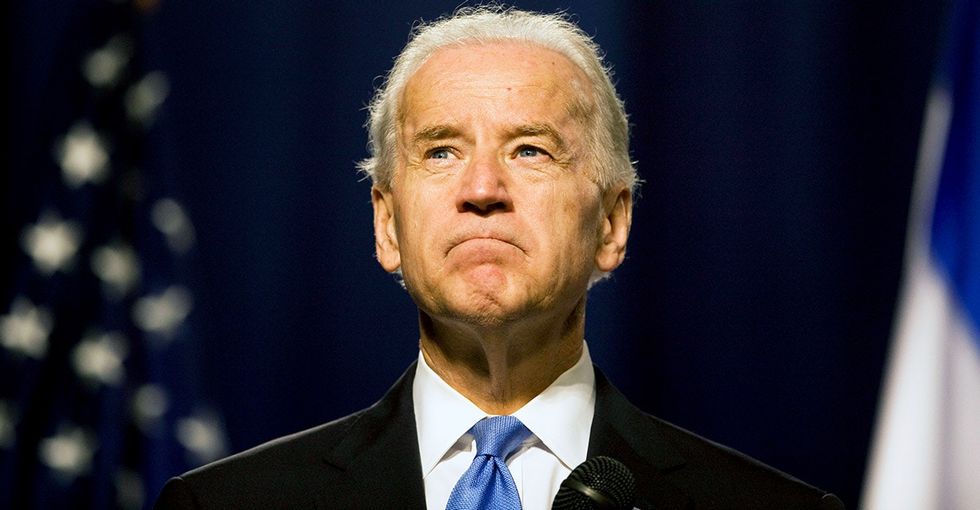 Amid the chaos, Joe Biden doesn't want us to forget about protecting and expanding LGBTQ rights — at home and overseas.

In a powerful op-ed in The Washington Post published May 16, 2017, Biden pleads with Americans to stay informed on the perils faced by LGBTQ people abroad.

In the article, written in recognition of International Day Against Homophobia, Transphobia, and Biphobia, Biden notes the progress celebrated (and setbacks faced) by LGBTQ Americans. But the former vice president chose to focus the piece on the persecution of LGBTQ people in places like Syria, Uganda, and — most notably — Chechnya.

"In Syria and Iraq, LGBT individuals face terror and torture, often at the hands of the Islamic State. Countries such as Russia — where appalling reports recently surfaced that authorities in Chechnya were imprisoning and torturing individuals believed to be gay or bisexual — Uganda and Tanzania continue to be openly hostile to LGBT people, and their political leaders have used anti-American sentiment to fuel anti-LGBT hate. And in many parts of the world, the horrific assault of 'corrective rape' is used as an extreme form of conversion therapy to try to turn women straight."

As Biden mentioned, more than a hundred Chechen men suspected of "nontraditional" sexual practices have quietly been arrested and held in what some reports describe as modern-day concentration camps.

Weeks have gone by since news of the atrocities began trickling out of Chechnya, a semi-independent state of Russia. Yet many world leaders, including President Donald Trump, have not publicly condemned the actions. On May 17, 2017, BuzzFeed News reported the U.S. is denying visas for Chechen men escaping persecution.

Biden went on to note cultural differences are never an excuse for human rights violations:

"Many times, this kind of discrimination, harassment and violence is justified in the name of 'culture.' This offensive argument ignores the fundamental truth that LGBT rights are human rights. Prejudice is prejudice; inhumanity is inhumanity. Using religion or culture to license discrimination and demonizing LGBT individuals to score political points are no more justifiable around the world than they are here at home."

Biden was a longtime proponent of LGBTQ rights as a senator and vice president. Now that he's out of office, he clearly doesn't want us becoming complacent.

Here's what you can you can do to keep progress pushing onward:

"Together, we will work to defend and advance the human rights of all people, and we will not rest until equality, at home and around the world, is fully realized," Biden wrote.

"Until then, to all those suffering discrimination and violence simply because of who they are or whom they love, know this: The American people are on your side."