Marco Rubio comes to the defense of gay men in Chechnya in a fiery speech.

'We should never, ever tolerate human rights violations against any person for their political views, their religious beliefs, or their sexual orientation.' 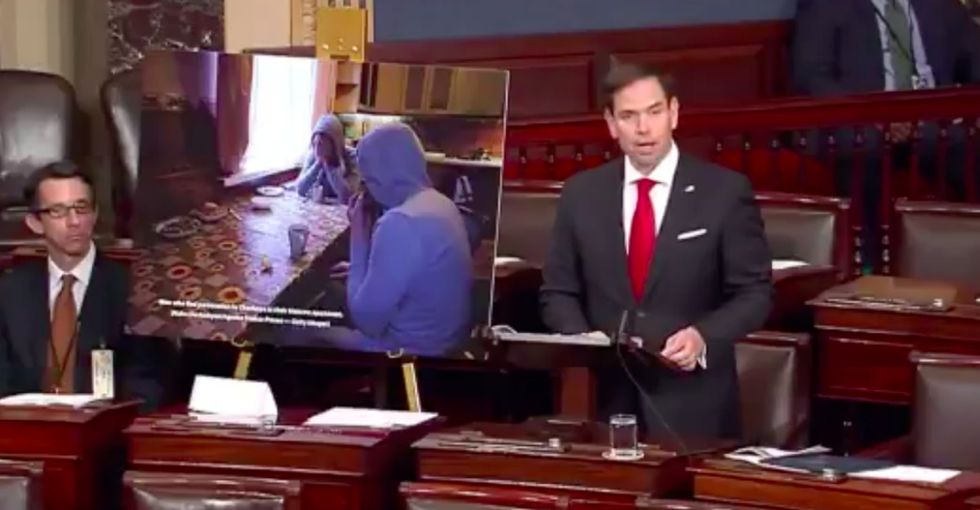 Marco Rubio surprised everyone when he took a stand for LGBTQ rights.

On April 24, 2017, the Florida Republican — who's been panned by human rights groups in the U.S. for his anti-LGBTQ stances on various issues, including marriage equality and same-sex adoption — used his time on the Senate floor to blast Chechen President Ramzan Kadyrov for the republic's heinous acts against gay and bisexual men.

The speech makes Rubio the first senator (Republican or otherwise) to use the spotlight of the Senate floor to call out the inexcusable violations of human rights in Chechnya, which is part of the Russian federation.

A Russian newspaper reported earlier this month that Chechnya law enforcement had quietly detained at least 100 men with "nontraditional" sexual orientations and has since starved, tortured, and even killed multiple victims.

“Unfortunately this is not a new reality for those living under the brutal tyranny of the Chechen leader, who, by the way, happens to be a loyal ally of Vladimir Putin," Rubio told his fellow senators.

"There have been reports in the past of similar abuses, although these reports seem to be the most brutal and should provoke anger in all of us. We should never, ever tolerate human rights violations against any person for their political views, their religious beliefs, or their sexual orientation.”

Since the first explosive report from a Moscow newspaper covering the abuses went viral, more disturbing information has trickled out of Chechnya. Several prisons have been created explicitly to detain gay and bisexual men, authorities refuse to publicly acknowledge LGBTQ people even exist in their republic, and one British leader alleged he's heard that Chechen authorities hope to "eliminate" its gay population by the end of May.

“The United States and other responsible nations should do more to ensure that all people are protected, and those who harm them are held responsible," Rubio concluded. "We should use our voice on the global stage to call attention to these horrifying acts and to ensure that they are condemned in an appropriate way, and ultimately in the hopes that they will be stopped.”

Watch a clip of Rubio's speech below: