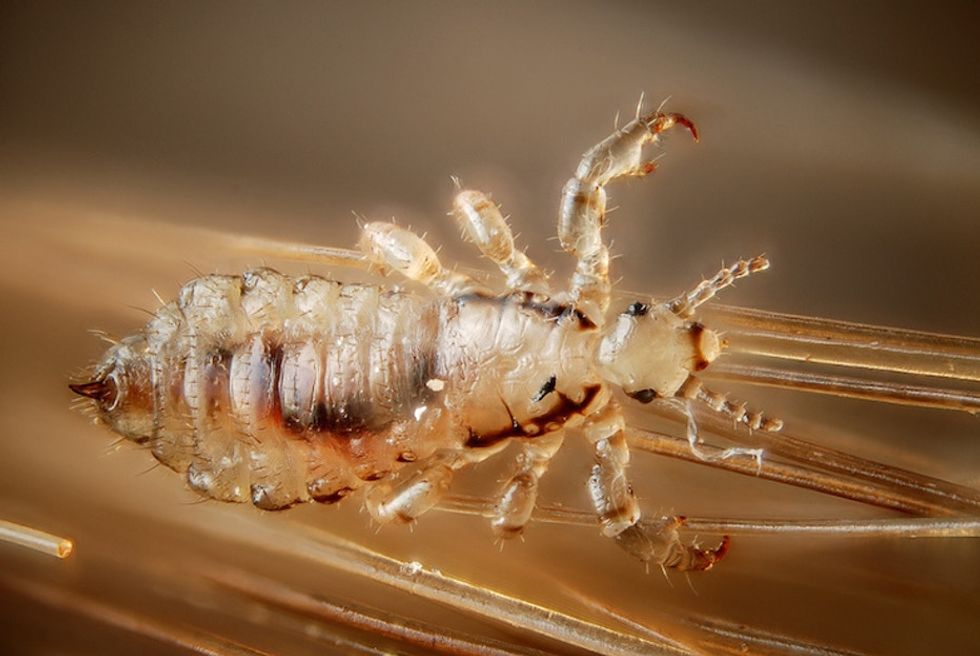 "Mutant lice" are spreading across the country. Apparently, we're all doomed.

They supposedly look something like this. GIF from "20 Million Miles to Earth"

Somewhere between 6 and 12 million kids get lice every year in the U.S., and now we have even more reason to get the heebie-jeebies.

Researchers from Southern Illinois University Edwardsville just announced that in at least 25 U.S. states, they've found lice that are resistant to over-the-counter treatments.

For parents in the thick of the back-to-school rat race, that's alarming news. My own daughter just started daycare a few weeks ago, and my first urge was to immediately shave her head and barricade our family in an underground bunker.

But after doing some digging, I'm not quite as freaked out about this epidemic. And you shouldn't be either.

Here are five things you should really know about the "mutant lice" outbreak before you do anything rash.

OK, so here's what lice are: They're tiny six-legged bugs, usually two to three millimeters long, that live and lay eggs in human hair.

Over time, yes, lice seem to have developed a resistance to common treatments, which is actually a really normal thing that happens all the time. It just means that the odd lice who just so happen to be immune to our pesticides have a better chance of surviving than their peers, so eventually they become more prevalent.

Sure, the term "mutant" is technically accurate because we're talking about gene mutations, but let's be real — these bugs didn't stroll through a puddle of primordial ooze and grow enormous fangs overnight.

2. Lice may be immune to certain over-the-counter treatments, but there are other options.

You are also free to try whatever this is. Photo by zoomar/Flickr

Most nonprescription lice treatments use chemicals called permethrin and pyrethrin, which are supposed to paralyze and then kill the bugs. The experts are saying that most of this stuff won't work as well as it used to.

But don't worry! Shaving your kid's head isn't the only solution.

The first thing you can do is try higher doses of the standard lice treatments like Nix and Rid. You can also try things like wet combing (apparently vigorous dry combing can send lice airborne via static electricity ... aaaand now you're picturing a bug riding a lightning bolt across the sky) or you can suffocate the lice with an overnight mayonnaise bath (which sounds like it might actually be worse than actually having lice).

If things get really bad, you can get a prescription from a pediatrician for a treatment that uses different chemicals that might be more effective.

CNN writes that these alternatives "would not be a lasting fix" because eventually lice that are naturally immune to those would start to take over the population. But do we care? Pretty sure we just want these creatures off our kids' heads, like, yesterday.

If you get desperate enough, you can actually hire someone to manually comb and pick the lice from your kid's hair. They might first try to drown the lice with olive oil, and then they'll comb out the live ones and pick the eggs (called "nits") with their fingers ... which can take several hours.

Monkeys have had it figured out for a while. GIF from WildFilmsIndia/YouTube

Be wary though, a report from the American Academy of Pediatrics warns that the nits, or eggs, aren't necessarily much to worry about. If you've treated and removed the live lice, the infestation is unlikely to spread.

There is a small chance that the lice will come back if there are enough eggs left behind, though. Plus, some nitpickers will even teach you how to delouse your kid's hair yourself next time.

Whether it's worth the money is up to you, and how long your kid can sit still.

4. This is important: Don't freak out!

OK, I'm going to show you a picture of an actual louse. Are you ready? Seriously, try to hold it together.

OK, phew. We got it over with.

Hate to break it to you, but by the time your kid starts scratching their head, they probably already had lice for four to six weeks.

As horrifying as these things look, your kid isn't in danger and doesn't pose much of a threat to spread lice to others.

Again, lice are pretty much harmless. They aren't known to spread disease or cause significant physical damage. So while they make us squirm and itch, they aren't necessarily a true emergency.

Just don't share a hat or a pillow with him until you know the lice are gone.

5. Kids shouldn't be excluded from activities for having lice.

C'mon, let this kid go out and play! Photo by Juhan Sonin/Flickr

Lice can't fly or jump, so outside of riding waves of static electricity through the air, they really only spread via direct contact, like two kids literally rubbing their heads together (crazier things than that happen at school, I'm sure).

In fact, that's the reason lice seem to gravitate toward kids rather than adults; they're always up in each other's personal space, and it gives the lice plenty of opportunities to travel.

Some schools have a "No-Nit Policy," which means kids with lice can't come back into the classroom until all the eggs are gone from their hair. But we already know that having a few residual eggs likely isn't enough to cause further spreading, which is why, according to the CDC, both the American Association of Pediatrics and the National Association of School Nurses believe these policies should be discontinued.

Having lice as a kid probably really sucks; let's not make them feel even worse about it by shunning them from society.

There, don't you feel better? I know I do.