Yes, wealthy black Americans experience racism and get to protest. Here's why.

We shouldn't even have to talk about this, but here we are. 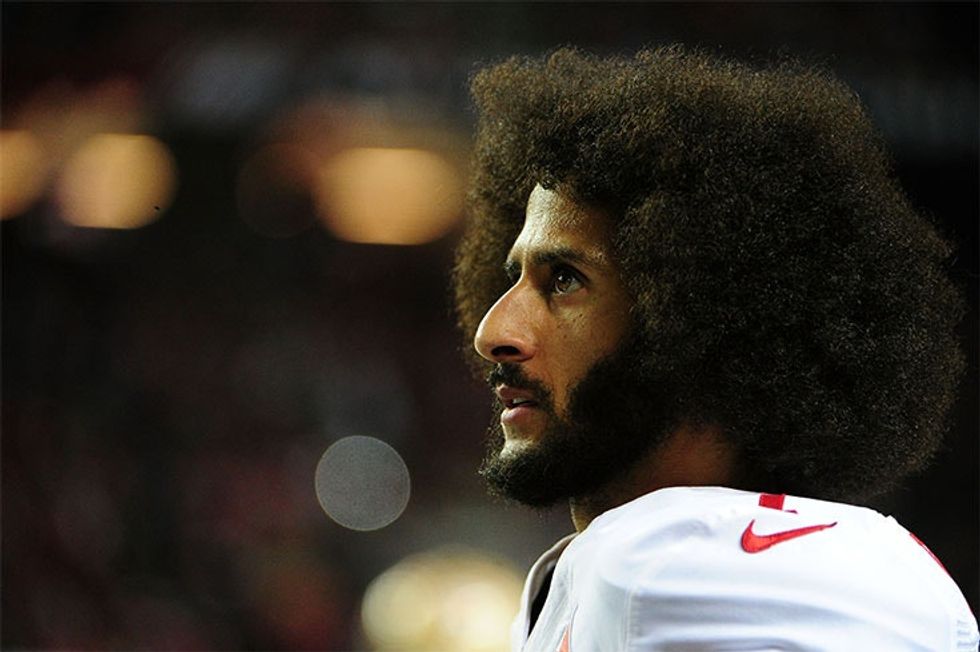 Colin Kaepernick, still unemployed and blacklisted by the NFL, has received a range of critiques from sports pundits, Twitter users, and the NFL audience for using his platform as a famous athlete to speak out against police brutality.

There is a problematic line of thought that continues to resurface in these conversations: Black Americans who are wealthy or noted intellects — so-called "privileged" black Americans — have no business talking about the reality of race.

In case anybody was wondering what black oppression looks like to #ColinKaepernick https://t.co/YIHeJ7Wtns
— DEPLORABLE DANI (@DEPLORABLE DANI)1472486195.0

It's a familiar critique. When Beyoncé used her Super Bowl 50 performance to pay homage to the Black Panthers, critics went wild. Not only did they inaccurately equate the Black Panthers to a terrorist group, they couldn’t fathom how a wealthy black woman could feel the need, much less have the desire, to comment on racist practices through art.

Often criticized for not speaking more directly about race, President Barack Obama also faced an insurmountable amount of racist attacks and vitriol in office. Yet, when he did speak on fraught relationship between law enforcement and the communities they serve, pundits lashed out him for "dividing the nation."

The idea that a black person gaining privilege means they then relinquish First Amendment rights is a racist, dangerous fallacy. And it's about as un-American as it gets.

Acquiring wealth, becoming educated, or reaching a higher societal class should not require black people to abdicate their right to speak about their experiences and to speak for disenfranchised communities.

Conflating prosperity with freedom is not only false, it indicates that laws that give Americans freedom of speech — and the right to protest — only apply to certain groups. When we do that, we invoke classism, racism, and silence marginalized voices. Black people from all groups — wealthy or poor, famous or unknown, young or senior — have all been criticized at various points in history for speaking on injustice and black experiences. Perhaps it’s not the status that bothers these pundits, but rather the skin tone of those speaking out and their audacity to do so unapologetically.

The nation’s history with attacking privileged advocates for justice is lengthy.

Booker T. Washington, a black scholar and leader, spent his life fighting racism and injustice and working to change a lynch-hungry South. He died with more than $1.5 million in his estate and used his finances to fight inequality and increase educational opportunities for black America. Madam C.J. Walker became more vocal about race and injustice as her wealth grew and she raised money for organizations like the YMCA and the NAACP’s anti-lynching campaign. Martin Luther King Jr. was one of the most educated, well-known leaders of our time, a Nobel Peace Prize winner, a globally known pastor, and was assassinated at 39. Oprah, one of the wealthiest women in recent history, wasn’t able to buy a handbag in Switzerland because the shop owner thought she couldn’t afford it. Despite this experience and others like it, she has worked tirelessly to amplify the work of black film directors, writers, and artists.

Their privilege does not eliminate that experience. In using their platforms, well-known voices have the power to do meaningful acts in struggling communities and to be role models for young activists, writers, and thinkers.

By allowing black leaders to be human and to speak out against injustice, we make space for people who regularly experience racist practices and injustices and may not have the funds to create an organization or the access to education usually required to hold office. We give a voice to the women who were sexually assaulted or raped by a police officer and weren’t believed until years later. We give a voice and value to the professor stopped on the way home for being a black male in the "wrong" neighborhood. We give a voice and value to the countless number of black teens followed around in stores in malls because they’re immediately seen as threats or as humans that need to be disciplined because of their skin.

Black people have a right to practice their American freedoms. It's time America listens to them.