Why did scientists give a mirror to these weird fish? We have 5 ideas. 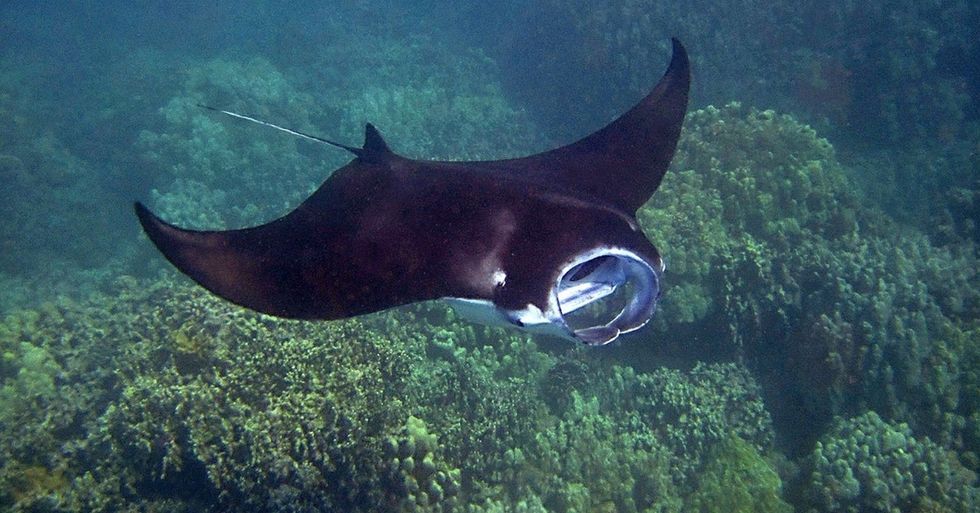 "Mirror, mirror, under waves — who's the fairest manta ray?"

That ray, you see, is circling around a mirror placed in its tank by Csilla Ari, a researcher at the University of South Florida in Tampa.

Ari filmed a pair of these aquatic blanket-creatures on two separate occasions: once with a mirror in their tank and once without. She observed a noticeable difference in the behaviors of these typically antisocial animals in the presence of their own reflections.

They would blow bubbles while facing the mirror, for example, or wave their fins around and swim circles past the looking glass, like in the GIF above. But as fun as it is to spend an afternoon watching fish act funny, this strange little experiment still begged the question: Why would a manta ray care about a mirror?

It turns out, there are actually a few possibilities:

1. They were just making sure they're not a vampire or monster.

It's a commonly accepted scientific fact that evil mystical folk creatures don't have reflections — and once upon a time, people treated the so-called "devil ray" like monsters. There were stories of these flappy fish using their prodigious size to sink ships, and they gained a (completely fabricated) reputation for attacking humans. They even starred in a couple of monster movies, like "The Sea Bat (1930)" and "Devil Monster (1936)" — though sadly, none of them left their fin-prints on the Hollywood Walk of Fame.

While manta rays can get pretty big — some are more than 20 feet across — they're not actually that dangerous in real life (and they're definitely not demonic).

2. Or they were checking to see if they had anything in their teeth.

So if manta rays aren't man-eating monsters, what do they eat? It turns out, they're really into those teeny tiny floating plants and animals we call plankton — so basically the opposite of human flesh. In fact, the ray's iconic horns are actually fins on the sides of their head that help them funnel plankton into their mouths!

3. Perhaps they wanted to admire how smart they look.

Manta rays have the biggest brains for their bodies of any fish. There are even some stories of rays coordinating and cooperating with each other (even though they generally keep to themselves).

Intelligence is beautiful, so maybe these rays were just taking in the sights?

Woohoo! We're smart! Let's have a flap party about it! GIF from BBC Earth.

4. They could have also been looking for gray hairs.

The manta ray as we know it today has been around for about 5 million years, and its relatives date back around 20 million years. And they're not just an old family either — individual rays can live to be 50 years old! (Which is, like, really old for a fish.)

5. Or maybe, just maybe, these manta rays got so excited by the mirror because their advanced intelligence make them self-aware.

The mirror test is a kind-of-vaguely-defined lowest-bar litmus test for determining if animals possess a higher consciousness like humans. The basic idea is that if an animal can recognize itself in a mirror (instead of, say, confusing its own reflection for another member of its species), then that animal must be at least somewhat aware of its own identity.

Other animals that have passed the mirror test include dolphins, chimpanzees, elephants, and magpies. It's only a tentative step, and it may not work for nonvisual animals like octopuses, for example (which lots of us already recognize as a vastly superior alien race). But if the manta rays in the experiment above did actually recognize their own reflections, it would make them the first fish to demonstrate self-awareness.

Of course, we can't exactly prove these manta rays are really as vain as we think they are ... at least, not yet.

But if this research checks out, it has the potential to be an ocean-sized milestone in our larger understanding of consciousness and evolution. Which means we're one step closer to being able to swim up to a manta and say, "Hey, who's that handsome devil ray in the mirror?"

And I think we're all agreed: That would be awesome.