Why Anne Hathaway's body-positive pic of her baby bump deserves a Like.

'So, posting a bikini pic is a little out of character for me...' 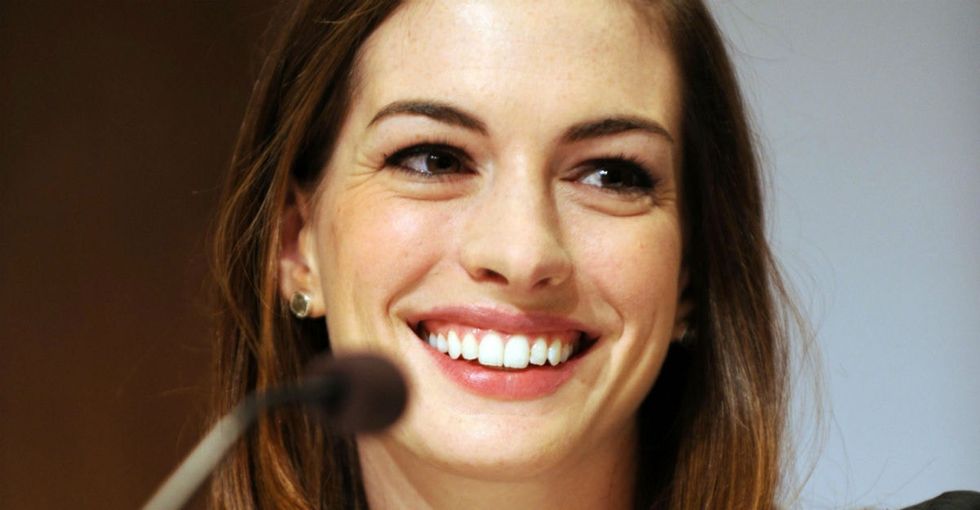 This is Anne Hathaway. And in case you're not up to speed on all the celeb gossip, you should know: She's pregnant!

The thing with being pregnant and famous, though, is that your body suddenly becomes a thing that really makes headlines.

Even more so than when you're not pregnant. (It's almost as if the world has never seen a pregnant woman before!)

So, when Hathaway was splashing around on a warm beach over the holidays, she decided to take this whole tabloid-driven obsession over pregnant celebrities thing and flip it on its head.

Because it's her body and pregnancy, after all.

She shared a photo on Instagram showing off her baby bump and rocking a red bikini, accompanied with a caption that slammed the paparazzi trying to snap a pic without her consent:

Here's the caption in full:

Happy 2016 to my beautiful Instafriends! So, posting a bikini pic is a little out of character for me, but just now while I was at the beach I noticed I was being photographed. I figure if this kind of photo is going to be out in the world it should at least be an image that makes me happy (and be one that was taken with my consent. And with a filter :) Wishing you love, light and blessings for the year ahead!

The pic gets at two important things: consent in the world of celebrity culture, and what it means to have a bikini body.

Yes, Hathaway is famous. She's won an Oscar. She's starred in (multiple) blockbusters. The 33-year-old has been a household name for years.

But she's still a human being. Snapping private pics of her in a swimming suit in order to sell magazine copies without her approval? Not cool — regardless of her fame.

Hathaway's photo also serves as a reminder that there is not just one type of "bikini body." If it's a body and it has a bikini on it, it is — by definition — a bikini body.

It's a topic Women's Health magazine just re-examined in terms of its own editorial coverage. The outlet, deciding the term "bikini body" probably does more harm than good, has banned the phrase from their covers moving forward.

“We want to always empower women, not make them feel bad about themselves,” Editor-in-Chief Amy Keller Laird told Newsweek.

Of course, one could argue that choosing to celebrate diverse bikini bodies on the magazine's covers would probably do more good than simply banning one term while continuing to highlight a traditional thin "bikini body." But the thought is nice, and it's a welcome one.

Kudos to Hathaway for feeling comfortable in her own skin and refusing to let some tabloid photographer exploit her holiday fun.

It was the perfect way to kick off a healthy, happy 2016 (with a spot-on choice for an Instagram filter, of course).