Why activists are joining forces to bail black mothers out of jail. 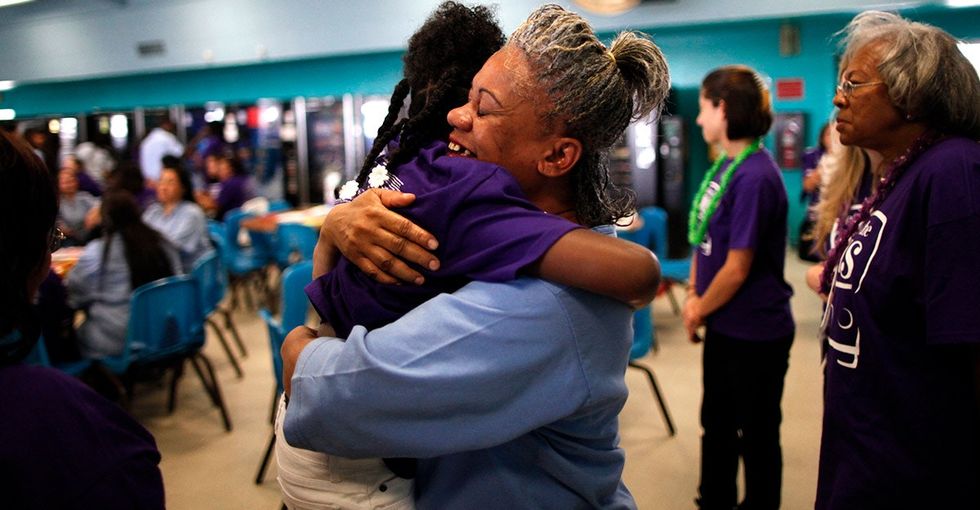 This week, more than 30 black women from across the country will receive the best Mother's Day gift of all: freedom.

They are among the more than half a million people (20% of the U.S. prison population) currently sitting in jail cells who have not been convicted of a crime, largely due to their inability to make bail. Some of these people are left to languish behind bars for days, weeks, months, and even years simply because they're poor.

Black women make up 44% of the female jail population though they are only 13% of the U.S. female population. Mass incarceration is devastating regardless of gender, but women are more likely to be primary caregivers, so many of these locked cells represent families torn apart.

A woman hugs her daughter at the California Institute for Women state prison. Photo by Lucy Nicholson/Reuters.

Thankfully, people across the country are joining forces to do something about this miscarriage of justice.

Mama's Bail Out Day is a coordinated effort to bail black women out of local jails while they await trial.

It's a practice that dates back to the era of American slavery, when black people would pool their resources together to buy each other's freedom.

More than a dozen organizations, including Black Alliance for Just Immigration, Color of Change, Southerners on New Ground (SONG), and local Black Lives Matter groups, came together to bring this idea to life, launching a nationwide online crowdfunding effort to buy freedom for these women and coordinating days of action against the bail system.

Pre-trial detention substantially increases the likelihood criminal conviction, mostly through the increase in guilty pleas to avoid even more time in jail. These convictions can have lasting effects on future employment, housing, and custody.

Ensuring these women can pay bail means families can stay together and black women get a better shot at justice. At home, there are more goodnight kisses. Fewer days of lost wages. More food on the table. There are no limits to the positive ripples that roll off this simple action.

A woman hugs her daughter at California Institute for Women state prison. Photo by Lucy Nicholson/Reuters.

So far, more than $250,000 has been raised for bail money, reuniting a small handful of women and their families.

These women will finally get to return to their communities, careers, and loved ones. It's a small step toward equal justice for black women, but for their families, it's absolutely everything.

"Whether it’s the mothers in the clubs who teach the young kids how to vogue, or the church mothers who took care of me," said Mary Hooks co-director of SONG, in an interview with The Nation. That's why Mama's Bail Out Day is intersectional, supporting queer, trans, disabled, immigrant, and non-traditional mothers; maternal care is not limited to one experience.

A mother and daughter wait to get visitors passes to see the girl's father at Folsom State Prison. Photo by Elijah Nouvelage/Reuters.

There's still time to contribute to the effort and give the gift of a second chance.

The system might not be set up to help these women, but we can.

Share the video, or if you're able, make a donation. Let's bring these mamas home and work to end the use of bail money for good.

An incarcerated mother hugs her children at California Institute for Women. Photo by Lucy Nicholson/Reuters.