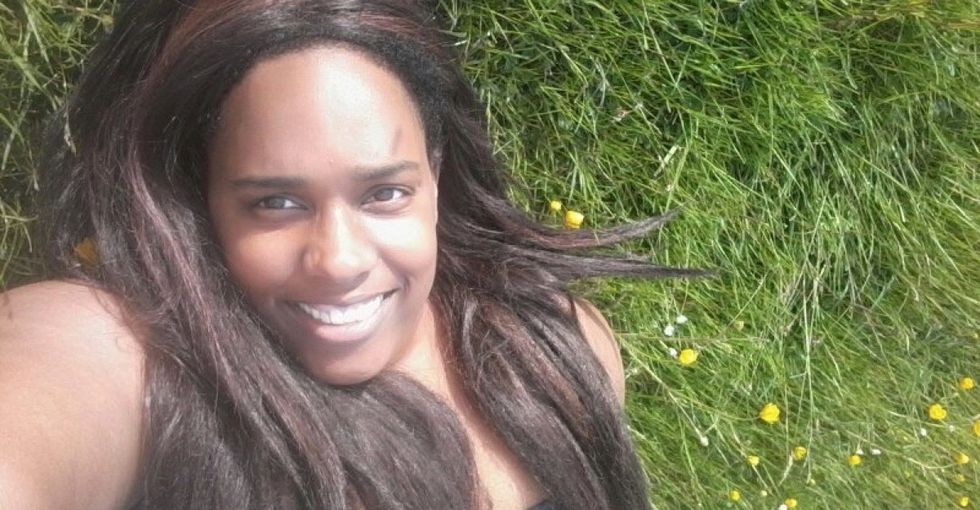 On Monday, Aug. 22, 2016, Michelle Marie became the official voice of Ireland — at least on social media — for the duration of a week.

Since 2012, the @Ireland Twitter account has featured a different person behind the handle every week, all of whom have some connection to Ireland or the Irish diaspora.

Each person has their own unique voice and perspective to offer to the account's 40,000-plus followers. And Michelle Marie, who normally tweets as @ChocCurvesModel, is certainly no exception:

Marie is a single mother and plus-sized model, as well as an immigrant from the U.K. She's also black, and, as she later disclosed, gay.

Unfortunately, there are still a handful of people in this world who can't fathom the idea that a fat, gay, black woman could live in Ireland, let alone be its voice for a week. And they wanted her to know — calling her "subhuman," saying that Ireland is only for the Irish, and telling her to leave the country and so on and so forth — in that monstrous way that only anonymous people on the internet are capable.

This is just a sampling of the hate that was out there; much of it was reported and deleted, although not before they were captured in screengrab perpetuity.

Sadly, this part shouldn't be surprising — though there is a certain irony to the fact that, according to their profiles, most of these racist trolls actually lived in the United States and thus almost certainly have no say in what does or does not constitute "Irish-ness."

Did I mention that was all just on her first day as the voice of @Ireland?

But as a dedicated champion of body positivity and self-love, Marie was determined to use the @Ireland platform to make her voice heard.

And it wasn't limited to racist vitriol, although those probably made up the bulk of it. There were also plenty of insults about her weight — which, sadly, is a frequent occurrence for plus-sized people. Fortunately, Marie was a pro and deftly shut down the haters:

Despite her relentless positivity, those few nasty voices still got to her— an experience familiar to anyone who's ever dealt with bullying. By the end of her first day as @Ireland, Marie had had enough.

I understood the @Ireland account to be a platform for all people who have an Irish connection of a grá [love] for the country/culture. [...] Many non-natives, non-residents, and persons of colour have gone before me on the account so I felt welcome to apply.

I expected trolls, and backlash, and criticism. But today I have experienced racism, sexism, fatphobia, and homophobia to a degree I have never known. I have had 8hrs of nonstop hate thrown at me. I am hurt, shocked, and appalled.

"I have become accustomed to a certain level of trolling online as it comes with the territory, but I have never known anything like what happened this week — a relentless barrage of extreme hatred and prejudice," Marie told Upworthy later that same week.

Perhaps even more inspiring were the droves of people who came to her defense and offered their support for her voice, and her continued presence on the Emerald Isle.

("Craic" is an Irish word that basically means "a good time.")

@ireland I'm so sorry there are so many idiots harassing you. They are really pathetic asses. #neanderthal's still walk the earth harassing
— Patricia Arquette (@Patricia Arquette)1471937202.0

Sure, Marie might not be the stereotypical poster child for the Emerald Isle. But, that's exactly why it's refreshing to have a voice like hers represent the country as part of a modern, global society.

Luckily, there were plenty of Irish citizens who seemed to agree.

Her legion of supporters were evidence not only of the Irish reputation for hospitality, but also that diversity and acceptance are both growing across the world.

Thanks to that support, Marie returned to the @Ireland Twitter account on Tuesday with a renewed energy.

And she continued to share her inspirational insights throughout the rest of the week.

"I have been really touched and taken aback by the level of kindness and support I have received," she said.

"The U.K. tends to turn a blind eye to the less favourable things that happen, whereas Ireland has stood up and spoken up against it. I feel Ireland is ready to embrace change and diversity."

Ireland, be proud. You've stood up against racism, come together to show unparalleled support, and shown the world the true Irish spirit.
— Ireland / Laoise (@Ireland / Laoise)1472073874.0

Of course, it wasn't all heavy social commentary. She also chatted with followers about their favorite places across the Emerald Isle and her appreciation for the Irish language and more personal subjects like body positivity, motherhood, and adoption.

This is why love & kindness are so important. It builds people up, strengthens & empowers, and fosters positive change.
— Ireland / Laoise (@Ireland / Laoise)1472138549.0

Our bodies are our forever homes. And regardless of their condition or size they deserve love, warmth, and care.
— Ireland / Laoise (@Ireland / Laoise)1472150701.0

As terrible as it was to watch someone like Marie suffer through so much hatred, the response that followed was a powerful reminder of why it matters that we continue hearing voices like hers.

After her whirlwind week as the voice of Ireland, Marie went back to tweeting and blogging about body positivity as well as helping to organize Ireland's first-ever Body Pride festival — proving that heroes come in all colors, shapes, and sizes.