When a poet can't answer standardized test questions about her own poems, kids are screwed. 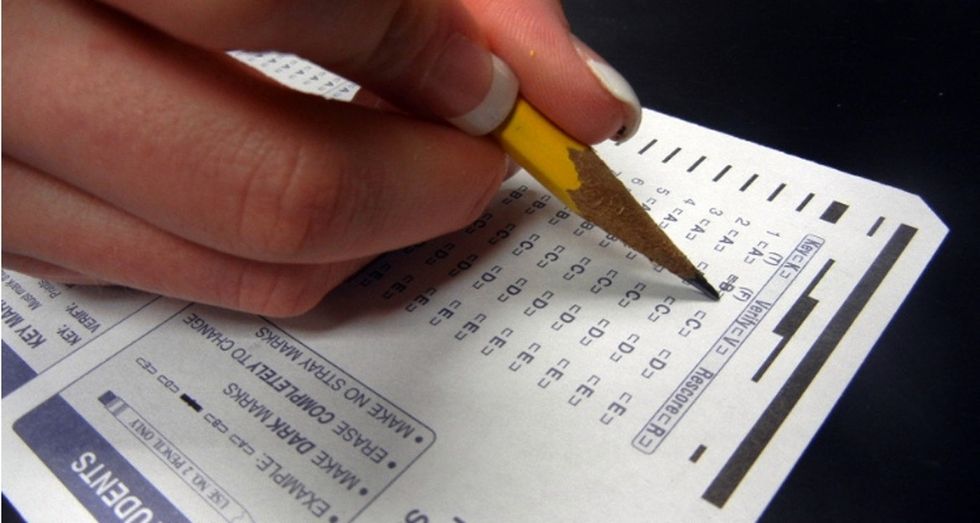 This poet's struggle with test questions analyzing her work verifies what many of us have long suspected.

For the record, I enjoy literary analysis. In fact, I loved studying literature and poetry in school so much that I became an English teacher myself.

However, there are elements of such studies that have never sat well with me.

Most of us learned to dissect poems and pick apart novels to find hidden meanings, process metaphors, and search for an author's intent and purpose in their work. And at some point, most of us have probably questioned whether or not those authors would agree with our overwrought assessments. Even I—someone who enjoys such analyses and have taught kids to do them—have wondered whether we sometimes push it too far.

TL; DR: Maybe our over-analysis of poetry and literature is kinda bunk.

Kids can develop valuable critical thinking skills through such exercises, but we veer toward the cliff when we start assigning correct and incorrect answers to them. Exploring different interpretations of a written work is one thing. Assigning a specific intent to a writer as if it's indisputable fact is entirely another—which is where the problem of standardized tests comes in.

Poet Sara Holbrook has had her poems analyzed not once, but twice, on standardized tests. She says it's b.s.

In 2017, Holbrook wrote an article for the HuffPost about her experience trying to answer questions about two of her poems that had shown up on a Texas standardized test.

One test question asked why she, the poet, had separated one of the poems into two stanzas. There were two major problems with the question: 1) The test makers mistakenly printed the poem without the stanza break, so there weren't two stanzas shown. And 2) None of the given answers were the actual reason Holbrook created a stanza break. She's a performance poet and she put the break where she paused when reciting the poem aloud. But no one asked her for her reasoning, and the real answer was not one of the test question options.

Another question asked why Holbrook used a certain simile. In answering the question herself, Holbrook says three of the four answers are correct—but only one is considered the right answer for the test makers.

This year, Holbrook faces yet another standardized test conundrum. In test prep materials from Mentoring Minds, LP, her 40-word poem titled "Walking on the Boundaries of Change" has a whopping eight questions associated with it.

Peter Greene, who interviewed Holbrook for Forbes and has seen the test prep booklet, wrote, "once again, the questions turn on the issue of word choice, central message, and which part of the poem does things 'best,' all of which hinge on the test taker's interpretation of the poet's intent. And all are multiple choice questions with four possible answers, the kind of test structure that, Holbrook says, causes 'students to grow up believing the right interpretation of anything is out there on the internet, and to discredit their own thoughts.'"

How are kids supposed to stand a chance in this reality? How does a love of literature survive such a boxing in?

Holbrook advises that educators and parents stop putting any stock in the "nonsense" these tests perpetuate.

Standardized tests can be appropriate measurement tools for objective knowledge, such as math or science or the structure of language. But the craft of writing does not lend itself well to right or wrong, one-correct-answer assessments—especially when they try to assume a writer's intent without even consulting the writer themselves.

Such tests can cause real harm to kids, especially—and perhaps ironically—those who instinctively understand the nuances and intricacies of poetry and literature. These tests are a quick way to suck the love of learning right out of intelligent, thinking students.

Holbrook told Greene that there are several solutions to this issue:

"Parents, demand to see the test prep materials. Teachers, don't waste time on test prep: you can't teach nonsense. Administrators, take the money you are spending on test prep and spend it on classroom libraries instead. There are no quick fixes. Kids need to read and write voluminously...If a bike helmet fails to protect a child from injury, consumers can sue the manufacturer. These tests are injurious, but shrouded in secrecy and thereby beyond the reach of most teachers and all parents."

As Holbrook wrote in her HuffPost article:

"The only way to stop this nonsense is for parents to stand up and say, no more. No more will I let my kid be judged by random questions scored by slackers from Craigslist while I pay increased taxes for results that could just as easily have been predicted by an algorithm. That’s not education, that’s idiotic."

The Sam Vimes "Boots" Theory of Socioeconomic Unfairness explains one way the rich get richer.

Any time conversations about wealth and poverty come up, people inevitably start talking about boots.

The standard phrase that comes up is "pull yourself up by your bootstraps," which is usually shorthand for "work harder and don't ask for or expect help." (The fact that the phrase was originally used sarcastically because pulling oneself up by one's bootstraps is literally, physically impossible is rarely acknowledged, but c'est la vie.) The idea that people who build wealth do so because they individually work harder than poor people is baked into the American consciousness and wrapped up in the ideal of the American dream.

A different take on boots and building wealth, however, paints a more accurate picture of what it takes to get out of poverty.

Chatty animals get 'interviewed' with a teeny tiny microphone, and boy is it entertaining