What you should know about the historic Native American battle happening now. 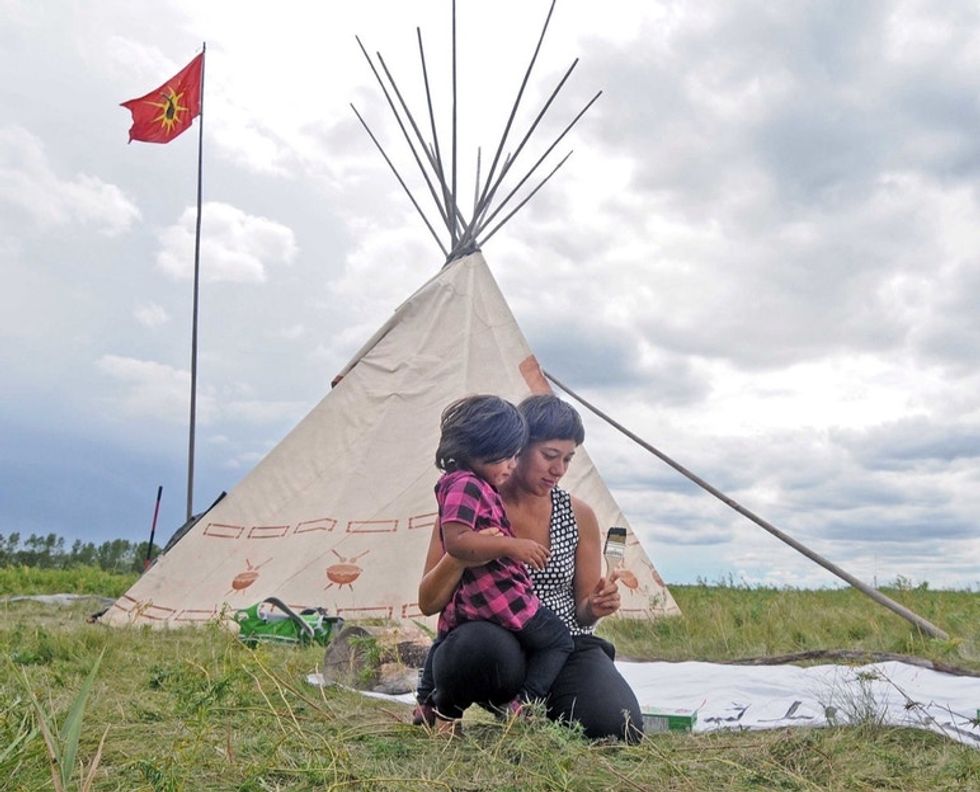 It's the summer of 2016, and thousands of American Indians from the northern Great Plains just came together to protect their sacred land ... again.

If this scene sounds familiar, that's because it is. During the Great Sioux War of 1876, a united legion of Lakota Sioux, Northern Cheyenne, and Arapaho stood their ground near a river against a U.S. Army regiment led by Col. George A. Custer. American Indians called it the Battle of Greasy Grass or Victory Day, but U.S. history books tend to remember the Battle of the Little Bighorn as Custer's Last Stand.

The Dakota Access Pipeline is a proposed $3.7 billion project, spanning more than a thousand miles from North Dakota to Illinois. If completed, it would be the largest crude oil line in the region — just seven miles shorter than the failed Keystone XL project — with the capacity to transport nearly half a million barrels of oil a day.

The pipeline was originally going to cross the Missouri River just north of Bismarck. But North Dakota citizens were worried about the potential damage to their water supply, so the pipeline was rerouted.

Under the new plan, the pipeline would cross the river less than one mile upstream of the Standing Rock Sioux reservation.

Never mind the fact that the United States has abused and pushed American Indians onto reservations that represent just a fraction of their ancestral property. Nearly half of the 9,000 people living on that 3,500-square-mile reservation live in poverty today.

They all rely on the river's water for nourishment and survival, not to mention its cultural and religious importance. Construction of the pipeline would also disturb sacred grounds and burial sites in the area.

"Our state of being is not our fault. ... And now again, even what little we have left is under attack," Standing Rock Sioux Tribe Chairman Dave Archambault II said in a statement. "To poison the water, is to poison the substance of life. Everything that moves must have water."

"This pipeline’s construction is being carried out without the Tribe’s free, prior and informed consent," the tribal council wrote in an appeal to the United Nations Human Rights Council.

The Standing Rock Sioux, along with other tribes in the area, first tried to file a lawsuit against the U.S. Army Corps of Engineers. They also collected more than 200,000 petition signatures demanding an end to the construction.

When the petition didn't work, the Standing Rock Sioux turned to the United Nations for help, citing human rights violations infringing on the U.N. Declaration on the Rights of Indigenous Peoples.

Legal processes take time, however. So while the tribes were granted a hearing in Washington, D.C., their court date wasn't scheduled until Aug. 24 — two weeks after construction was slated to begin.

Despite the Standing Rock Sioux's best efforts, ground was broken on the Dakota Access Pipeline on Aug. 10.

But that was about as far as the project got.

The Standing Rock Sioux decided to protest. It started as a small prayer camp of about 50 people, some of whom had been there since April.

Within a week of the project's groundbreaking, the Sacred Stone Camp near Cannon Ball, North Dakota, had swelled to more than 1,000 protesters, including members of more than 80 tribes from across the country, along with other non-Native activists. By the time the court date rolled around, estimates of the protesters' numbers rose as high as 4,000.

The company behind the pipeline was, obviously, less than thrilled. At first, it sought a restraining order to quell the demonstration, but eventually it agreed to halt the project until the court decision could be made.

As inspiring as it is to see so many people come together to help protect the planet, the state's response to the halted project was ... less than great.

The closest the protest ever came to conflict were a few traditional mock charges performed on horseback to hold back the police line. But no violence occurred.

Unfortunately, this was not enough to sate the concerns of the police and other authorities, who, protesters say, mistook their sacred ceremonial pipes for pipe bombs, and alleged that a protester shined a laser pointer at a surveillance aircraft that was flying overhead, among over accusations.

More than 20 arrests were made, and North Dakota state officials used emergency relief funds to remove drinking water and other resources from the protest site.

By the time the federal court date rolled around on Aug. 24, another protest movement had formed in Washington, D.C.

The court session ultimately ended with no decision and a date to reconvene in September.  So the outcome is still unwritten.

It was a frustrating result after weeks of mounting tension. But it means that all is not lost, and that there is still hope to save the Standing Rock Sioux's land. Construction at the protest site will supposedly continue to be halted, although it's not clear if that will be case for other parts of the projected pipeline path.

Meanwhile, human rights observers from Amnesty International announced they would be standing watch at the Sacred Stone Camp to ensure there were no more brutal police oversights depriving protesters of their legal rights to water or to assembly.

It's a small victory. But in a battle this big, it's better than nothing.

Environmental preservation isn't just an American Indian issue, of course. And it's not just about oil and water.

The future of the planet affects all of us, which is why this protest movement is so important. 2016 is already well on track to supplant 2015 as the warmest year on record, and the heat is only turning up from here.

I was taught to leave things better than I found them. We need to take action soon, or we'll be leaving a disaster behind for the generations to follow.

Learn more about the struggles at the Standing Rock Sioux reservation straight from the protest lines in this video: