Here are the do's and don'ts of faith, ripped from the headlines. 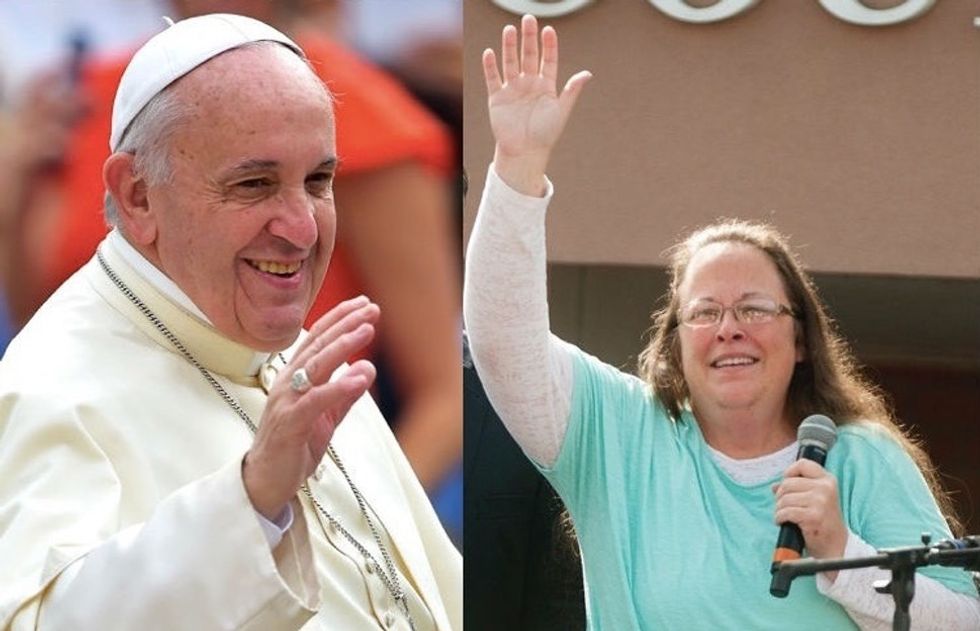 This week was a pretty big week for God in the news.

Well, OK. Maybe God wasn't the hot topic. But religion certainly was. There were two very big stories that seemed to have little in common, but both can teach us some important lessons about religion if we look closely enough.

The first was the saga of Kim Davis. The Kentucky clerk refused to do her job and sign marriage certificates for same-sex couples in the name of "conscience" and in doing so, she became a national symbol for anyone who opposes marriage equality on religious grounds.

According to Davis — who spent five days in jail and was greeted at her release by presidential candidate Mike Huckabee and hundreds of cheering, cross-waving supporters — it was her faith and her religious conviction that made her do it.

Contrast that with the second time that religion took center stage this week: Pope Francis encouraged every single Catholic parish in Europe to "take in one migrant family." The call to the region's approximately 120,000 parishes was made in response to the continent's ongoing refugee crisis, which has hit record levels and finally shocked the world into paying attention.

“In front of the tragedy of the tens of thousands of refugees escaping death by war or hunger, on the path towards the hope of life, the Gospel calls us, asks us to be 'neighbors' of the smallest and most abandoned." — Pope Francis

Why should we look at those two stories together? For sure, there are plenty of legal, political, and theological debates that can be had about both Kim Davis and Pope Francis.

But to me, the most interesting part of these two stories — and what connects them — is what they both can teach us about faith.

Strong faith can be a tremendous force for good in the world. It has helped provide education and basic needs for millions of people and has been a foundational component of civil and human rights efforts all around the world, the most famous of which is the 1960s American civil rights movement.

Photo via the Abernathy family/Wikimedia Commons.

But we also know that faith can be very dangerous. It has been used to justify things like slavery, the oppression of women, and most recently, the killing of gays all over the world.

How can something so good do such bad? Or, if you're not a person of faith, maybe you're wondering how something so bad can do such good.

I think of faith as the ideas and beliefs that people have about God. But religion is the tricky part — the rules and practices that humans created to figure out how to actually connect with their god.

In all the major world religions, the practices and rules were created in a very specific cultural context (like, for example, 2,000 years ago in "Bible times"). But when cultures change, which they're guaranteed to do, things get tough for religion.

The kind of faith that relies most heavily on religious rules often focuses on what I call the don'ts:

When people of faith make their primary agenda item a don't in order to maintain the cultural status quo, it can:

That is the kind of faith we saw on display in Kentucky this week.

But when faith focuses on the do's — working to solve problems, meet needs, and serve others — it ultimately wins.

Yes, that is Mother Teresa. Because ... of course. Photo by Roslan Rahman/AFP/Getty Images.

Do love your neighbor. Do feed the hungry. Do heal the sick. (Free health care anyone?) Do seek justice. Do practice humility. Do give more than you receive. Do take in thousands of refugee families.

Faith used in this way can:

The do's are where the magic happens. The do's are what we saw from the Pope this week. It's the do's that are currently behind the Moral Mondays movement for economic justice and the religious leadership in the Black Lives Matter movement, not to mention the thousands of organizations working to take care of the earth, provide for the homeless, and support women and families.

Kim Davis didn't save a life this week. The Pope just may have helped save thousands.

This tale of two acts of faith teaches an important lesson, not just for those of us who identify as Christian or religious, but for anyone looking for ways to use what they believe to make a difference. The world becomes measurably, tangibly, and practically better with the do's of faith. That, to me, sounds like a major win that all people — religious and not — can get behind.

How a middle school P.E. teacher is transforming the lives of his students

When Benny Mendez asked his middle school P.E. students why they wanted to participate in STOKED—his new after school program where kids can learn to skateboard, snowboard, and surf—their answers surprised him.

Never having seen snow is understandable for Mendez's students, most who live in Inglewood, CA, just outside of Los Angeles. But never having been to the beach is surprising, since most of them only live 15-20 minutes from the ocean. Mendez discovered many of them don't even know how to swim.

"A lot of the kids shared that they just want to go on adventures," says Mendez. "They love nature, but...they just see it in pictures. They want to be out there."

Mendez is in his third year of teaching physical education at View Park K-8 school, one of seven Inner City Foundation Education schools in the Los Angeles area. While many of his students are athletically gifted, Mendez says, they often face challenges outside of school that limit their opportunities. Some of them live in neighborhoods where it's unsafe to leave their houses at certain times of day due to gang activity, and many students come to his P.E. class with no understanding of why learning about physical health is important.

What Mendez can control is what he gives his students when they're in his care, which is understanding, some structure, and the chance to try new things. Mendez wakes up at 4:00 a.m. most days and often doesn't get home until 9:00 p.m. as he works tirelessly to help kids thrive. Not only does he run after school programs, but he coaches youth soccer on the weekends as well. He also works closely with other teachers and guidance counselors at the school to build strong relationships with students, and even serves as a mentor to his former students who are now in high school.

Now Mendez is earning accolades far and wide for his efforts both in and out of the classroom, including a surprise award from Yoplait and Box Tops for Education.

Yoplait and Box Tops are partnering this school year to help students reach their fullest potential, which includes celebrating teachers and programs that support that mission. Yoplait is committed to providing experiences for kids and families to connect through play, so teaming up with Box Tops provided an opportunity to support programs like STOKED.

Demonstrators hold up signs at the Rally for Abortion Justice in Columbus, Ohio

The U.S. Supreme Court's swing to the right under the Trump presidency puts abortion rights in peril throughout the United States. The Court's decision not to act on a Texas law that bans abortions after about six weeks has opened the floodgates for other states to restrict freedoms.

The Texas law deputizes its citizens to report those who've had an abortion after the fetus has a heartbeat or anyone who assisted in the process. Reporters whose information leads to a successful conviction can be awarded up to $10,000 by the state.

The law is astonishing in a state that claims to value freedom. What's more authoritarian than paying your citizens to snitch on each other for their personal health decisions?

Keep Reading Show less
abortion
Get stories worth sharing delivered to your inbox
By signing up you agree to Upworthy's privacy policy.
Trending Stories
comedy
Culture

A Black family in Virginia is being subjected to a bizarre, racist assault every time they step outside