Trump was asked about North Carolina's anti-LGBT law and had a surprising response. 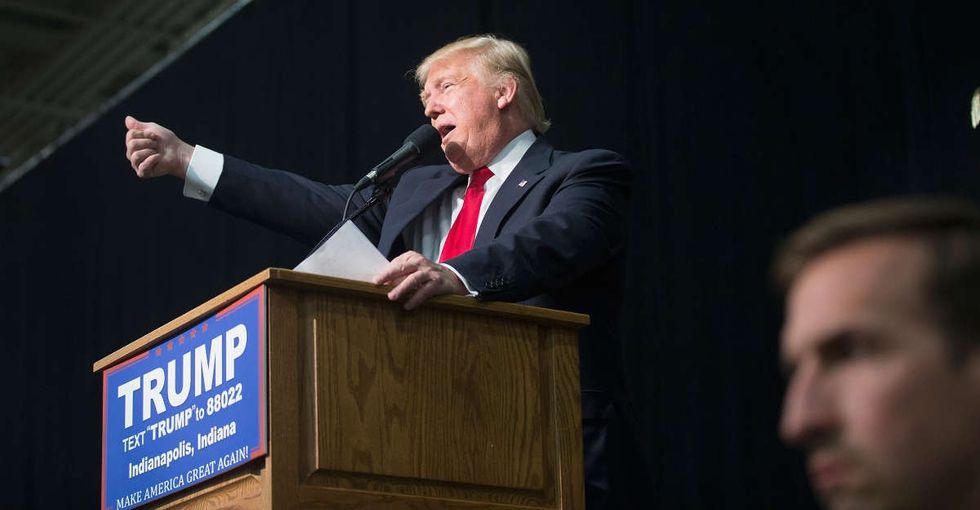 First, it was Mexican immigrants, who he labeled "drug dealers" and "rapists."

Then, it was Muslims, who he declared should be banned from entering the United States.

Photo by Michael B. Thomas/Getty Images.

So when "The Today Show" asked him about North Carolina's "bathroom law" that forces trans people to use the restroom that corresponds to the sex listed on their birth certificate, I braced myself for the worst.

The anticipated aftermath of Trump's answer. Photo by Steve Bunk/USDA.

Then he said this:

Matt Lauer proceeded to ask him if he would be OK with Caitlyn Jenner using "any bathroom she chooses" at Trump Tower.

"That is correct," Trump said.

It certainly seems like — and I can't believe I'm about to say this — Trump is ... right?

North Carolina's law is indeed pretty irremediably bad to say the least. A devastating Daily Beast report found that calls to a local suicide hotline for trans teenagers doubled after the law's passage. Businesses across the U.S. have pretty much universally condemned it, and some have even pulled jobs out of the state.

Just this week, the U.K. issued a travel warning, cautioning its LGBT citizens about visiting North Carolina and Mississippi, which passed a similar law on April 5.

But let's ... not be too hasty about giving Trump too much credit here.

His odd focus on why the law is bad for business, rather than — you know — people, is a pretty cop-out-y (though certainly on-brand) reason to oppose it.

He also went on to say that he saw no need to create new gender-neutral bathrooms.

And of course, one moment of relative humanity doesn't come close to negating all of the other terrible, destructive things he's said over the course of his campaign (take your pick).

However, his comments should put those who defend the law on notice.

Because if even this guy...

...a guy who has spent the last nine-or-so months spewing nonsense on policy while unleashing a steady stream of bigotry against pretty much everyone under the sun is opposed to it — and not even for a particularly good reason, but a reason nonetheless — then it really is an indefensibly terrible, no good, horrible, very bad law.

And it's time for North Carolina's HB2 to go.

UPDATE — 4/22/16: A few hours after his appearance on "Today," Trump told Sean Hannity that, while maintaining that he doesn't agree with the law, he believes that North Carolina had the right to pass it.