Trump wanted to look tough posing with bikers. It backfired in a major way. 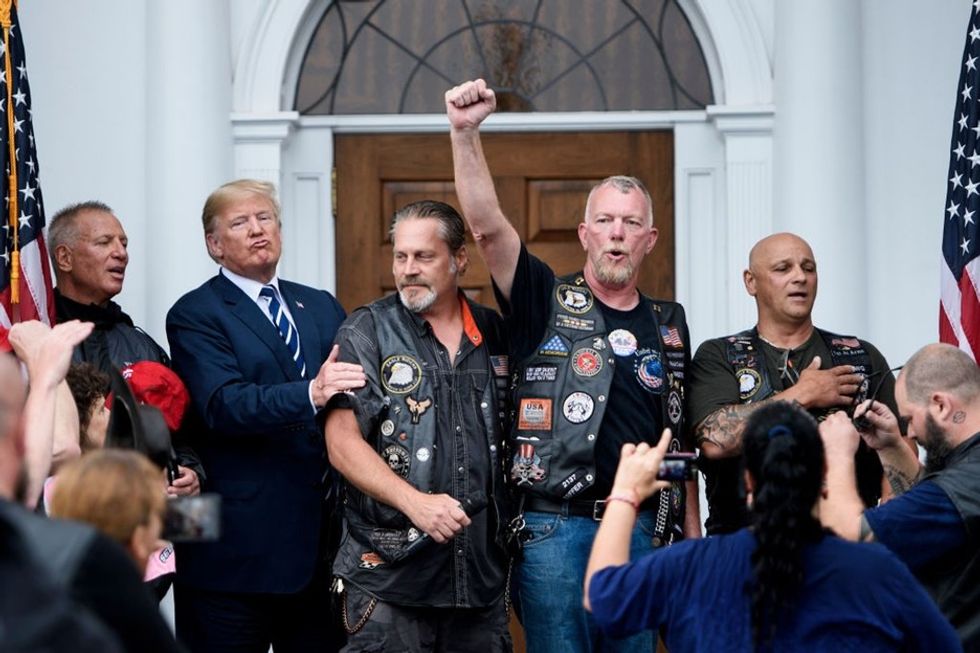 Notice anything wrong with this picture?

And no, we’re not just talking about Trump’s duck face pose.

During his latest vacation, the president posed for photos with supporters calling themselves “Bikers for Trump” during a visit to the Trump National Golf Club in New Jersey.

Motorcycles are cool, there’s no denying that. But Trump has a growing history of taking beloved things - football, LeBron James, and Harley's to name just a few recent examples, and politicizing them to toxic and polarizing levels.

After all, who can forget this photo (though we'd all like to)?

In this case, at least one of the bikers posing with Trump sported a sexist patch that also managed to embrace the worst aspects of gun culture.

The photoshoot sparked false claims of bikers with Nazi tattoos at the White House. But the reality is bad enough.

Trump’s biker photoshoot suddenly became controversial once eagle-eyed observers pointed out the offensive patch. Unfortunately, that led to a conspiracy theory going viral that Trump had appeared at the White House with a biker sporting a Nazi tattoo and promoted the whole thing from his Twitter account.

Fake news is never a good thing, but it’s sad that we live in a time when it actually takes a fact-finding investigation to conclude that Trump wasn’t posing for photos with literal Nazis during the anniversary of the Charlottesville racist march - he was “only” posing with open sexists.

And, oh yeah, there really was a "Bikers for Trump" supporter sporting a Nazi tattoo. He just happened to be at a different rally.

Men are struggling to define positive projections of masculinity. Guys like Terry Crews and The Rock show that clearly not all masculinity is toxic - and one of the manliest things you can do is to stand up against sexism, homophobia, racism and other forms of systemic discrimination.

Unfortunately, Trump is still tied to antiquated and false ideas of what it means to be a “real man.”