Tired of stereotypical girls' clothes, these women did something about it — then banded together.

Because girls are so much more than their appearances. 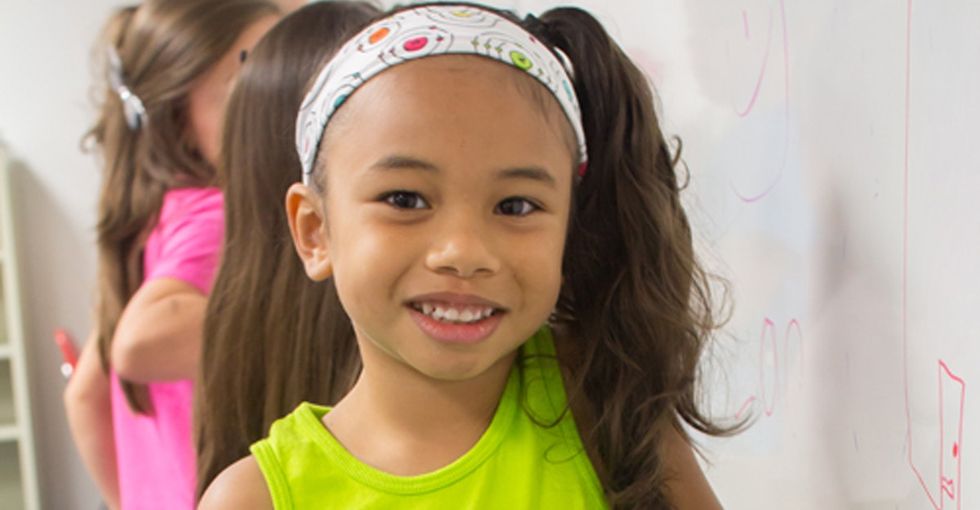 You might remember this photo that went viral back in April:

Original photo by Jason Y. Evans, shared with permission in this Upworthy post.

It was being sold in New York University's campus bookstore. The boys' equivalent to the girls' "I hate my thighs" baby onesie was "I'm super." (I mean, really?! That's some pretty pointed messaging.) After the photo went viral, it was pulled from the shelves with an apology for the oversight.

It was a T-shirt for girls that Children's Place was selling. There was no equivalent in the boys' section. After it was brought to the retailer's attention that it was pretty demeaning, they also pulled it from their store shelves. (Why it was printed in the first place remains a mystery.)

These are just a few incidents of extremely stereotypical girls' clothing. But it happens often enough, and a lot of girls' clothing is biased without being blatantly offensive.

Enter: a bunch of moms who were over it.

Done with it. They believe girls are — gasp — intelligent and capable and should be able to wear clothes that reflect their personalities without having to shop in the boys' section.

Even better, they want to give us clothing options to purchase for our girls that are done right, not just examples of what's gone wrong.

These moms have individually launched small businesses that create girls' clothing that allows girls to express who they are, whatever that may be.

And now, 10 of these small businesses have banded together to start a movement: #ClothesWithoutLimits.

"Over the past few years, multiple stories about kids clothing have gone viral," Rebecca Melsky, co-founder of Princess Awesome told me. "But they tend to focus on the negative. We wanted to let parents know there are more positive, more inclusive options out there for their children. We thought our voices would be louder together than they are alone."

"The awesome thing about working as a group is that it's shown all of us — and our customers — how many different ways there are to 'dress like a girl,'" Courtney Hartman, founder of Jessy & Jack and Free to Be Kids, shared with me.

The messages sure run counter to the ones that many mainstream retailers have offered — and they're exactly what our girls need.

This T-shirt, for example, is a nice (and totally opposite) option for girls who aren't so keen on acting like they're only good at shopping, dancing, and music — but not math, as with the Children's Place shirt:

T-shirt by Free to Be Kids. Photo provided by #ClothesWithoutLimits, used with permission.

'Cause here's the thing: Messaging is important. And when our girls are indirectly being told from every angle, including their clothing, that they're incapable of certain things, it starts to wear on them.

Malorie Catchpole of buddingSTEM explains, "When girls don't see dinosaurs, space, and other science themes on their clothing, it tells them that things like science and engineering aren't for them."

Not sure messaging matters? Think again!

A study shared by the New York Times, for example, found that many elementary school teachers have unconscious biases about girls' math abilities as compared to boys' — and it affects how they interact with them:

"The researchers concluded that in math and science, the teachers overestimated the boys' abilities and underestimated the girls', and that this had long-term effects on students' attitudes toward the subjects."

This isn't to place blame on teachers — we all have biases we don't realize about a variety of things. Instead, it's to point out those biases and create change. Because the study also "highlights how powerful a little encouragement can be for children," as the NYT notes.

And that's why clothing matters, too — clothing that lets girls express their interest in robots or dinosaurs or other science subjects, like this one:

T-shirt by Jill and Jack Kids. Photo provided by #ClothesWithoutLimits, used with permission.

Clothing that reminds girls they can be into anything they find interesting, like this:

Clothing that reminds girls they can actually be anything they want, like this:

T-shirt by Handsome in Pink. Photo provided by #ClothesWithoutLimits, used with permission.

And clothing that lets girls express many parts of themselves, like this atomic shells dress — because nobody said clothing that's empowering to girls can't also be in a style that's "traditionally" for girls:

And there's another message here — one that's less apparent but equally important: the strength of women banding together to empower our girls.

Many of these businesses seem to be in competition with one another, selling empowering girls' clothing. But that didn't stop the women from these 10 companies from joining forces and using their voices, which are louder and stronger as a collective, to get the message out there that clothes for girls shouldn't have limits.

"This is an amazing group of like-minded women who care deeply about breaking down the gender stereotypes in kids' clothing today," buddingSTEM Co-Founder Jennifer Muhm told me.

"This is an amazing group of like-minded women who care deeply about breaking down the gender stereotypes in kids' clothing today."

"We want all kids to be able to find clothes that fit who they are and what they like, but we're small businesses who can't possibly offer every single option on our own. ... There is definitely room for more than one option for girls who prefer blue, outer space, or dinosaurs. We just want parents to know those options exist, so they can find the one that's right for their child."

"We are ten brands, but behind those brands are more than ten women, and we are all strong leaders and really passionate about what we're doing," added Gina Dobson, founder of Sunrise Girl.

We have to be really mindful of making sure everyone's voice is heard and everyone is happy. The great thing is that our relationships with each other developed organically as we discovered each other's brands, and we have a lot of mutual respect."

"Working with a big group has its challenges but we know we are stronger as a group, and that working together we can have more of a positive impact."

"If one person or company isn't happy with something, or we can't easily arrive at consensus, we pause, get on a group phone call and talk it out until everyone is satisfied with the solution. Working with a big group has its challenges but we know we are stronger as a group, and that working together we can have more of a positive impact."

How's that for the kind of message we want our girls to receive? We're stronger together and we can work alongside one another and be successful. We're in this together.

That's a message, in addition to awesome clothing, that we can all get behind.

From Your Site Articles
Related Articles Around the Web
pets

Keep Reading Show less
family
Get stories worth sharing delivered to your inbox
By signing up you agree to Upworthy's privacy policy.
Trending Stories
culture
Family