When one employee saw these onesies, he almost lost it. Here's how the store responded.

At first glance, it's just a photo of two baby onesies. But when you take a closer look, you'll see why one employee wanted them taken off the shelves. 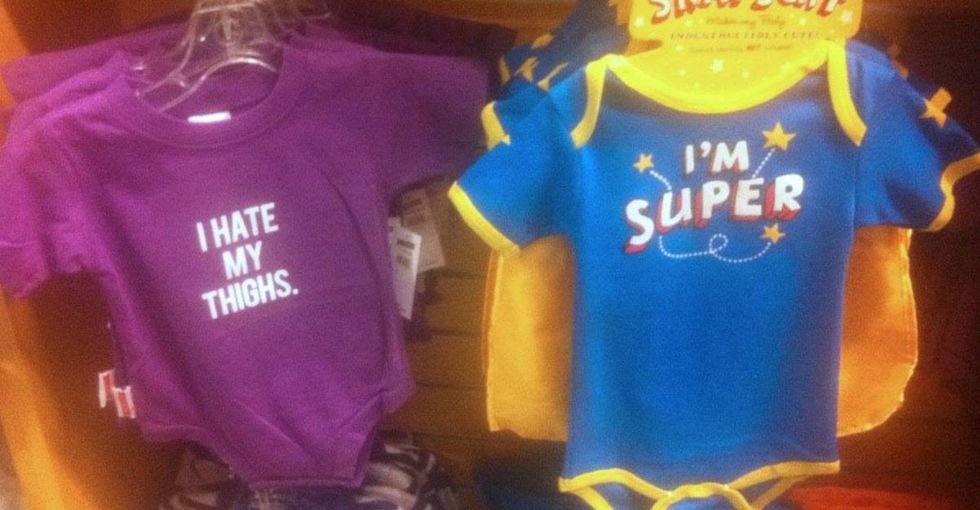 Jason works at NYU. While browsing the campus bookstore, he came across some disturbing baby gear.

As one is inclined to do in the age of social media, he snapped a photo and uploaded it to his Facebook page:


"I had a very difficult time not raging out about this in the college store. These are onesies ... for infants ... guess which one is for girls and which one is for boys. THIS is the problem."
— Jason Y. Evans

First things first: I'm not too keen on gendered toys, clothes, and products. More often than not, products geared toward women/girls are limited to "girly" shades like pink and purple, are needlessly more expensive, and, in this instance, reinforce negative ideas about body image and sexuality.

You might be thinking, "There's no way a baby could be influenced by what's written on its clothing." And unless there's a new crop of infants who are hooked on phonics before their first birthday, you're correct. But the issue here isn't just the onesies. The problem is the culture that thinks it's OK to encourage body shaming at any age. While "I hate my thighs" is no doubt a joke, consider how many women and girls struggle with disordered eating and how often women and girls are shamed for being too thin, too fat, too sexy, or not sexy enough. In reality, there's no reason to promote body shaming for anyone, no matter their age or gender.

When the post went viral, strangers, students, and alumni chimed in.

I was shocked when I stumbled across the post in my Facebook feed, but I was pleasantly surprised by what was happening in the comments. People weren't just getting mad, they were springing into action. And New York University alumni were demanding the school do better.

"It seems to have made it full circle to the NYU Bookstore ... but not before a few people made phone calls. It's also refreshing to see that I'm not the only one outraged by this kind of thing. #thereishope #whyineedfeminism"
— Jason Y. Evans

Turns out social media can actually do some good.

The NYU Bookstore responded almost instantly, pulling the "I hate my thighs" onesies off the sales floor. Commenters rushed to congratulate and thank Jason for sharing the photo.

"Never doubt that a small group of thoughtful, committed citizens can change the world; indeed, it's the only thing that ever has."
— Margaret Mead

For all the nastiness and disappointing interactions that happen on social media every day, this story has a happy ending we could all use. It's impressive to see people using platforms like Facebook to start important conversations and create real change. It might seem like only a tiny step, but it's important that as consumers and parents we're vigilant about counteracting the negative and one-diminutional messages on gender and body image.

Kudos to Jason for having the guts to speak up and to the NYU Bookstore for being willing to listen.