Those killed aren't the only victims of school shootings. Read this survivor's story. 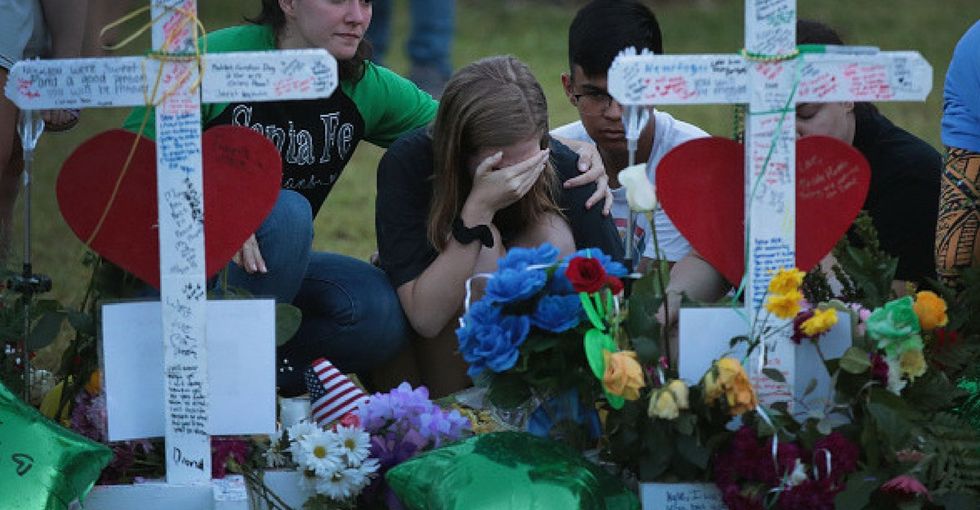 I'm not sensationalizing when I say this mom's Facebook post is one of the most difficult things I've ever read.

But I'm struggling to write this story because I can barely digest what I've read.

On the morning of May 18, a gunman opened fire in a Santa Fe, Texas, high school art class, killing eight students and two adults. Deedra Van Ness's daughter Isabelle was one of the students in that class. She watched her classmates die in front of her. Their blood was on her clothes. And now she and her family are dealing with the traumatic aftermath of it all.

In a Facebook note, Van Ness shared the details of that day and the days that followed, with Isabelle's blessing. She's asked the media not to request interviews, but she and Isabelle want their story to be told. And we need to hear it.

Van Ness started with the phone call she got from Isabelle after dropping her off at school.

"I noticed her name on the screen and figured she forgot something," Van Ness wrote:

"As I answer the phone, she is whispering and I can barely understand her. Then I hear her whisper ... mom, they are shooting up the school, I'm hiding in a closet. I love you mom. In the background, I hear gunfire. I beg her to stay on the phone and she says other kids with her want to call their parents and don't have phones. I beg her not to hang up as the call drops. I was frozen, standing there with no idea what to do next."

I'm a mom myself, and what Van Ness experienced is my worst nightmare. The phone call. The sound of bullets. The dread after hanging up.

But that part, I had pictured — that part, I could kind of wrap my brain around. It's the details from her daughter's perspective that gutted me.

Van Ness's story puts a traumatized human face on all of the mass shooting statistics and gun control debates.

After sharing the story of that day from her own perspective, Van Ness then starts over from the beginning, through Isabelle's eyes.

In all of the school shooting coverage current and past, I have never read an account that gave such a clear picture of what a firsthand witness and survivor goes through.

Van Ness shared that as the shooter began his rampage, Isabelle ran into a supply closet with a handful of other students. "As they are moving heavy items in front of the door," Van Ness wrote, "the gunman screams ... Surprise M*****F****** and begins shooting into the closet. The gunman hits 3 of the 8 kids in the closet ... killing 2 of them instantly. He leaves to chase other kids who ran out of the room and they hear more gun shots."

For 30 minutes, Isabelle lay on the floor of the closet next to her classmates' bodies, their blood seeping into her clothes. Then the police arrived.

And though that seems like it should be the end of the real trauma, it's far from it.

The kids who are killed in these school shootings are not the only victims. The trauma of the survivors needs to be part of the conversation, too.

The aftermath of the shooting that Van Ness shares is another story in and of itself. Isabelle doesn't want to shower now because the sound of the water hitting the tile triggers memories of sounds she heard in the supply closet. She's been struggling to connect with her friends who didn't share her experience. "Other students are bullying her on social media," Van Ness wrote. "Blaming her for not trying to do more to save her classmates, calling her a liar about what happened, etc."

And that barely scratches the surface. Van Ness's post is hard to read because the details make it feel too close, because we know it could be any one of our children. But we need these kinds of stories to remind us that school shooting statistics aren't just numbers — they are the real lives of children and families, changed forever by senseless gun violence.

Her post is long, but it's worth your time. Read the whole thing here: